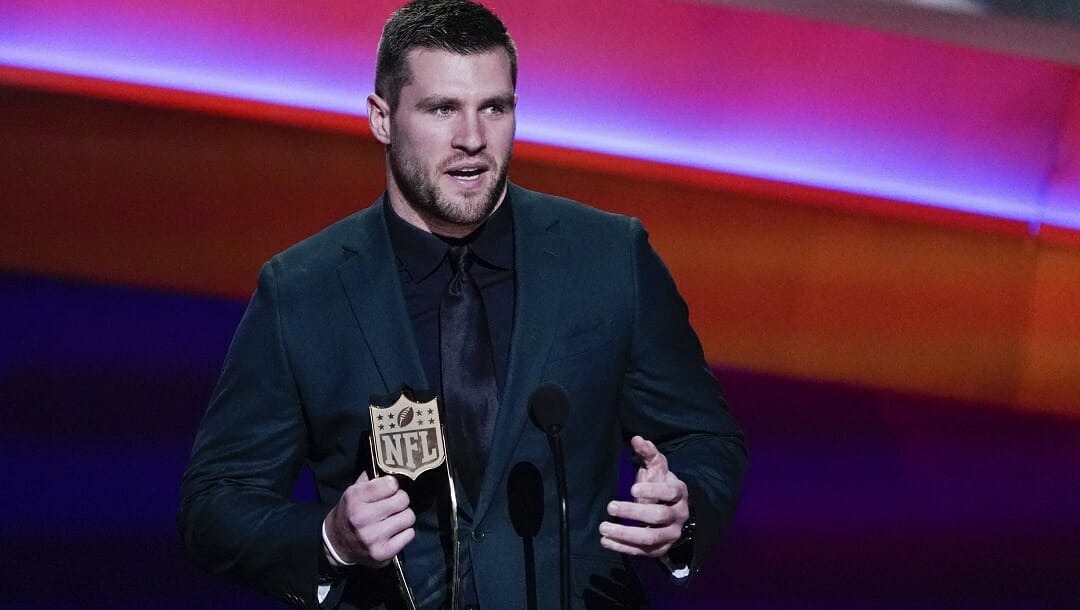 Yes, it’s most definitely the season of NCAA basketball odds, but I can skin more than one cat at a time. The NFL free agency period is just two weeks away, so I’m doing at least a little bit of 2021 NFL betting review and future forecasting.

I’m not diving into any Super Bowl odds for next season yet – though they are available now if you’re interested. Instead, I’m trying to get a sense of where the market was soft last year so that I can bookmark it for the off-season and have a plan for next year.

In that sense, I was surprised to see that BetMGM online sportsbook actually got roughed up a bit in the NFL Awards marketplace.

To explain my surprise I’ll explain the entire system of how sportsbooks make NFL odds. In short: large, open-ended markets like NFL MVP give bookmakers plenty of room to make the math work in their favor. There’s a reason I’m much more likely to bet a Super Bowl future than, say Defensive Rookie of the Year.

Yet this year, the sportsbook was dinged up, with multiple award winners dominating BetMGM’s handle for that specific market.

Let me give you all the details.

Amusingly, Aaron Rodgers – the obvious and most talked about candidate for any award this season – was one of the least damaging winners.

“I told Matt in my speech that 3 years together & 2 MVPs there’s no coincidences. I also told Shailene I’ve been with you for 2 seasons & won 2 MVPs.. that’s not a coincidence either” ~@AaronRodgers12#PMSLive pic.twitter.com/RX0fA7E2yQ

Rodgers’ MVP odds opened at +1100 and needed to rebound badly after the Packers’ strange Week 1 loss to New Orleans. He drew just 8% of tickets, as public bettors went after Patrick Mahomes and Tom Brady instead.

Rodgers eventually topped the market, while his ticket handle accounted for 25% of the overall market. Rodgers had the most handle of any MVP candidate.

Still, when you see some of the numbers for these other awards, you’ll understand why no one at BetMGM is sweating the Rodgers money.

The “Cooper Kupp is the Real MVP” movement had a real moment after the Rams wide receiver cashed in on his +550 Super Bowl MVP odds.

Somehow, I don’t think Kupp will mind too much, now that he’s got a ring and two new trophies – one of which is the NFL’s Offensive Player of the Year.

Kupp opened the year with +2500 odds in this market and was the only award-winner not to lead his market in ticket handle when the awards were announced. I have to think his position may have had something to do with that – so many bettors and football fans are accustomed to viewing receivers as one-dimensional tools for a quarterback.

Okay, now we’re getting into the red. T.J. Watt opened the year at +700 and was tabbed as a favorite pretty much all season. He tied the single-season sack record, as the Steelers’ defense pretty much single-handedly kept them in playoff position all year.

Unsurprisingly, Watt had far more DPOY tickets (23 percent) and handle (62 percent!!) than any other player in the market. It became obvious that Watt was the guy during the final month of the season, and bettors took advantage.

At 14-to-1 odds, Ja’Marr Chase didn’t exactly open at the top of the market here. There were a whole lot of quarterbacks taken in the 2021 NFL Draft, and the marketplace for offensive rookies had to start there and fan out.

Still, everyone had high expectations for what Joe Burrow and Chase would do. One-fifth of all Offensive Rookie of the Year tickets were on Chase, and his handle was almost double that.

While we’re here, let’s also go ahead and mention that Burrow’s win for Comeback Player of the Year also led the ticket handle, with 43% of the money on him.

This one was just laughable. There are serious NFL analysts who believe Micah Parsons wasn’t just the best rookie in the NFL but also the best defensive player on the Cowboys’ roster (and maybe even in the entire league).

I don’t know about all that, but there are clearly a lot of people who agree. A whopping 85% of the entire DRoY market was on Parsons, meaning the book got walloped particularly hard on this one.

NFL Odds: Coach of the Year

There was just too much narrative power in the Titans holding on to the No. 1 seed in the AFC playoffs without Derrick Henry.

With Arthur Smith now in Atlanta, Mike Vrabel opened in the middle of the pack for Coach of the Year at +2500, but it became clear in the latter half of the season that he would probably be the guy.

By season’s end, about a third of the Coach of the Year handle was on Vrabel.

NFL Awards: What to Know for the 2022 NFL Betting Season

To get back to my original point here, I’m thinking about how to use this information going forward. Every season is a unique outcome that is totally independent of other seasons, from a statistical point of view, so you can never read too much into anything.

Still, it did seem that several of this year’s winners – Watt, Vrabel, Chase – were fairly obvious entering the final quarter of the season.

I don’t think this is a market I’m ever going to bet pre-flop. But perhaps next year, when December rolls around, I’ll start looking at some of these NFL odds for awards and make a couple of selections.

The in-season odds will obviously have lost a great deal of their value, relative to the preseason, but I still think there will be a big angle to play with reduced market risk.