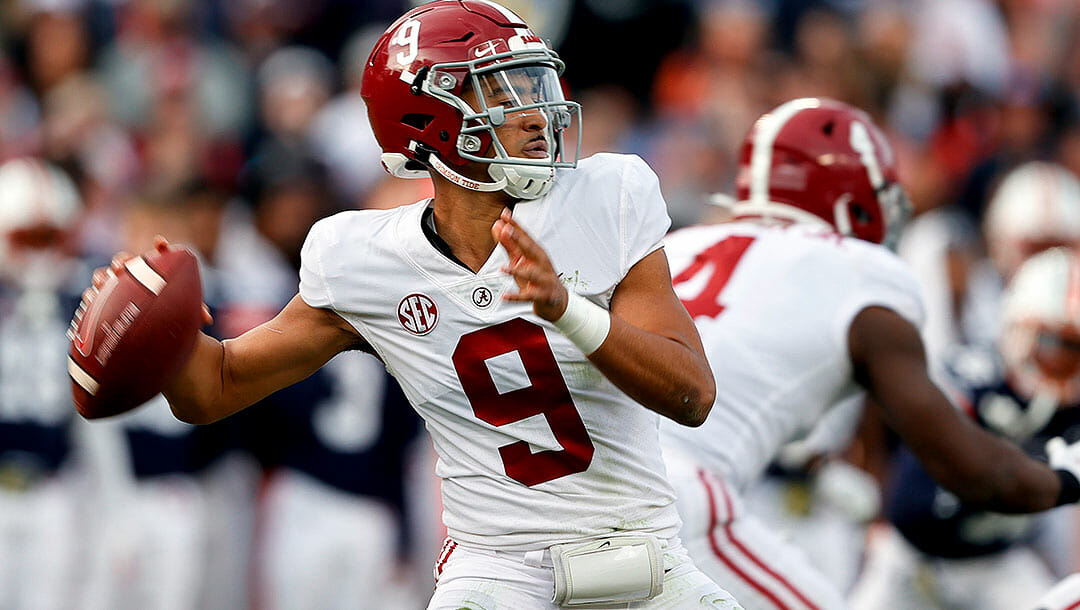 Despite losing to Alabama in the SEC Championship Game last month, the Georgia Bulldogs find themselves as favorites in the rematch. The latest college football odds from BetMGM are out, and college football bettors and fans have one more game to handicap.

Read on to review the current point spread, money line, and point total for the 2022 CFP National Championship Game.

Senior quarterback Stetson Bennett will lead the Georgia offense, and Bennett has put up big numbers this year. This year, Georgia has scored 30 or more points in all but one game that Bennett started, the SEC Championship Game against Alabama. Alabama’s quarterback is Heisman Trophy winner Bryce Young, who threw for 421 yards and three touchdowns against Georgia in their first meeting.

Bama’s leading receiver, John Metchie III, went down with a season-ending injury late in the first half in the SEC Championship Game. Alabama also has injuries along the offensive line. Starters Emil Ekiyor Jr. and Chris Owens suffered injuries against Cincinnati and remain questionable for Monday’s championship showdown.

The three-point spread in favor of Georgia makes a little more sense when considering Alabama’s injuries. However, Alabama played the second half of the SEC Championship Game without Metchie III and scored 17 second-half points in the 41-24 victory.

The injuries along Alabama’s offensive line are a concern, but both Owens and Ekiyor still have a chance to suit up against Georgia. I don’t think these injuries will affect Alabama enough to swing the game in Georgia’s favor.

This is only the second game this season Alabama has opened as an underdog. The first time was against this same Georgia Bulldogs team in their first meeting.

These teams held their semi-final opponents to a combined score of 17 points. Alabama held Cincinnati QB Desmond Ridder to 144 yards passing, while Georgia limited the Michigan rushing attack to 88 yards.

With the way these defenses performed in the semi-final, I expect a close, low-scoring game.

There are two reasons that I’m picking the Alabama money line in this game. First, the Crimson Tide still has an offense that can score against anyone. This season, Alabama has played three games against top-five scoring defenses. They’ve averaged over 35 points in those games. I don’t know if Alabama will score as many points in this game as they did the first time they played the Bulldogs, but I trust their offense more in a close game.

The second reason is turnovers. Alabama has a +9 turnover margin, which is 18th in the country. Georgia’s turnover margin is +3, which is 49th. In their last game against Georgia, the Crimson Tide forced two turnovers, both interceptions.

Both Alabama and Georgia have dominant defenses. The Bulldogs’ defense only gives up 9.64 points per game. The Alabama defense ranks 13th in points allowed per game at 19.21 but has held opponents to 17.33 points per game over their last three.

With that said, I don’t believe that these teams will score 65 combined points in this matchup. Both teams are top-five at stopping the run, with Georgia ranking third (81.4 yards per game) and Alabama fourth (82.1 yards per game). Georgia also allows the third-fewest passing yards at 171.7 per game.

Alabama also has some injuries in their secondary that could allow Georgia to hold on to the ball longer than they did in their previous game, which will give the Crimson Tide fewer opportunities to score. Starting cornerback Josh Jobe will be replaced by Kool-Aid McKinstry, and Khyree Jackson could replace Jalyn Armour-Davis. This could help Georgia convert more third downs than they did in the first game between the two schools when the Bulldogs went 3 for 12 on third downs.

I expect this score to be under because of Alabama’s injuries and both teams’ elite defenses.

Reviewing the Odds for the College Football National Championship

Both Georgia and Alabama are coming off relatively easy wins in the CFP Semifinals against strong competition. Now, they must face each other for the second time in three games. The Bulldogs have to overcome the kings of the SEC, Alabama. The Crimson Tide has to pull off two straight wins against the same opponent.

If you’re interested in betting on this game, you can wager on the spread or point total at the BetMGM online sportsbook. Create an account today and receive a risk-free initial bet worth up to $1,000.