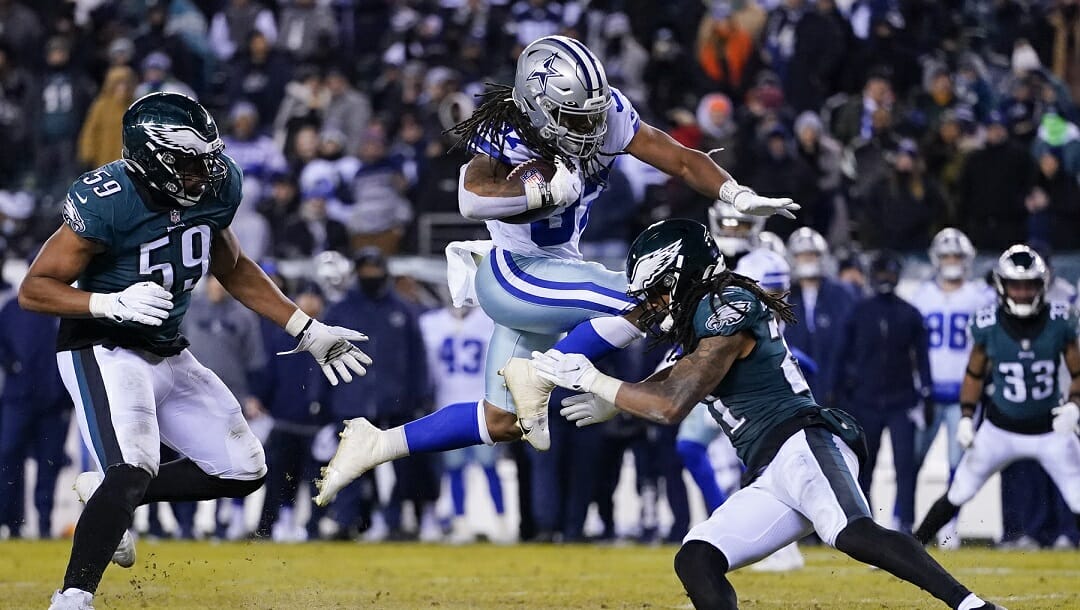 We’re about a month away from the opening of NFL training camps. For the Dallas Cowboys, it will signal the beginning of another season full of high expectations – fair or not.

Thanks in part to the league’s tenth-easiest schedule, BetMGM’s NFL odds price the Cowboys as +115 favorites to capture a second-straight NFC East division crown.

For the second consecutive year, Dallas will open things up against Tom Brady and the Tampa Bay Buccaneers. This time, the game will be in Dallas.

The Cowboys are 0-6 lifetime against Brady.

This game will be the first time the Cowboys have faced off against Cincinnati Bengals star quarterback Joe Burrow.

Dallas has not lost to Cincinnati at home since 1988.

Dallas’ first divisional game of the season comes on the road against the New York Giants on Monday Night Football.

Cowboys quarterback Dak Prescott is 9-2 in his career against Big Blue.

The Cowboys went 2-0 against Washington in 2021, which is the sixth time in the past 11 years they have swept the season series.

These two teams last met in 2020, ending in a 13-7 victory for the Rams at the height of the American COVID-19 pandemic.

The Rams are the sole team on the Cowboys’ schedule that does not have a losing record against them (18-18 all-time).

The Cowboys have won three consecutive games against the Philadelphia Eagles. They also won four straight against Philly from 2017-2019.

Dallas has won each of the past four meetings.

The last time the Cowboys lost to the Detroit Lions was at home was in 2011.

The Cowboys will host the Chicago Bears for the first time since 2016. That year was the rookie season of both Prescott and running back Ezekiel Elliott. Dallas won that contest 31-17.

Long-time Packers head coach Mike McCarthy will return to Green Bay for the first time since he was let go by the organization in 2018.

As many in the online sports betting community are likely aware, McCarthy roamed the Packers’ sideline for 13 seasons and led the team to a victory in Super Bowl XLV.

Dallas is 4-1 in its last five games coming off a bye.

Dallas is 3-0 in its last three trips to Minnesota, including last season’s 20-16 victory with backup quarterback Cooper Rush filling in for an injured Prescott.

The Cowboys and Giants meet on Thanksgiving for the first time in 30 years, which will also be the second meeting between the two teams for the season.

Dallas has lost three straight games on Thanksgiving, one short of matching the franchise-worst streak of four from 1986-89.

When the Cowboys take the field against Indy, they will have had ten days of rest and recovery.

These two teams last met in 2018, which ended with a 23-0 victory for Andrew Luck and the Colts.

It’s the Battle of Texas in Week 14, as the Cowboys square off with the Houston Texans.

Dallas is 2-0 at home all time against Houston.

This will be the Cowboys’ first game at Jacksonville in 16 years and third straight against an AFC South opponent.

Dallas heads to the City of Brotherly love for the year’s final meeting with the Eagles – a place where the Boys are 4-1 dating back to 2016.

This game will be the latest the Cowboys have ever faced the Tennessee Titans on the NFL schedule and will be broadcast on Prime Video.

As in years past, the NFC East could come down to the final week of the regular season.

Dallas has not closed out the regular season in Washington since 2014.