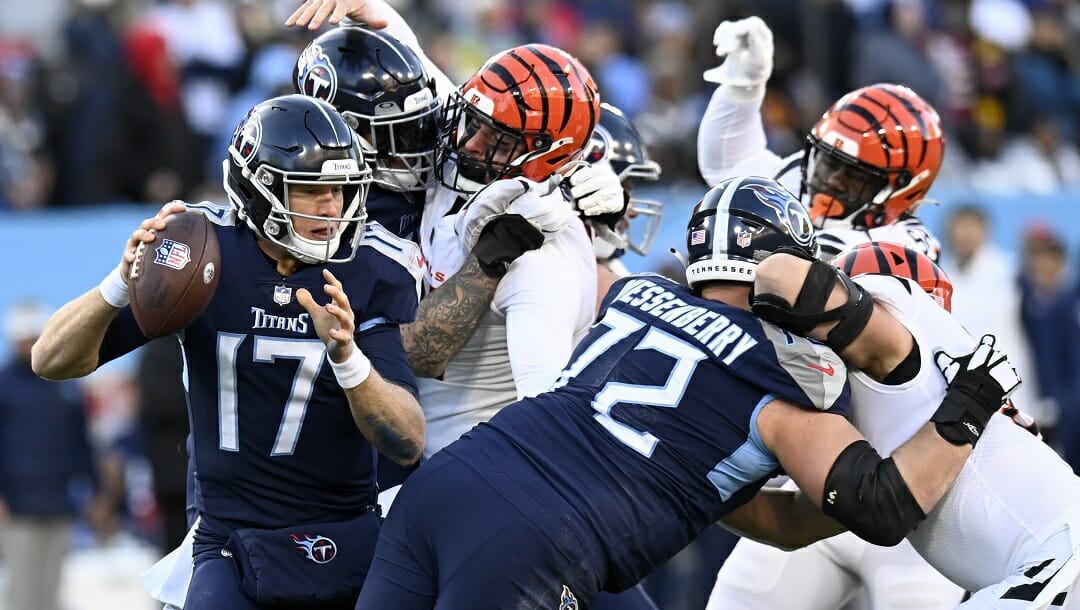 Two things can be true. This is the message for depressed Titans fans in the aftermath of the disappointing 19-16 loss to the Cincinnati Bengals in the AFC Divisional round on Saturday.

The loss raises significant questions about one key piece of the organization: What, if anything, can the Titans do with quarterback Ryan Tannehill?

Two things can be true. Tannehill has been a driving force of success for the Tennessee offense over the last three seasons, winning two division titles and reaching the AFC title game in the other. But he’s also the most glaring issue for a team that’s been one-and-done in the playoffs each of the last two seasons, including three costly interceptions against the Bengals.

Two things can be true. Tannehill is a solid, capable, middle-of-the-pack NFL quarterback who fits well into the Titans run-based, play-action offense. But he also needs the best running back on the planet and a top-flight defense to maximize his abilities.

He threw only 31 passes for a total of 159 yards combined in the Titans’ wins over New England and Baltimore en route to the AFC Championship against Kansas City in 2019.

Two things seem to be true. Tannehill will never become a postseason star capable of elevating his game to the highest level at the most important time but the Tennessee Titans don’t have any other options.

Derrick Henry returned against Cincinnati after missing two months of action and was somewhat effective. The Titans rushed for 140 yards on more than five yards per carry. The defensive line was elite, sacking Joe Burrow nine times and holding the Bengals to one touchdown.

That’s a game most teams should win.

The rest of the team did its job and Tannehill simply could not do his. Two interceptions in his own territory led directly to Bengals’ points and another came in the red zone – his NFL-worst fourth red-zone interception of the season (regular season and postseason).

Offensive coordinator Todd Downing deserves his share of the blame as well, making strange decisions all season right down to the final drive on Saturday in which the Titans could’ve won the game with a few first downs and a field goal. But he’s not the one with the football in his hands.

What should the Titans do with their solid, flawed, and very expensive starting quarterback?

Tannehill has a $38.6-million cap hit in 2022. There’s a zero-percent chance the Titans cut him; he carries a $57.4-million dead cap hit, and the Titans don’t have another quarterback under contract for next season. .

A trade seems almost impossible as well. If he’s moved before June 1, there’s still a $28.4 million dead cap hit. Is another team willing to take on his cap hit — and do so after the draft and free agency — 2022?

Two things are true: Moving on from Tannehill isn’t feasible for the Titans this offseason and this organization is still better off with him than without him.

The Titans were the best team in the AFC this year without their best player for half of the season and a record-setting level of player turnover. They are the two-time defending division champs and went to the AFC title game just three years ago.

This team expects to compete for the Super Bowl. However, they are stuck at the game’s most important position with a guy few believe is capable of winning that game.

Could they draft someone in April to be the heir apparent? Could they be in the big-game market with names like Russell Wilson or Aaron Rodgers? Could they find someone willing to wait until after June 1 to acquire their 33-year old, mistake-prone signal caller?

General Manager Jon Robinson has made big moves in his six-year tenure in Nashville, so none of the above can be ruled out entirely.

But odds are the Titans will run it back with the exact same guy that’s led them to the playoffs each of the last three years.

The question becomes: Can two things be true for Ryan Tannehill? Can a career journeyman also lead a team to the Super Bowl?