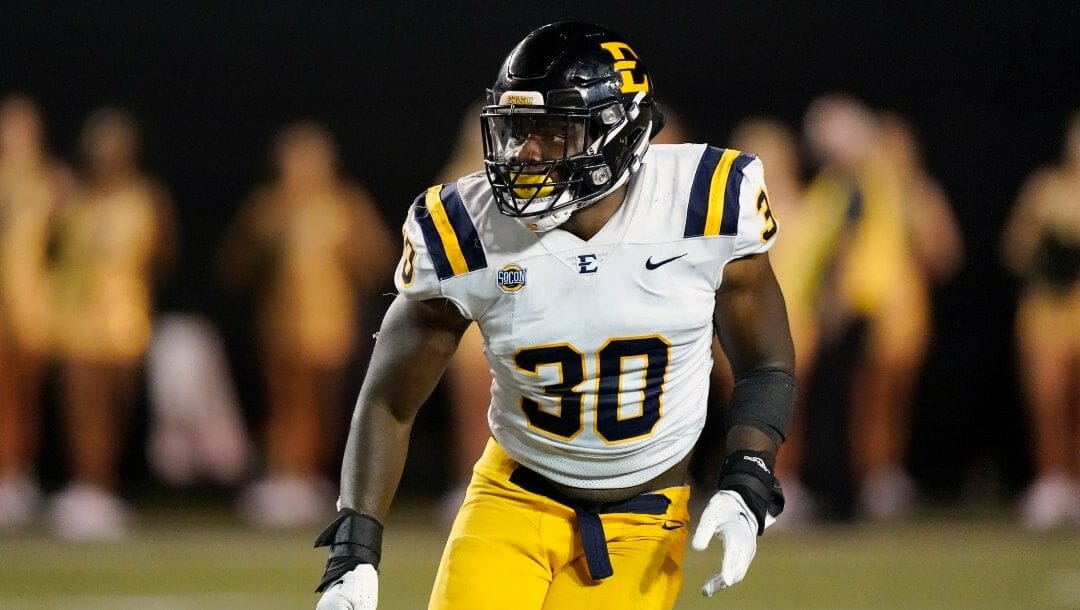 The number of FCS-to-FBS transfers this year has dropped considerably compared to the 150-plus players for the 2021 season. But still, several notable FCS All-Conference and All-American performers are heading to the FBS. These transfers are expected to make a difference in their new team’s success. One is even listed in the early college football betting odds to win the Heisman.

Brown has been one of the better cover corners in the FCS dating back to his freshman season in 2019. The 6-foot-1, 200-pounder had 77 tackles, four tackles for loss, six interceptions, and five pass breakups and was named a HERO Sports Freshman All-American.

Mims is a disruptive defensive lineman at 6-foot and 276 pounds. He was named a 2019 HERO Sports Sophomore All-American, a 2021 spring First Team All-Big South selection, and a 2021 fall HERO Sports Third Team All-American.

Turner was a three-year starter and three-time All-CAA selection for the Spiders. The 6-foot-3, 290-pounder led a stout defense and was highly productive for a big man.

Manuel has collected postseason honors since being named to the 2019 SoCon All-Freshman Team. He earned HERO Sports Sophomore All-American accolades in the 2021 spring and was a Third Team All-FCS All-American in the fall.

At 6-foot-1 and 230 pounds, Manuel is a steady presence in the middle of the field. Last season he totaled 124 tackles, 9.5 TFLs, three sacks, and two forced fumbles.

Jefferson overcame early obstacles in his collegiate career. After two stops at different colleges, he arrived at Sam Houston and became an FCS national champion in the 2021 spring season. Jefferson finished sixth in the FCS with 752 rushing yards while running for seven touchdowns in 10 games.

In the fall, he was named a HERO Sports Second Team All-American after rushing for 1,155 yards and 13 TDs. The 5-foot-10, 215-pounder is a physical runner who also has shiftiness and speed in space.

Shorts is imposing at 6-foot-4 and 335 pounds. A four-year starter, he helped pave the way for ETSU’s No. 8 rushing offense in the FCS last season. Shorts was named a HERO Sports Second Team All-American.

Hudson was one of the best downfield threats in the FCS for three seasons as part of UCA’s explosive passing attack. The 6-foot-2 receiver received HERO Sports Freshman, Sophomore, and 2021 Second Team All-American honors.

Verse dominated the FCS level in 2021, becoming one of the more feared edge rushers during the spring season. The HERO Sports Freshman All-American racked up 22 tackles, 10 TFLs, and four sacks in just four games.

The 6-foot-4, 247-pounder was at it again in the fall. Verse tallied 52 tackles, 11.5 TFLs, 9.5 sacks, and 13 quarterback hurries. After entering the transfer portal, he received offers from the likes of Texas, LSU, Florida, Oklahoma, USC, Miami, and several more before signing with Florida State.

Wells became a fan favorite for the JMU faithful as a true freshman in the spring 2021 season. “He could go down as one of the best receivers in program history … if he sticks around for four years” was the general thought.

Wells was an FBS-level player, and even though the Dukes will become an FBS member in 2022 as they join the Sun Belt Conference, he entered the transfer portal. The Power 5 offers came soaring in from Louisville, Auburn, North Carolina, Virginia Tech, Mississippi State, Miami, and others.

Despite playing in only 22 games, Wells ranks third all-time at JMU in career receiving touchdowns (21) and ninth all-time in career receiving yards (1,853). He was a HERO Sports Freshman All-American in the spring and a Second Team All-FCS All-American in the fall. At South Carolina, the 6-foot-1 target will be catching passes from another transfer in Spencer Rattler.

Ranked the fourth-best transfer quarterback by 247Sports, Ward has high expectations at WSU. He is already in the top 20 college football odds to win the Heisman in 2022.

He played two seasons at UIW, earning HERO Sports Freshman All-American honors in the spring and Sophomore All-American honors last fall. He won the Jerry Rice Award as the top FCS freshman, and in his second season, he threw for 4,648 yards, 47 TDs, and 10 interceptions in 13 games.

Ward went from two D1 offers to quickly being one of the most electric players in the FCS. Now he’ll look to do the same in the FBS.