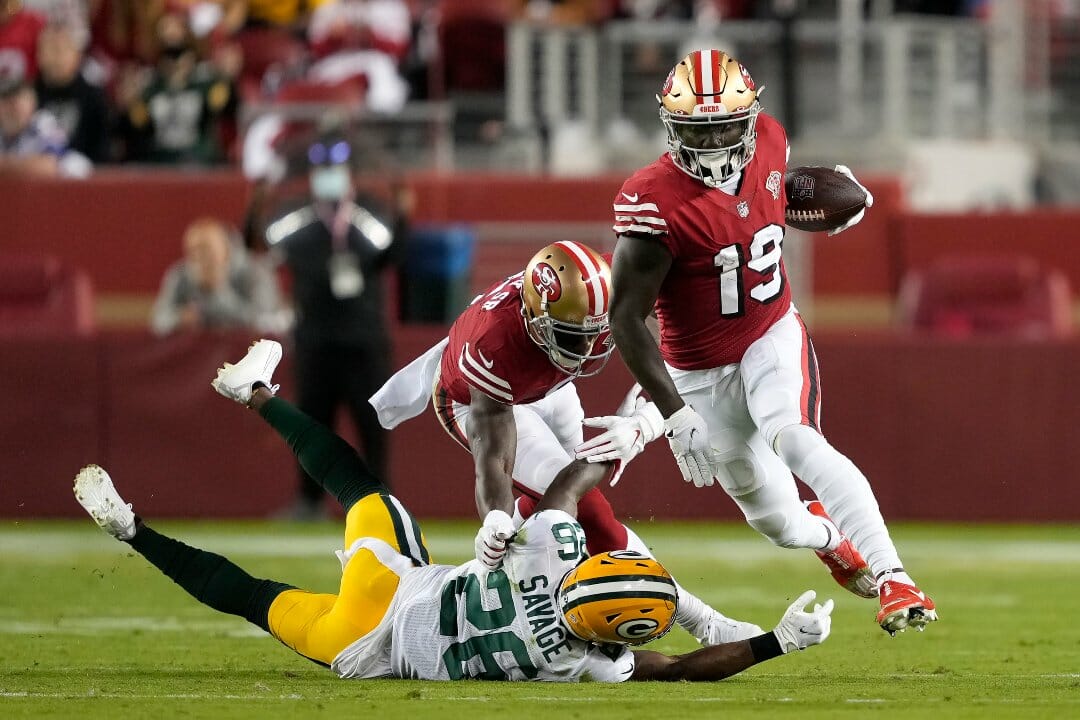 BetMGM’s latest NFL betting lines have the Packers as 5.5 point favorites in this game.

Will the Packers cover, or can the Niners pull off an upset? Here are some of my predictions for this game.

Before we get to some betting predictions, here is what you need to know about this game:

I am not saying that the 49ers will win this game outright, but there are reasons to believe they’ll hang with the Packers. The first reason is the rushing defense. San Francisco gave up the seventh-fewest rushing yards per game in the regular season (103.5).

Green Bay relies on their rushing attack to keep opposing defenses off-balance, averaging 111.8 rushing yards per game. However, in their only two losses where QB Aaron Rodgers played a full game, they were held to under 100 rushing yards. When these two teams played in the regular season, the Packers ran for 100 yards. Green Bay won that game by just two points.

Another crucial factor for the 49ers is whether QB Jimmy Garoppolo can avoid interceptions. San Francisco is 7-0 when Garoppolo takes care of the ball. However, the Packers are a ball-hawk defense, intercepting opposing passers 18 times.

There is hope for a clean game from Garoppolo. He only threw one interception against the Cowboys last week, the team that led the league in interceptions (26).

The 49ers have a great chance to cover if their rushing defense can neutralize the Packers’ running game and Garoppolo avoids any blunders.

Neither of these teams went over point totals very often this season. Combined, they are 19-16 on the under.

The two sides give up just over 43 points per game combined. San Francisco also allows the third-fewest total yards per game in the NFL at 310. Green Bay also has the third-best turnover differential at +13.

Both teams run the ball well. The 49ers rank seventh in the league in rushing yards per game (127.4). They also rank fifth in rushing attempts per game, averaging 29.8 runs per game. Last week against the Cowboys, the Niners ran the ball 38 times.

Early weather reports predict wind chills of zero degrees with wind gusts of 20 MPH for Saturday’s game at Lambeau Field. While inclement weather in Green Bay isn’t unexpected, these weather conditions could force both teams to run the ball early and often.

Who do you think will cover in the 49ers at Packers game? Do you agree with my picks above?

You can make your picks right here at BetMGM, a safe and reliable site for all of your online sports betting needs. Create an account today and receive an initial risk-free bet worth up to $1,000.