Can Aaron Rodgers Win the Super Bowl and MVP This Season? 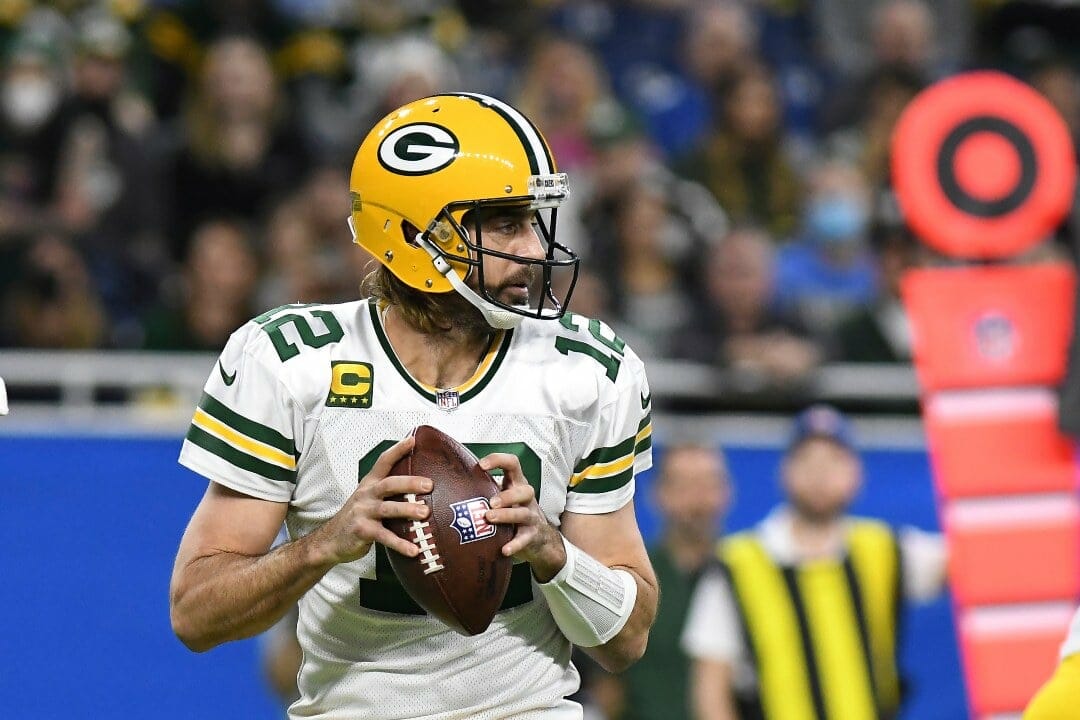 Green Bay Packers quarterback Aaron Rodgers led his team to the best record in the NFL and home-field advantage throughout the playoffs. Now, Rodgers has his eyes set on the Super Bowl and a possible fourth NFL MVP award.

According to the NFL betting odds, the Green Bay Packers are also the current favorites (+375) to take home the Lombardi trophy. So, can Rodgers win the MVP and the Super Bowl in the same year? Read on to find out how his odds stack up against the competition.

Aaron Rodgers led the Green Bay Packers to a 13-4 regular season, and his stats present a serious MVP resume.

Compare those stats to Tampa Bay Buccaneers QB Tom Brady, another MVP front runner. Brady threw for a league-best 5,316 yards and 43 touchdowns. He also threw 12 interceptions and completed 67.5% of his passes, more than an entire percentage point lower than Rodgers.

Brady’s Bucs also went 13-4 in the 2021 regular season and earned the second seed in the NFC. Despite fantastic play by both QBs, I believe Rodgers has the edge because of his efficiency and fewer turnovers.

Home Field Advantage is Huge for the Packers

Lambeau Field is a serious advantage for the Packers. The Packers play the San Francisco 49ers at home this week, and early weather reports say the game might be one of the coldest playoff games in NFL history. Almost any team coming to Green Bay will have to deal with harsh conditions in January.

I believe that Green Bay will have the upper hand even if the Packers face Tom Brady and the defending Super Bowl champion Tampa Bay Buccaneers. The Bucs WR Chris Godwin is on IR with a knee injury, and several other offensive playmakers like RB Leonard Fournette are day-to-day with other injuries.

The 49ers rank in the top ten in the NFL in both total yards gained and yards allowed per game, but they looked sloppy towards the end of their Wild Card matchup against the Dallas Cowboys. 49ers quarterback Jimmy Garoppolo almost gave the game away with a fourth-quarter interception, and now he’ll face a healthy Green Bay defense.

The Packers’ two-time Pro-Bowl linebacker Za’Darius Smith hasn’t played since Week 1 but should be available against the 49ers. If the Packers’ defense plays well and the home crowd makes it difficult for San Francisco’s offense to communicate, Green Bay could be in line to win its first NFC Championship since 2010.

Rodgers and the Pack have home-field advantage in their quest to represent the NFC in Super Bowl LVI.

Do you think Rodgers and the Packers will bring home the Lombardi Trophy this year? You can bet on the NFL MVP race and Super Bowl at the BetMGM online sportsbook. Create an account today and receive a risk-free initial bet worth up to $1,000.