Will the AFC Championship Over-Under Go Over the Point Total? 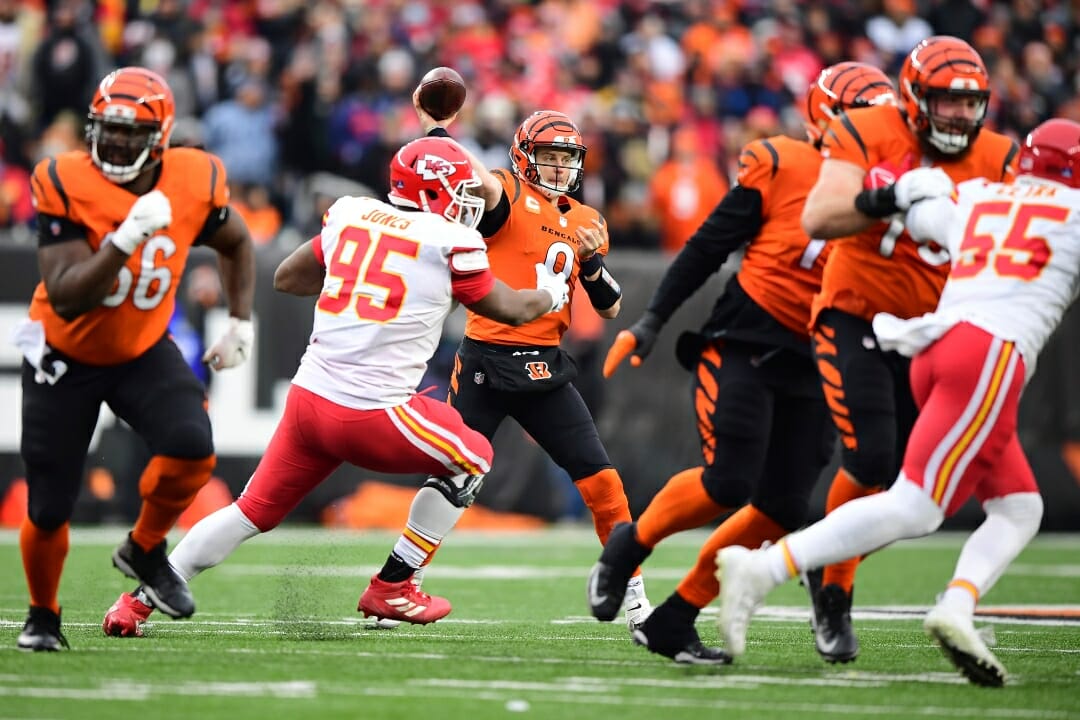 The AFC Championship game on Sunday is a rematch between teams that met just 28 days prior.

The Cincinnati Bengals, who entered the season with low Super Bowl odds, have found themselves one win away from the Super Bowl. To get there, they’ll have to beat the Kansas City Chiefs, a team playing in their fourth consecutive AFC Championship game. The current NFL betting odds show the Bengals as 7.5 point underdogs. The over-under is sitting at 54.5.

Both teams have their explosive offenses, so let’s see if they will light up the scoreboard and blow by the AFC Championship over-under in pursuit of a Super Bowl berth.

Cincinnati averages 26.6 points per game, good enough for eighth-best in the NFL.

RB Joe Mixon led the team in scrimmage yards and touchdowns with 1,519 and 16, respectively.

Meanwhile, quarterback Joe Burrow led the league in completion percentage and yards per pass attempt this season. His favorite target was Ja’Marr Chase, whose best game this season came against the Chiefs in Week 17. He caught 11 passes for 266 yards and three touchdowns in the 34-31 win.

Their biggest obstacle offensively is protecting Joe Burrow, who was the most sacked quarterback this season and was brought down nine times last week.

They allow 21.6 points per game on defense, which is 13th in the league. They are strong against the run, allowing the eighth-fewest yards. However, in the first matchup, Kansas City got 155 yards on 23 carries.

Although Cincinnati allows the 26th most yards through the air, Patrick Mahomes only tallied 259 pass yards in the first matchup.

Andy Reid’s team is fourth in scoring this season, averaging 29.7 points per game. They’ve put up 42 points in both of their playoff games, including their divisional-round matchup against the Buffalo Bills, who had the best scoring defense in the regular season.

They’re led by their passing attack, averaging 39.9 attempts per game. Mahomes is fourth in passing yards and touchdowns with 4,839 yards and 37 touchdowns.

Despite not being known as a running team, they are seventh in yards per rush attempt and 15th in rushing yards per game. Over their past three games, they’ve averaged 141 rushing yards. As I mentioned above, the Chiefs run game was surprisingly effective in these teams’ Week 17 contest.

In the first game against the Bengals, they scored 28 points in the first half but only mustered one field goal in the second half.

Kansas City’s defense allows 22.2 points per game and 5.8 yards per play, which is the fifth-worst mark in the league. They also had the fourth-fewest sacks of the season.

Their success defensively is predicated on takeaways. They ended up with 29 in the regular season, which was fifth in the NFL.

Based on how these teams typically play and how they played each other weeks ago, I expect them to exceed the AFC Championship over-under in another exciting game.

To bet the point total, spread, and much more for this AFC Championship game, check out BetMGM, the best online sportsbook. Sign up for an account today for a risk-free initial bet of up to $1,000.