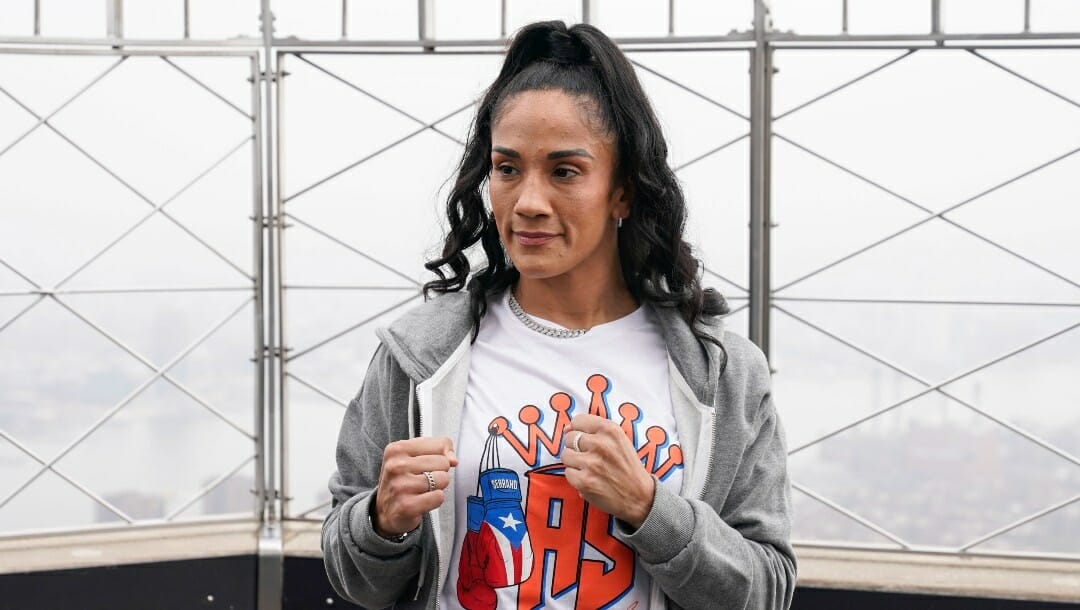 Fresh off her fourth lightweight win (and 42nd overall victory) over Miriam Gutierrez in December of 2021, Amanda Serrano will finally meet Katie Taylor Saturday, April 30, to determine the undisputed queen of the 135-pound weight class.

Serrano is the favorite in the boxing odds at -140 (as of April 29) to be the first opponent to beat Taylor in the professional ranks.

Here’s an overview of her impressive record, which shows why she is favored when it comes to boxing betting odds.

Amanda Serrano was born in Puerto Rico but now resides in Brooklyn, New York. She gravitated toward boxing because of her older sister, Cindy, whom she saw competing growing up. Because of her persistence in pursuing the sport, she made her formal entry into the amateur ranks in 2008.

Shortly after this success in the amateur circuit, she decided to compete in the professional scene in 2009. She competed in the featherweight division and hovered around in other weight classes.

The Puerto Rican world record-holder made her professional debut in 2009 against Jackie Trivilino and scored a majority decision win. After that monumental debut victory, Serrano went on a 12-fight unbeaten streak, picking up 11 wins (including seven KO/TKOs) and receiving a draw over those two years.

Serrano picked up her first-ever title during her 13th professional bout when she TKO’ed Kimberly Connor in the second round of their IBF World Female Super Featherweight Title showdown in August of 2011. She then picked up two more wins over Grecia Novas Mateo (fifth-round TKO) and Ela Nunez (unanimous decision) before stumbling into her only professional defeat.

The ‘’Real Deal’’ suffered her first and only loss at the hands of Frida Wallberg in April of 2012 via unanimous decision where she failed to get her second title. But this setback only prepared Serrano to reach her full potential by going on a dominant run and winning a record-setting seven division titles.

In 2016, the 33-year-old fighter became the only second Puerto Rican boxer to claim four titles in four different divisions after beating Olivia Gerula and Alexandra Lazar, both via TKO, and adding the WBO World Female Featherweight Title and WBO World Female Super Bantamweight Title to her collection.

Despite all the success she had in the bantamweight and super bantamweight divisions, Serrano strived for more titles and moved up to the 140-pound division in 2018, where she triumphed over Yamila Esther Reynoso in their the WBO World Female Super Lightweight Title bout to solidify her place as the first and only woman boxer to win six titles in six different weight classes.

After that historic win over Reynoso, Serrano further cemented her place in the record books by going down to the 115-pound weight class and claiming another title over Eva Voraberger.

This incredible ability of the 2016 and 2018 Female Boxer of the Year Awardee to still carry the same knockout power that she has in any weight class has made her the favorite to win in the lightweight mega-fight this Saturday against undefeated Irish star Katie Taylor.

Serrano has a 68% finishing rate in her 43 career fights, mainly thanks to her signature right hook, making her a pound-for-pound champion across seven divisions.

This powerful right hook is also the primary weapon that the Puerto Rican sensation should use to gift Taylor her first-ever professional career loss and be crowned the undisputed lightweight champion of the world.

If you stand to bang with me it won’t be fun for you, I’m a Different type of beast. My punching power allows me to NOT need an additional minute to get the job Done. FACTS!
Ppl lie Numbers Don’t 😉 pic.twitter.com/IEGWUBGk18

If Taylor manages to pull off the win this weekend, her case to be called the greatest female boxer of all time will be parallel to her moniker – the ‘’Real Deal.’’

Where to watch Amanda Serrano’s fight

You can watch Amanda Serrano’s fight when you subscribe to DAZN and sign up here. DAZN subscribers can stream the fight on multiple devices, including mobile devices, TVs, and gaming consoles.