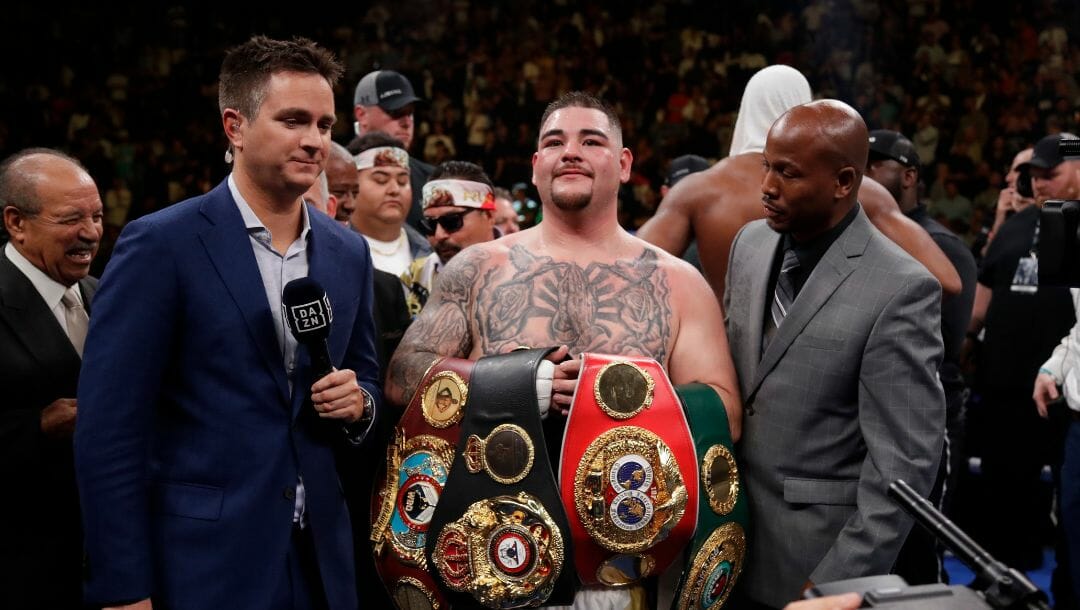 The Crypto.com Arena will be in for a boxing treat this weekend as two of the most hard-hitting heavyweights today go head-to-head in an entertaining match. Former heavyweight champion Andy Ruiz Jr. (the boxing betting odds favorite at -350) will take on the challenge from former world title challenger Luis Ortiz (the underdog at +275) to boost their respective rankings in the stacked division.

Both fighters are coming off wins, with Ruiz Jr. unanimously winning over Chris Arreola in his previous fight in May 2021, while Ortiz is riding a two-fight streak with stoppage victories over Alexander Flores (November 2020) and Charles Martin (January 2022). Despite the two consecutive wins, Ortiz looks to defy the big boxing odds stacked against him.

A STACKED #LaborDayWeekend fight card headlined by a heavyweight showdown between former unified champ @Andy_destroyer1 and top contender Luis Ortiz is coming your way this SUNDAY 9/4 live on PPV from @cryptocomarena!

This will be Andy Ruiz Jr.’s 37th professional fight since making his professional debut in 2009. Ruiz captured his first boxing title in 2013 when he defeated Joe Hanks via a fourth-round TKO to win the WBO Inter-Continental Heavyweight crown. He added the North American Boxing Federation Heavyweight Title in his next match by stopping Tor Hamer in the third round of their showdown.

After multiple defenses of his minor titles and an eight-fight winning streak, Andy Ruiz Jr. was granted his first major title opportunity in December 2016 when he challenged Joseph Parker for the WBO World Heavyweight Title, but he came up short after absorbing a majority decision loss. Since that close championship loss, Ruiz Jr. picked up three wins over Devin Vargas, Kevin Johnson and Alexander Dimitrenko.

Those morale-boosting wins were of immense help as the Imperial, California native was called to be the replacement opponent of Anthony Joshua in June 2019, where he fully capitalized on the second opportunity to call himself a champion. Ruiz Jr. engineered a massive come-from-behind upset victory to capture the IBF, IBO, WBA and WBO World Heavyweight Titles with a seventh-round TKO of Joshua.

His title reign lasted only six months as Joshua reclaimed his titles with a dominant and lopsided revenge win in their December 2019 rematch. The ”Destroyer” had an 18-month hiatus from boxing after that loss before he returned in May 2021 and masterfully defeated Chris Arreola.

Meanwhile, Luis Ortiz is gunning for the last title run in his career after Deontay Wilder spoiled his two attempts at being a world champion. Ortiz won several continental boxing titles and amassed a perfect 21-0 record since becoming professional in 2010.

”King Kong” received his first major title match in September 2014 when he faced Lateef Kayode for the WBA Interim World Heavyweight Title. Ortiz scored a first-round TKO stoppage over Kayode but was immediately overturned because he failed a drug test which nullified his win. Two fights later, Ortiz won the WBA interim again with a third-round knockout of Matias Ariel Vidondo.

That interim status was never upgraded to a regular title. Ortiz needed five more wins over Bryant Jennings, Tony Thompson, Malik Scott, David Allen and Daniel Martz to finally crack a world title shot. But that world title hopes were crushed by Deontay Wilder, who gifted him with a tenth-round TKO loss in March 2018.

The Cuban star strongly bounced back from that title loss and picked up three wins over Razvan Cojanu, Travis Kauffman and Christian Hammer to earn another shot at Wilder’s WBA title. But Wilder might just be the hump he can’t get over as he sustained another loss at the hands of the ”Bronze Bomber” in November 2019, this time, a seventh-round knockout finish.

Both Ruiz Jr. and Ortiz are known knockout artists, with the former having 61% of his fights stopped and the latter with a higher 75% rate. The Cuban boxing star, though, will have the physical frame advantage as he is two-inch taller and four-inch longer than the Mexican-American slugger.

Stylistically speaking, this will be an intriguing match-up. Andy Ruiz Jr. will be bringing his lethal combination that swarms his opponent. This combination is backed by the speed and quickness that only a few heavyweight fighters possess. Expect the ”Destroyer” to fully utilize this swiftness to rain down punches on his older foe.

On the other hand, Luis Ortiz would bring his wealth of experience and boxing smarts to counter and neutralize the barrage of punches from Ruiz Jr. His bread and butter is the one-two punch combination, with him throwing a right-hand jab to close the distance and following it up with his powerful left-hand punch that puts his opponents to sleep.

Both also have different tendencies to leave themselves open and vulnerable. This was visibly seen in their previous fights, where Ruiz Jr. and Ortiz countered perfectly. This match is a showdown of who will land first on their opponent because that will determine the winner.

If Any Ruiz Jr. landed early on his patented rapid combinations, it would be hard for Luis Ortiz to recover as he crowds him with more punches even before he recovers. But if Luis Ortiz could counter him with his thunderous left-hand punch, then it would be a different story because although he is already in his 40s, ”King Kong” still has the power to knock the ”Destroyer” out.