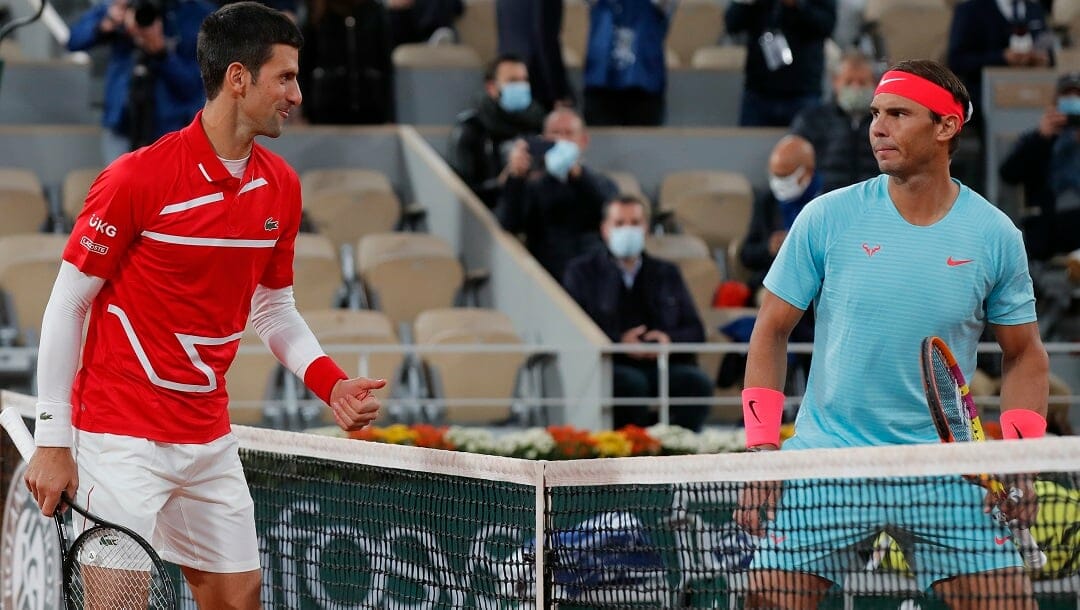 Most tennis betting experts agreed when this year’s French Open men’s draw was announced that Rafael Nadal and Novak Djokovic were on a collision course for a quarterfinal contest.

One week into the main part of the French Open, that’s exactly what we’ve got.

Even for those who don’t really follow tennis, this match likely needs no introduction. Nadal is the aging Spaniard with an incomprehensible 13 French Open championships to his name; Djokovic is the reigning champ, still in his prime, who vanquished Nadal in the semifinal round last year.

Djokovic has played Nadal a whopping 58 times throughout his career. This will be far from the biggest match of their respective careers, as it’s not the French Open Men’s Final. (Or any other major final, for that matter.)

And even with the No. 1 player in the world sidelined by the Australian government, Nadal still needed a massive comeback in the championship round to slip past Daniil Medvedev.

So don’t anoint this as a vintage Big Three tennis showdown. It’s not quite that.

Still, any time Djokovic and Nadal are standing across the court from each other, the tennis world is watching. And wherever you find big-time tennis matches, you can be sure the online sports betting contingent is not far away.

Right away, the French Open odds for this particular match jump out at you. Nadal has won 13 of the last 17 major tournaments at Roland Garros, which means he’s only failed to win in Paris four times dating back to 2005. One of those four – 2016 – was a withdrawal.

Another was last year’s semifinal loss.

That leaves only two times since 2005 that Nadal has failed to advance to the Final Four.

Given his dominance on this particular court, the fact that Nadal is a +175 underdog is noticeable and hugely important to the handicap.

Nadal, sadly, just is not in his prime anymore. For most of his career, he’s been completely invulnerable on clay; compare that to his most recent match on Sunday, in the fourth round of the French Open, where he was taken to a fifth set by Felix Auger-Aliassime.

Aliassime is a very good player whose current No. 9 ranking is a career-best. But Felix, a Canadian, is generally viewed as more of a hardcourt player. Prior to this year, he’d never advanced past the first round of the French Open.

In past years, this would be the sort of high-profile tennis pelt that Nadal would easily collect en route to another championship. Instead, it pushed him to the brink of elimination, 48 hours before he had to play the No. 1 player in the world.

Djokovic is not unbeatable – especially on clay. But after a slow return to form in the early spring, following the Australian Open mess, he does look to be closer to the top of his game. Contrast Nadal’s marathon fourth-round win against Djokovic, who easily disposed of a top clay player in Diego Schwartzman, 6-1, 6-3, 6-3.

Nadal will not be without some advantages here. The biggest is the crowd, which will heavily favor a Roland Garros favorite like Nadal.

At the end of the day, though, there’s a reason that the undisputed King of Clay is an underdog in this match. Djokovic is just the better player right now, which explains the -225 match price.

French Open: How to Bet Nadal vs. Djokovich

If you’re inclined to believe in fairy tale endings, Nadal at +175 could be a fun, enticing ticket to hold on Tuesday. I’ll stick to backing Djokovic, as he’s simply the player who is most likely to win this match in 2022. (The -225 price comes with an implied 69.2 percent chance of victory for Djokovic.)

If you’re looking for exotic angles to play: I would play either Djokovic -3.5 (-135) on the game spread line, or Nadal not to win more than one set at the same price. These are effective ways to bet Djokovic without having to lay as much juice.

I would also consider a smaller position on Djokovic to win 3-1 at +275.

For Nadal fans, I would strongly consider a look at Nadal +140 on the first set prop. Djokovic has a history of coming out slow, and Nadal (with the weather and the crowd) will be at his most dangerous early on in the match.