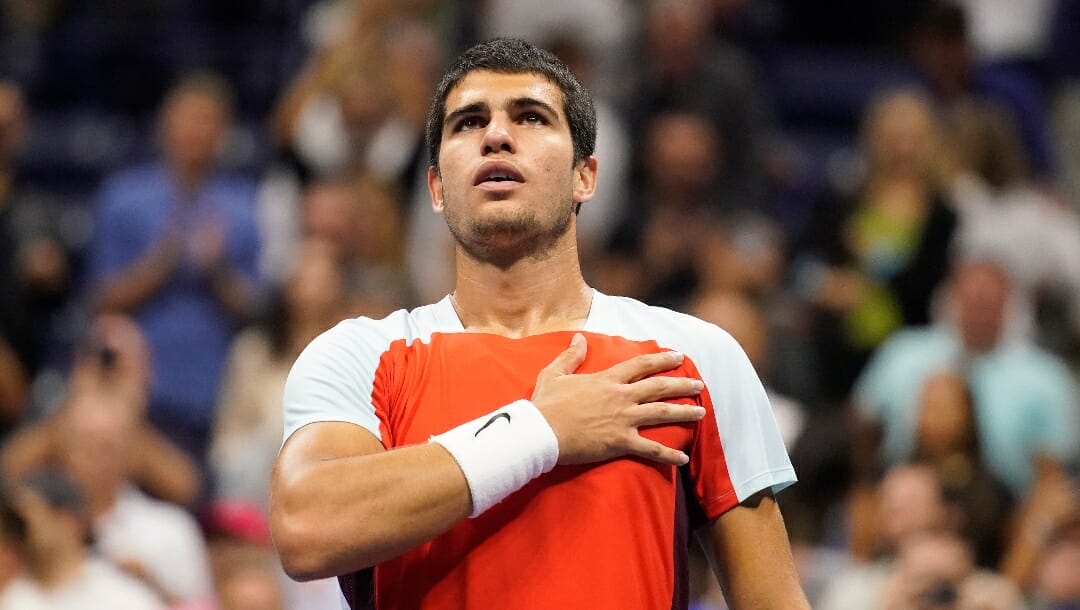 To the winner of the Carlos Alcaraz vs. Casper Ruud final goes all the spoils, as the pair battle for the US Open title and world No. 1 ranking at Flushing Meadows on Sunday.

US Open tennis odds had Alcaraz as the third favorite (+550) in the leadup to the season’s final major, while Ruud, at +5000, was a mere afterthought, considered not just as a long shot but a player with almost no chance.

The US Open final represents not only the future of men’s tennis but the present. Alcaraz has shown qualities befitting of a legend in the making, while Ruud has defied naysayers and the odds, proving he’s not a one-trick clay-court pony.

It’s an occasion both players would have thought only possible in their dreams, representing their perseverance through mounting pressure and an unsurpassed commitment to excellence.

Pushed to the brink just once in six matches, Ruud has quietly and effectively gone about his business at Flushing Meadows.

Even after dropping the fourth set to Tommy Paul in the third round, Ruud didn’t waver, keeping his composure and rhythm to shut the American out in a commanding fifth set.

That decisive period in Ruud’s path to the final was a microcosm of how he acquitted himself throughout. The 23-year-old rarely has an emotional outburst, demonstrating steadfast calmness and wisdom beyond his years.

Ruud walked all over world No. 14 Matteo Berrettini in the quarterfinal, winning in straight sets in just over two and a half hours. He then dispatched Karen Khachanov in four sets, handling the Russian’s behemoth serve with aplomb.

Ruud countered Khachanov’s rocket-like first serve by retreating from the baseline; so far, you would be forgiven for thinking he was a spectator lucky enough to source a first-row ticket.

Ruud makes split-second adjustments on the fly and uses his adaptiveness to find ways to nullify his opponents’ primary weapons. One of the tour’s most intelligent players, Ruud also has the touch of a wizard, underrated speed, and the ability to execute at pivotal moments.

He’s also the fresher of the finalists, spending eight hours and 46 minutes on the court in three previous matches. However, before the US Open started, countless questions loomed about Ruud’s inability to get it done on hardcourt and at majors.

Of his eight titles, only one has come on hardcourt. He hadn’t made it past the fourth round at the US Open or Australian Open in seven previous tries and entered the season with a mediocre 14-13 record at majors.

Since the Australian Open, where he couldn’t play due to an ankle injury, Ruud is 13-2 at majors, including a trip to the French Open final, where he lost to his mentor Rafael Nadal.

However, he had a markedly easier path to the final than Alcaraz, playing just one elite opponent, Berrettini, whom, counterintuitively, he had the easiest time with.

On the court for 13 hours and 28 minutes since the first serve against Marin Cilic on Monday, Alcaraz has repeatedly proven why throngs believe he’s a legend in the making. The current world No. 4 chases down every lost cause, making his opponents earn every point.

Alcaraz seems completely unaffected by the mounting pressure, extreme physical exertion, untold expectations, and wild momentum swings. He is a walking demonstration of what it takes to ascend to the top.

If it were anyone else, I’d say there isn’t enough time to recover to compete at a level needed to vanquish a player of Ruud’s ability. However, Alcaraz is the antithesis of normal.

Illogically, he looked fresher than Frances Tiafoe during Friday night’s five-set extravaganza. He coughed up the lead multiple times against the American, only to rebound faster than a child bouncing off a trampoline.

That perfectly sums up Alcaraz’s irrepressible will to scrap for everything, and it’s one of many attributes that will ensure he remains at the pinnacle of the sport for a long time to come.

Alcaraz won both previous head-to-head encounters against Ruud, one on hardcourt earlier this year and one on clay in 2021.

The teenage sensation’s youthful exuberance, unparalleled athleticism, and seemingly indefatigable stamina will see him win his first of many majors while claiming the crown as the world’s best.