US Open Predictions: 6 of My Best Bets from First Round 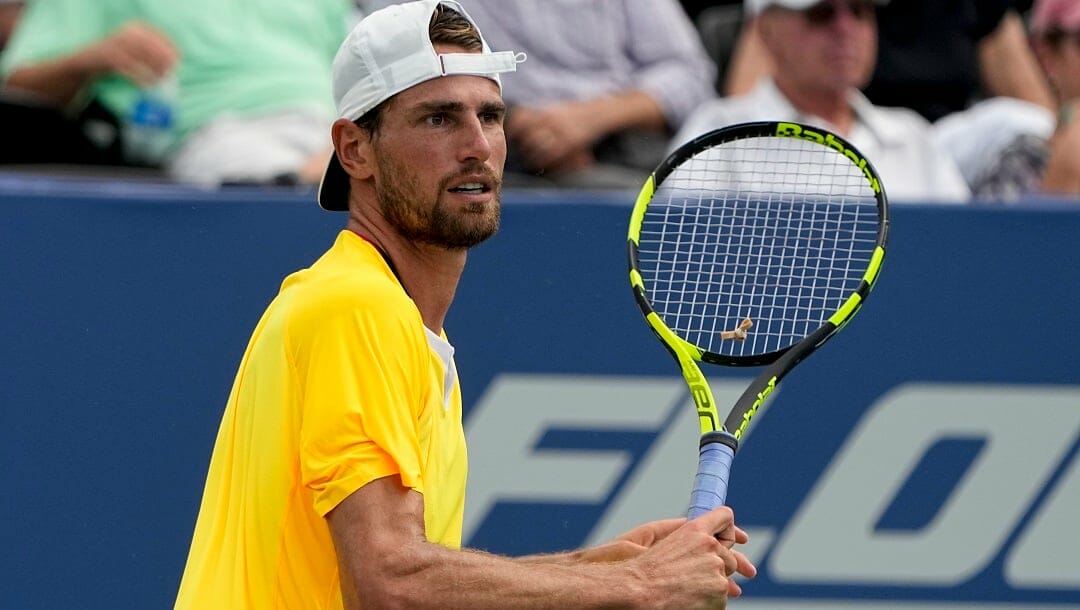 The final major tennis tournament of 2022 is here.

College football and NFL betting opportunities will be plentiful over the next two weeks. However, as any experienced tennis odds expert can tell you, it’s essential not to forget all the US Open odds available to bet throughout the week.

US Open Predictions: First Round of Major Has Strong Tennis Betting Opportunities

The main draw was finalized on Friday, August 26, when the last qualifying matches were completed.

Since then, I’ve been pouring over all the US Open odds – both men’s and women’s – to identify the best tennis betting opportunities.

Here are the six that I found.

Let’s start with a big, doughy favorite. If you are a regular reader of my tennis handicaps, you know I’m not afraid to be a little more aggressive in terms of betting favorites if I feel the market is still light, relative to what a true price should be.

Enter American player Maxime Cressy. Cressy is a good hardcourt player on the cusp of cracking the ATP top 30. He’ll be playing with an American crowd at his back.

His opponent, Hungarian player Marton Fucsovics, has lost five of six matches and is not a particularly strong hardcourt player.

Cressy is the obvious favorite here. He has everything going for him in this matchup and should cruise into the second round.

Bettors unwilling to lay the -300 price can reduce their exposure by betting Cressy on the games line at -3.5 (-155).

However, I’m happy to lay the -300 price for a reduced return in these spots. Old-school gamblers might scowl at such a move, but the reality is that Cressy should be closer to -500 in this spot. That makes his current -300 price inherently valuable.

One of my favorite strategies for long-term success in the tennis odds market is to back qualifiers who are priced as favorites. Because of market forces, the book generally only does this in cases where a qualifier’s opponent is playing really poorly.

Here, we have exactly such a case. Zhizhen Zhang is probably better known as a clay player who mostly sticks to the Challenger circuit, but he ripped through three US Open qualifying matches last week and made it to the main draw.

Now, Zhang is being rewarded with a first-round matchup against Dutch player Tim Van Rijthoven.

Get ready for this bombshell that I found while researching the match: In his professional career, Van Rijthoven has never won a main draw tour match on a hardcourt surface. Like, never. Not ever.

There are some qualifying wins, or some Challenger wins, but he’s never won a hardcourt main draw on tour. The closest you can get is a second-round win he notched at the junior Australian Open… in 2015.

There’s always a reason the book sets a qualifier as a favorite. Now, you know this one. I’m betting on Zhang as a result.

Regulars on the tennis betting circuit know that Nishioka is one of the hotter names on tour right now.

He’s 32-14 on indoor & outdoor hardcourt this season, which includes a run to the Citi Open championship round in Washington D.C. earlier this month. He also scored a top-10 win over Andrey Rublev during that tournament.

His first-round opponent, Alejandro Davidovich Fokina, has a higher ranking… and a much less effective hardcourt game. Fokina is 4-8 on hardcourt this year and hasn’t posted a winning record on the surface since 2019.

I like Nishioka to draw out plenty of long volleys against Fokina and ultimately score the nominal upset here.

This is probably the worst line of any first-round match and, thus, my best bet of the first round.

Lucia Bronzetti is playing the best tennis of her professional career, soaring to a top-60 ranking this month and a 34-19 overall match record this calendar year. She’s 19-9 on hardcourt and played in the final round at WTA Vancouver last week.

Her opponent, Lauren Davis, has lost six of her last seven matches. She hasn’t won a main draw match on hardcourt since the Miami Open, which was back in March.

Rankings are largely useless when it comes to tennis odds, but for what it’s worth, Davis has dipped outside the top 100 players on the women’s side.

The only reason I can see for Davis to be the favorite in this match is that she’s from Ohio. Since that’s a terrible reason to bet on someone – even at the US Open – I’m making Bronzetti my biggest play of the first round.

Here’s an interesting first-round match. Reigning women’s US Open champion Emma Raducanu will stare down French player Alize Cornet in the first round at Flushing Meadow.

Cornet has a bit of a reputation as a giant killer; most recently, she ended Iga Swiatek’s long winning streak and knocked her out at Wimbledon.

To add to the complexity, Raducanu hasn’t been in great form of late. Last year, her US Open championship was the crowning achievement in a hardcourt season in which she posted an 18-4 record.

This year, by contrast, she’s 6-8 without any truly impressive wins.

Normally, a reigning champion would likely be priced through the moon to ward off all the public bettors who appear for major tennis tournaments.

Here, Raducanu is just -150 at the BetMGM online sportsbook. That price tells you all that you need to know about what the book thinks of Raducanu’s play right now.

Back Cornet to add another pelt to her mantle.

This will be one of the most-watched matches of the entire first round at the US Open. Serena Williams will play Danka Kovinic in what could be the final match of her historic, storied career.

However, if you’re giving me +290 odds to beat a 40-year-old player who’s won just a single match in the last 14 months… This one is a no-brainer. It’s Kovinic or pass.

Serena is a legend, but you absolutely cannot lay four bucks on her in this spot.

I discussed these six bets and more on the Aug. 29 episode of my handicapping podcast, The Lion’s Edge. That episode also includes some great college football analysis from my guest, Phil Steele.

The Lion’s Edge podcast has intelligent, weekly insights into trends and betting tips across the online sports betting world. It’s available on iTunes, Spotify, or wherever you listen to podcasts.