Wimbledon Betting: Back Novak Djokovic & Matteo Berrettini To Meet in the Final 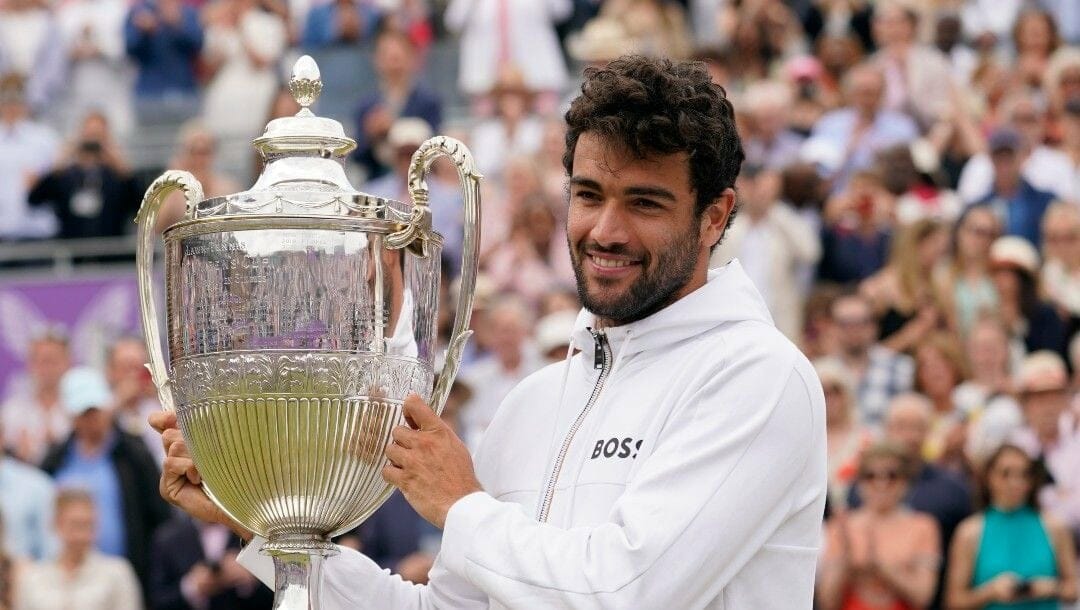 According to Wimbledon odds, Novak Djokovic and Matteo Berrettini are favorites to meet on July 10 in what would be a rematch of the 2021 final.

The Serbian and Italian are pegged as +300 favorites to advance to the final, while Wimbledon betting odds have Djokovic and Rafael Nadal as close +400 second favorites.

Odds for other finalists lengthen significantly beyond the favored two pairs, with Djokovic and Félix Auger-Aliassime coming in as +1000 third favorites.

If Djokovic and Berrettini square off on July 10, it would mark the first time the same two players meet in consecutive Wimbledon finals since Djokovic and Roger Federer in 2014 and 2015.

Djokovic got the better of Federer on both occasions, a fate that will most likely befall Berrettini if he and the world No. 3 renew hostilities on the final day of The Championships.

A lot can happen between now and then, as both players must first win six matches. Highlighting potentially problematic encounters, here’s a look at both players’ road to the final.

Novak Djokovic: -222 To Make the Final

The three-time defending champion hasn’t played since losing to Nadal in the French Open quarterfinal on June 1. He was scheduled to play exhibition games at the Hurlingham Club last week but predictably withdrew.

Djokovic slipped to No. 3 in the world rankings after a mediocre start to 2022, in which he has won just a single tournament, the ATP Masters 1000 in Rome, prior to the French Open.

The 35-year-old has a few matches to work off any lingering rust before facing his first challenge at the All England Club. Djokovic and breakout star Carlos Alcaraz are touted to meet in the quarterfinal.

If forecasts come to fruition, it would mark Alcaraz’s second Grand Slam quarterfinal appearance. He also qualified for the final eight at this season’s French Open, falling to the eventual finalist Alexander Zverev.

While Alcaraz, 19, represents the future of men’s tennis, he’s too raw and inexperienced, with only two professional grass-court matches under his belt, to upset the six-time Wimbledon champion.

The semifinal will most likely see Djokovic battle one of the following players: Casper Ruud (Nor), Cameron Norrie (GBR), Hubert Hurkacz (POL).

Potential routes to the final for our top seeds 💫#Wimbledon pic.twitter.com/Yw9ZMqURPq

Ruud enters Wimbledon having just experienced his first Grand Slam final appearance. The world No. 6, a clay-court specialist, was taught a straight-sets lesson in the final by Nadal. But, like Alcaraz, Ruud has almost no Wimbledon experience to draw from. He was ousted in the first round of his only two previous experiences at the All England Club.

Cameron Norrie, the world No. 12, is Great Britain’s best hope but doesn’t possess the experience or skill set to upend Djokovic. Norrie is playing in his fifth Wimbledon and has never made it past the third round.

World No. 10 Hurkacz would cause Djokovic the most trouble of the three. He won his warm-up tournament, the Halle Open, and advanced to last season’s Wimbledon semifinal.

The powerful Pole, towering over the net at 6-foot-5, is an imposing and formidable figure. Wimbledon odds have him placed at +1400 to win, excellent value for one of the tournament’s best sleeper picks.

Djokovic is chasing his 21st Grand Slam, which would put him just one behind Nadal. So it’s highly unlikely the heavy-hitting Hurkacz has enough to stand in his way.

Matteo Berrettini: +200 To Make the Final

Berrettini has an arguably easier route to the semifinal. After winning both of his warm-up tournaments – the Stuttgart Open and the Queen’s Club Championships – the 26-year-old Italian is sizzling hot entering Wimbledon.

Going further back, Berrettini has lost just a single grass-court match in his previous 21 matches. That defeat came against Djokovic at the final of Wimbledon 2021.

Nothing too daunting stands in Berrettini’s way prior to what would be an excellent quarterfinal against Stefanos Tsitsipas, who just won the Mallorca Open in preparation for Wimbledon.

If Berrettini, the world No. 11, gets past the quarterfinal, a highly anticipated semifinal test against Nadal might be in the offing. Given his recent injury woes, many are waiting to see how Nadal’s body – particularly his susceptible foot – holds up after the first week.

Berrettini’s hopes of making it to a second straight Wimbledon final might depend on whether Nadal’s body betrays him. If Nadal gets to the semifinal unscathed, Berrettini could fall a hurdle shy of reaching the coveted finish line.

Berrettini is 0-2 lifetime against Nadal, with one defeat coming at the 2019 US Open semifinal and the other at this year’s Australian Open, again in the semifinal. So even if Nadal is healthy, don’t count out Berrettini, who, aside from Djokovic, is unquestionably the most impressive player on grass in the men’s draw.