Bengals Offensive Line Is in More Trouble Than Ever Before 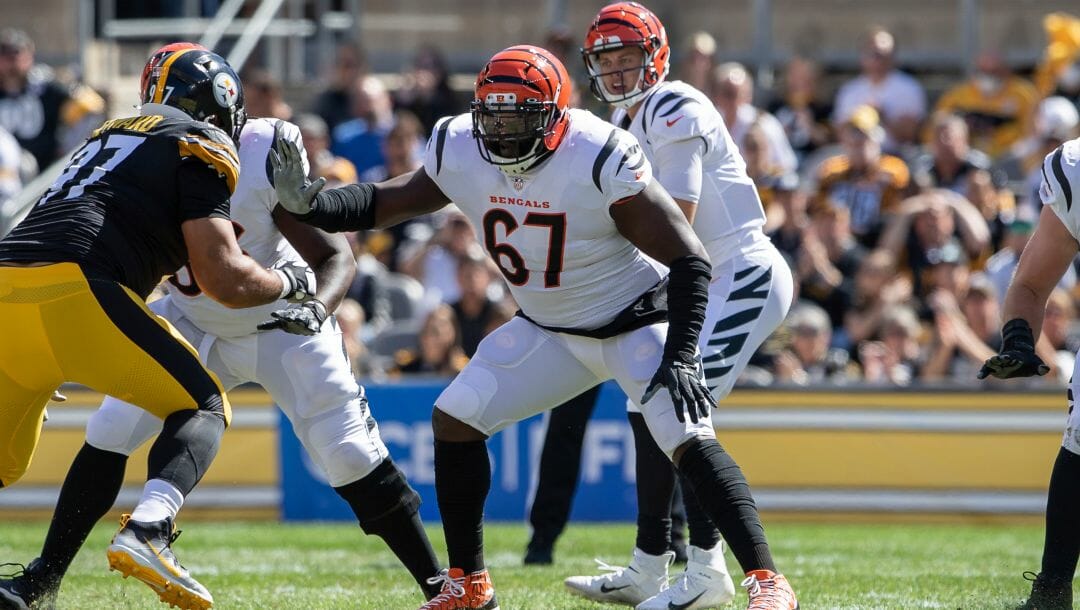 Jeffery Simmons bulldozed his way toward Joe Burrow, and the Bengals didn’t have a way to stop it.

The Titans defensive tackle took down Cincinnati’s quarterback late in an AFC Divisional playoff game. It marked Tennessee’s ninth sack of the day, which tied a postseason record. The Bengals may have moved on, as their Super Bowl odds are +165, but concerns about their offensive line remain.

The Los Angeles Rams are favored to take the Lombardi Trophy this weekend, as their Super Bowl betting line is -4.5. The Rams’ defensive front is among the best in the league, and the Bengals appear ill-equipped to slow it down.

“We definitely have had some slipups,” Bengals center Trey Hopkins said. “We’ve had some less-than-stellar performances, but at the end of the day when it’s crunch time and we need it and the game is on the line, we just all come together.”

Bengals Have Been ‘Battle- Tested’

As far as the ground game, Cincinnati’s offensive line has been average. It’s 15th in the NFL by Football Outsiders’ adjusted line yards (4.17) and is graded 20th by Pro Football Focus for run blocking.

The Bengals’ pass blocking has been even worse. According to Football Outsiders, they rank second-to-last for pass protection and adjusted sack rate (9.1%), as they’ve allowed 55 sacks. PFF grades them 25th in that area.

“We’re all accountable,” guard Quinton Spain said. “We’re all one unit so if anybody gives up a sack, we all give up a sack. But at the end of the day, to handle the Rams’ pass rush, we have to have a good game plan.”

Joe Burrow confident Bengals will rise to challenge against ferocious Rams pass rush: "I have the utmost confidence in our offensive line to make it happen"https://t.co/RinOqfm6yT pic.twitter.com/iitdfwQ9yH

The Bengals have been challenged with some of the most formidable pass rushers in the league this season.

That includes those in the AFC North alone, with the likes of TJ Watt of the Pittsburgh Steelers and Myles Garrett of the Cleveland Browns. Both were in the top three in sacks during the regular season and are in contention for the NFL’s Defensive Player of the Year.

“As a collective group, [the Rams are] dynamic and they can really get after the passer,” Bengals offensive coordinator Brian Callahan said. “But I’ve got total confidence in our guys up front. They’re battle- tested. They played in tough games, they’ve managed, they’ve made mistakes, they’ve given up sacks and they just keep coming back and fighting and that’s all you can ask for at this point in the year.

“… We may not have a line full of Pro Bowlers, but we got guys who play really hard and play well together and we’re expecting a big game from them.”

The Rams may be as tough as any test the Bengals have encountered this season.

Their pass rush is graded first by PFF. They’re also sixth in adjusted line yards (3.84) and eighth against pass protections with an adjusted sack rate of 7.6%, according to Football Outsiders.

That effort is paced by All-Pro defensive tackle Aaron Donald. He’s the highest-graded defender by PFF. He’s also second among pass rushers, which includes edge players like Garrett and Watt. He has the fourth-best Super Bowl MVP odds at +1200.

“He’s certainly one of the greatest players we’ve ever played against,” Bengals head coach Zac Taylor said. “… He’s a real problem and someone that you really have to focus on. And you spend time and energy talking about Aaron Donald, and then you’ve got these other elite players that are surrounding him as well so I think they’ve done a great job of building a team and putting pressure on opposing team offenses.”

Highest-graded defender in the regular season:

Rams linebacker Von Miller is PFF’s fourth-ranked edge rusher this season with 11.5 sacks. Taylor was at Texas A&M when Miller was thriving in the college game before he was drafted second overall. He recalled texting Rams head coach Sean McVay during the season, thankful Miller was traded from the Broncos before the Bengals played them.

He didn’t realize he would be game planning for Miller in the Super Bowl. He’s fully aware of how disruptive he can be.

Following the Titans game, Taylor credited his opponent for putting so much pressure on Burrow for a variety of reasons. Part of it was a result of their strategy up front, another was because of their secondary mixing up coverages.

Hopkins pointed to Cincinnati’s technique. A focus on fundamentals, he noted, helped the Bengals defeat the Chiefs in the AFC Championship. Spain stressed the Bengals need to work cohesively against the Rams.

“It’s on us, really,” Bengals offensive tackle Jonah Williams said. “There’s an onus on us to be really good.”