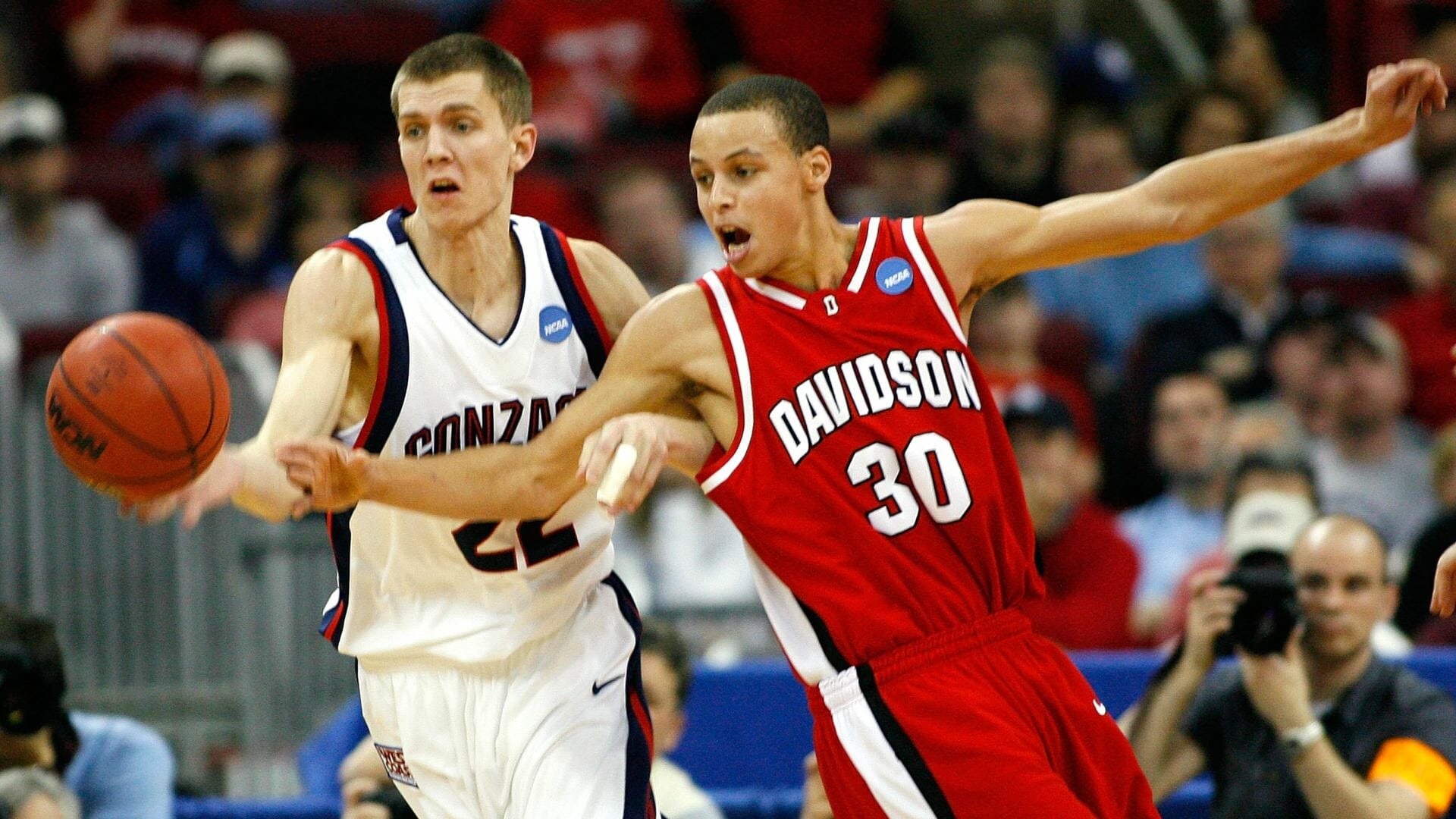 Stephen Curry made two free throws to extend Davidson’s lead to four points over UNC Greensboro with two seconds remaining on February 13, 2008. His 40th and 41st points of the game set a new career-high and clinched a win after trailing by 20 points late in the first half. The college basketball world didn’t notice.

No one noticed because it was a mid-week SoCon game that tipped as half the country was in rush hour traffic. Even after a sensational freshmen season, four previous 30-point games that season, and 20 points in a near-upset of Duke in December, no one noticed Dell Curry’s son on that Tuesday night in Greensboro. Five weeks later, Curry went for 40 again. This time, everyone noticed.

Curry scored 40 points, including 30 in the second half, of Davidson’s win over Gonzaga in the First Round of the 2008 NCAA Tournament. In the Wildcats’ first tourney win since 1969, Curry shot 8-for-10 from deep, including a go-ahead three-pointer with one minute remaining. And like five weeks earlier, the SoCon Player of the Year hit free throws in the final seconds to clinch a win.

"He's done it all year for us," Davidson senior guard Jason Richards said after the game. "This game, he showed the whole nation what he's capable of."

Curry wasn’t unknown at Davidson or in the SoCon, but he was unknown across the country. Here are other incredible March Madness performances from unknown players:

In an NCAA Tournament widely revered for the Magic Johnson vs. Larry Bird matchup in the national championship, Penn’s Final Four is largely forgotten. In the second of four wins en route to the only Final Four appearance in program history, Tony Price had 25 points, nine rebounds, and six assists against North Carolina.

Some people knew Bo Kimble for unfortunate reasons. Others didn’t know Bo Kimble at all, nor did they know Loyola Marymount was a real college.

Twelve days after Lions’ forward Hank Gathers died on the court during the WCC Tournament, Kimble led a 19-point win over New Mexico State in the First Round of the NCAA Tournament. Kimble scored 45 points, one of which was scored on a left-handed free throw to honor Gathers.

Jeff Fryer led four Loyola players who scored 20 points in a 149-115 win over Michigan to reach the second Sweet 16 in program history. The senior guard hit 11 of 15 three-pointers and scored 45 points in only 32 minutes of the highest-scoring game in NCAA Tournament history.

True freshman point guard Steve Nash came off the bench and recorded 10 points, seven rebounds, and four assists in Santa Clara’s First Round win over 2-seed Arizona. Nash had just one turnover and hit eight of 10 free throws in the three-point win.

When Gonzaga earned a 10-seed and matchup against Minnesota in the First Round of the 1999 tournament, some (i.e., two) fans might’ve remembered the Bulldogs from their tourney appearance four years earlier. Others (i.e., millions) fans didn’t know what a Gonzaga was.

And they definitely didn’t know Richie Frahm existed before his 26-point effort in a 12-point win over the Gophers.

Four years after Weber State shocked Michigan for the 10th-ever 14-over-3 upset, the Wildcats did it again, shocking North Carolina for the 13th 14-over-3 upset. The Tar Heels shot 43 percent from deep and had 13 offensive rebounds but had no answer for Harold Arceneaux. The JUCO transfer scored 36 points, including 15 points on five three-pointers in the two-point win.

In 1999, two years after a First Round loss as a freshman, Wally Szczerbiak led Miami to their first (and only) Sweet 16 appearance since the field expanded in 1985. In a one-point First Round win over Washington, Szczerbiak scored 43 of the RedHawks’ 59 points.

Jai Lewis scored 12 of his 20 points in the second half and overtime, including a tiebreaking layup with three minutes remaining in overtime, of George Mason’s Elite Eight win over UConn 15 years ago. Teammate Will Thomas played all but one minute in the two-point win, scoring 19 points (on 8-for-12) shooting while grabbing six offensive (and 12 total) rebounds.

Patrick O’Bryant was on the radar of NBA scouts long before Bradley’s Sweet 16 run in 2006, but that meant nothing to a general public watching the Braves’ sophomore big man for the first time.

O’Bryant was quiet in the First Round win over 4-seed Kansas before his coming-out party two days later in a win over Pittsburgh. He had 28 points, seven rebounds, two steals, and one block to deliver the program’s first Sweet 16 appearance in 51 years.

When Omar Samhan scored 32 points in a Second Round win over Villanova in 2010, Saint Mary’s wasn’t Saint Mary’s. They were a little-known program with spotty success in the 1980s and 1990s that played in the same conference as Gonzaga.

Like Patrick O’Bryant six years earlier, the NBA was eyeing CJ McCollum long before Lehigh earned the Patriot League’s auto-bid and a First Round mismatch with Duke in the 2012 tournament.

No one else was eyeing Lehigh’s star point guard, who scored 30 points in the five-point stunner in a de facto home game for Duke in Greensboro.

Nah, said Kyle O’Quinn. In their first-ever tournament appearance, 15-seed Norfolk State shocked the Tigers behind 26 points and 14 rebounds from their senior center.

Florida Gulf Coast is a real college, everyone learned on Selection Sunday in 2013. And Sherwood Brown is a sensational basketball player, everyone learned in the Eagles’ 10-point win over 2-seed Georgetown. Brown had 24 points and nine rebounds in the program’s first-ever tournament game.

Spike Albrecht made nine three-pointers in 31 regular-season games. He never played more than 15 minutes, attempted more than five shots, or scored more than seven points in any of those 31 games. And while Michigan’s true freshman hit a big three-pointer in their Sweet 16 win over Kansas, he entered the national championship as an irrelevant bench player.

The irrelevant bench player scored 17 points on only nine shot attempts in 28 minutes in one of the most out-of-nowhere performances in college basketball history.

North Dakota State blew an eight-point halftime lead against 5-seed Oklahoma in the First Round of the 2014 tournament and trailed the Sooners by four points with 32 seconds remaining.

Twenty seconds later, the Bisons trailed no longer after Lawrence Alexander hit a game-tying three-pointer for his 20th, 21st, and 22nd points of the game. The junior guard, who entered the game averaging 11 points per game, scored six of their 14 points in overtime to earn a five-point win.

Thomas Walkup entered the 2016 tournament averaging six free-throw attempts per game for Southland champion Stephen F. Austin. In 32 regular-season and conference tournament games, he never attempted more than 14 free throws in one game and had more games with two or fewer attempts (seven) than at least 10 attempts (five).

Walkup attempted 20 free throws against 3-seed West Virginia. He hit 19 of them on his way to 33 points and the Lumberjacks’ second-ever tourney win.

After hanging with 5-seed Purdue in the first half of their First Round game in Denver, Little Rock cratered in the second half and trailed by 13 points with three minutes, 20 seconds remaining.

That’s when Josh Hagins took over. The Trojans’ senior guard scored eight points over the final 3:20, including a game-tying three-pointer with four seconds left. He added a game-tying layup in the final seconds of overtime and four points in the final minute of the second overtime en route to a two-point win.

Jarius Lyles’ game-winner against Vermont in the America East Championship made the rounds, but UMBC’s senior guard was still an unknown before the Retrievers shocked Virginia in 2018.

At BetMGM, we have up-to-the-minute NCAA Tournament odds, lines, and tips to ensure the best college basketball betting experience. Don’t miss an opportunity for online sports betting at BetMGM.