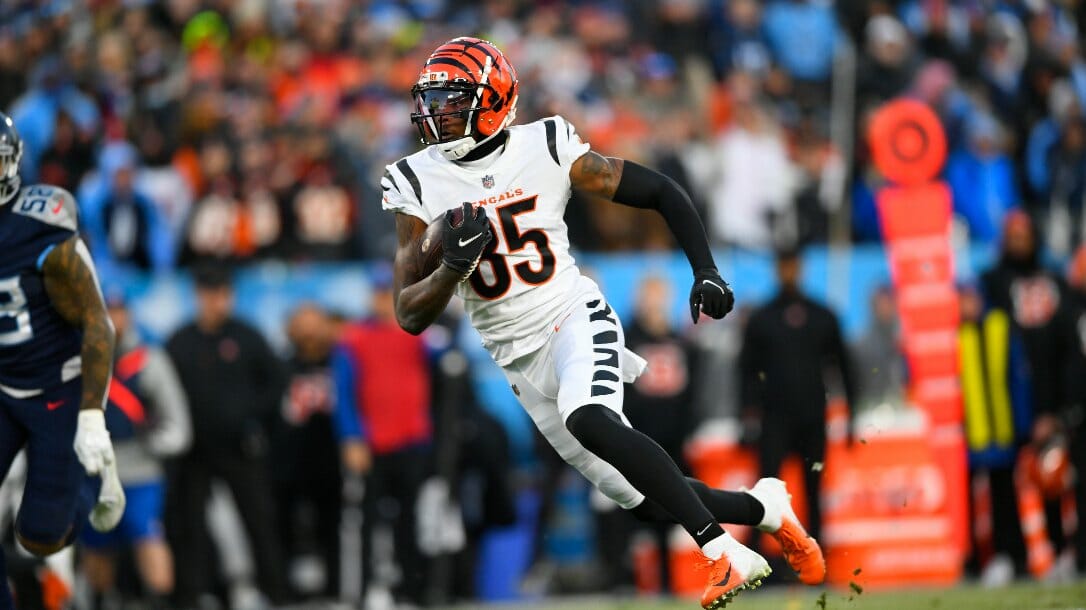 Food, commercials, halftime entertainment, football, and hitting Super Bowl prop bets: That’s a helluva Sunday right there. One of the more fun parts of the big game is the number of props one can bet on. When it comes to wide receivers making big plays, here are four of my favorite Super Bowl bets.

The Cincinnati Bengals are 4.5-point underdogs in the Super Bowl odds.

Going up against a ferocious Los Angeles Rams defensive line that helped the unit rank No. 6 against the run in the regular season, Cincinnati’s best bet to consistently move the chains is through the air.

The Bengals aren’t afraid to take their shots downfield. Joe Burrow has an NFL-high 8.9 yards per attempt.

If the subpar Cincinnati offensive line can hold up and let downfield routes develop, its standout receivers have an advantage on a Rams secondary that allowed 241.7 passing yards per game in the regular season.

One of those downfield threats is Tee Higgins, who is averaging 14.7 yards per catch. He has had at least one catch for over 24.5 yards in eight games this season, including a 44-yarder last week against the Chiefs.

As stated above, the LA secondary is gettable. The concern is if the defensive line for the Rams is so disruptive, Cincinnati may not get into any rhythm throwing the ball. But Burrow is as cool under pressure as it gets.

Even if LA gets its fair share of pressures, knockdowns, sacks, etc., Burrow and his receivers are too good not to hit on some big plays.

Ja’Marr Chase is having a special year, catching 80 passes for 1,455 yards and 13 touchdowns in the regular season. He’s added 20 catches for 279 yards and a TD in the three playoff games.

Chase had two 100-yard games against Las Vegas and Tennessee before a 54-yard receiving game last week versus the Chiefs. In a matchup where Cincinnati will need a big day in the passing game, Chase getting over 79.5 receiving yards seems probable.

Cooper Kupp is on another level this season. He now has 159 catches for 2,191 yards in 19 games, the most in NFL history when combining the regular season and postseason. But Odell Beckham Jr. remains a special, perhaps now overlooked talent.

Cincinnati’s top priority defensively is to contain Kupp. This will free up Beckham, especially if the Bengals implement bracket coverage on Kupp during key third-down situations.

Beckham had over 5.5 catches in the last two games, including a season-best nine catches for 113 yards versus the 49ers.

Kupp’s legendary regular season has parlayed into clutch postseason performances. He had catches of 20 and 44 yards in the final minute to set up Matt Gay’s game-winning field goal against Tampa Bay.

Kupp finished with nine catches for 183 yards and one TD. Last week, he caught 11 passes for 142 yards and two TDs.

It would be quite fitting for Kupp to score the final touchdown in the Super Bowl.

He’s arguably the most reliable pass-catcher in the NFL, and the Rams will look his way late either to win the game or seal it.