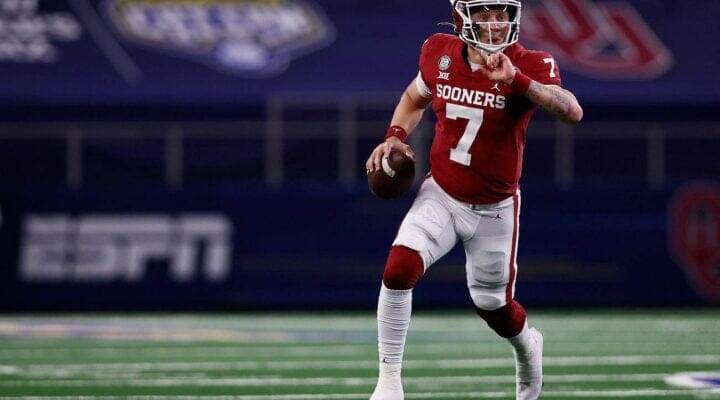 Last year’s college football offseason featured one main debate: Will they play a season or not? With full stadiums expected to be back this fall, the debates are back to normal — who is the favorite to win the national title, who has the best chance to win their conference championship, and which player will be the next Heisman Trophy winner?

As the excitement builds for the upcoming season, not only are these debates back, but college football betting odds are back as well with zero “Will the season even happen?” hesitations.

College football betting doesn’t have to wait until the games begin. You can bet on futures as well, like who the Heisman Trophy winner will be or conference championship odds.

Here are BetMGM’s odds to win the Big 12 Conference.

What to know: The Sooners have won the last six Big 12 championships dating back to 2015. They enter 2021 on an eight-game winning streak thanks, in part, to quarterback Spencer Rattler’s electric play after a shaky start in 2020. With Rattler back along with an experienced and improving defense, Oklahoma eyes another conference title and a return to the College Football Playoff after missing out last year.

What to know: New head coach Steve Sarkisian looks to get Texas all the way “back” to national relevancy. He’ll try and do so with a new starting quarterback with Sam Ehlinger now in the NFL. Three of its first four conference games are at home, including against Oklahoma. Is there potential for Texas to make an early splash?

What to know: There are reasons for excitement for Oklahoma State fans heading into the fall. The improved defense is bringing back eight starters. And quarterback Spencer Sanders had one of his better performances in a bowl game win, throwing for 305 yards and four touchdowns to close out an up-and-down sophomore season.

What to know: TCU turned it on to finish the 2020 season, winning five of its last six games. That is a reason for optimism right there, but the Horned Frogs have been a middling Big 12 team for the last few years, going 5-4, 3-6, and 4-5. With road games at Oklahoma, Oklahoma State, and Iowa State, it will be a tall task to move into the top third of the standings.

What to know: West Virginia made some small improvements in Neal Brown’s second season as head coach last year, going from 5-7 overall to 6-4, and from 3-6 to 4-4 in conference play. Another step forward should be taken this fall, with 81 percent of its production coming back.

What to know: Oklahoma has lost just three conference games in 2019 and 2020. Two of those losses were delivered by K-State. The Wildcats have done good things in Chris Klieman’s first two seasons, but they have still finished 5-4 and 4-5 in the Big 12 standings. Quarterback Skylar Thompson has decided to use his free year of eligibility to return this fall, a big boost for Kansas State.

What to know: The last team not named Oklahoma to win the Big 12 title was Baylor and TCU sharing the crown in 2014. Baylor won the championship outright in 2013. After rebuilding the program on and off the field and going 11-3 (8-1 conference) in 2019, Matt Rhule took the Carolina Panthers head coaching job. Last season, Baylor went 2-7 under first-year head coach Dave Aranda.

What to know: It’s been a tough stretch for Texas Tech. The Red Raiders haven’t had a winning record in Big 12 play since 2009.

What to know: Speaking of tough stretches, 2008 was the last time Kansas won more than one conference game in a season.

At BetMGM, you can bet college football odds throughout the year. Whether it’s college football betting lines during the season or offseason future bets like Heisman Trophy winner odds or conference champion odds, the best online sports betting experience is at BetMGM.