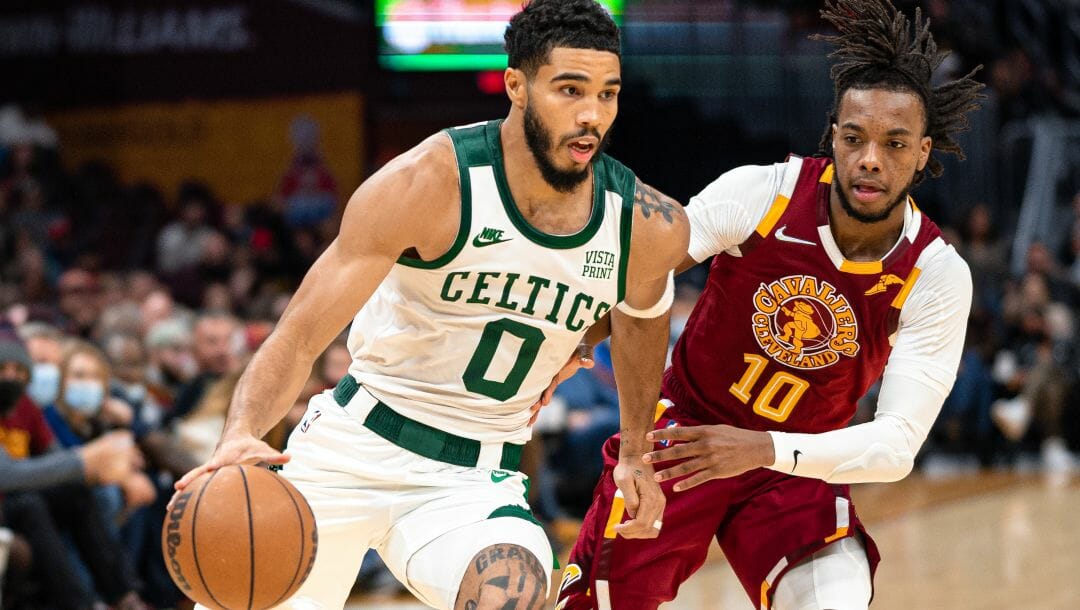 Though Jayson Tatum was double-teamed, it wasn’t going to stop him.

The Boston forward backed into Kevin Huerter. Tatum had a chance to give the Celtics, who have the seventh-best NBA championship odds at +1600, a double-digit lead with less than six minutes remaining against the Atlanta Hawks. An added advantage would help the Celtics add to their winning streak.

Tatum dribbled around the defenders and advanced into the lane. He awkwardly rose up for a floater, and all eyes went to the hoop. None were on Tatum. When the ball rolled off the rim, he rose back up and tipped it in.

Things simply appear to be going in the Celtics’ favor.

“We’re having a bit more fun, knowing how we’re going to play and how we should be playing night in and night out, and just trying to build off of that from game to game and having fun while doing it,” Tatum told reporters.

Questions if Tatum and Jaylen Brown, two All-Stars and top-three NBA Draft picks within the last six seasons, can consistently produce and win together have lingered for years.

But that hasn’t been a problem for over a month.

During this winning stretch, Tatum has led the Celtics in scoring 11 times and Brown has done so seven times. They’ve also both paced the team in rebounds and assists at different points.

Jaylen Brown hugging Jayson Tatum in #PhantomCam after Tatum's 54 helped the Celtics win for the 14th time in 16 games. pic.twitter.com/8TKYQOxHby

Tatum, in particular, has been spectacular. He’s averaged 31.6 points in his last 10 games, including a 54-point outburst against Brooklyn on Sunday.

Tatum, after the Celtics defeated the Nets on Feb. 24, relished in knowing other players were more involved offensively as well.

“Everybody’s getting opportunities, and it shows how much tougher we are to guard when we play that way,” he said.

Jayson Tatum vs. Ja Morant in the 4th quarter pic.twitter.com/r2RWVxvhNR

But the Celtics have coalesced, and it hasn’t been a problem recently. Since Jan. 29, eight of their wins have been by 10 points or less.

Jaylen Brown on the Celtics offense: "This man to the left was unstoppable, that helps your offense… all season we're just trying to make the right plays, learn and grow" pic.twitter.com/H3q65QMddO

The Celtics’ defense has been another reason for their recent success.

Celtics center Robert Williams III, in a loss to the Pacers on Feb. 27, noted his team went on its win streak in the first place because they were sound on defense. They played with physicality, helped each other, and rotated effectively.

“Just man up defensively,” Williams, who has the fourth-best NBA betting odds to win Defensive Player of the Year at +1200, said. “We’ve got guys that can step up and got guys the whole team believes in.”

Williams added missed shots can take their toll on players mentally. But an important aspect the Celtics have improved, he said, is not letting their offensive performance affect the other end of the floor.

That could be translated for the season as a whole.

They haven’t allowed the losses to impact them for too long.