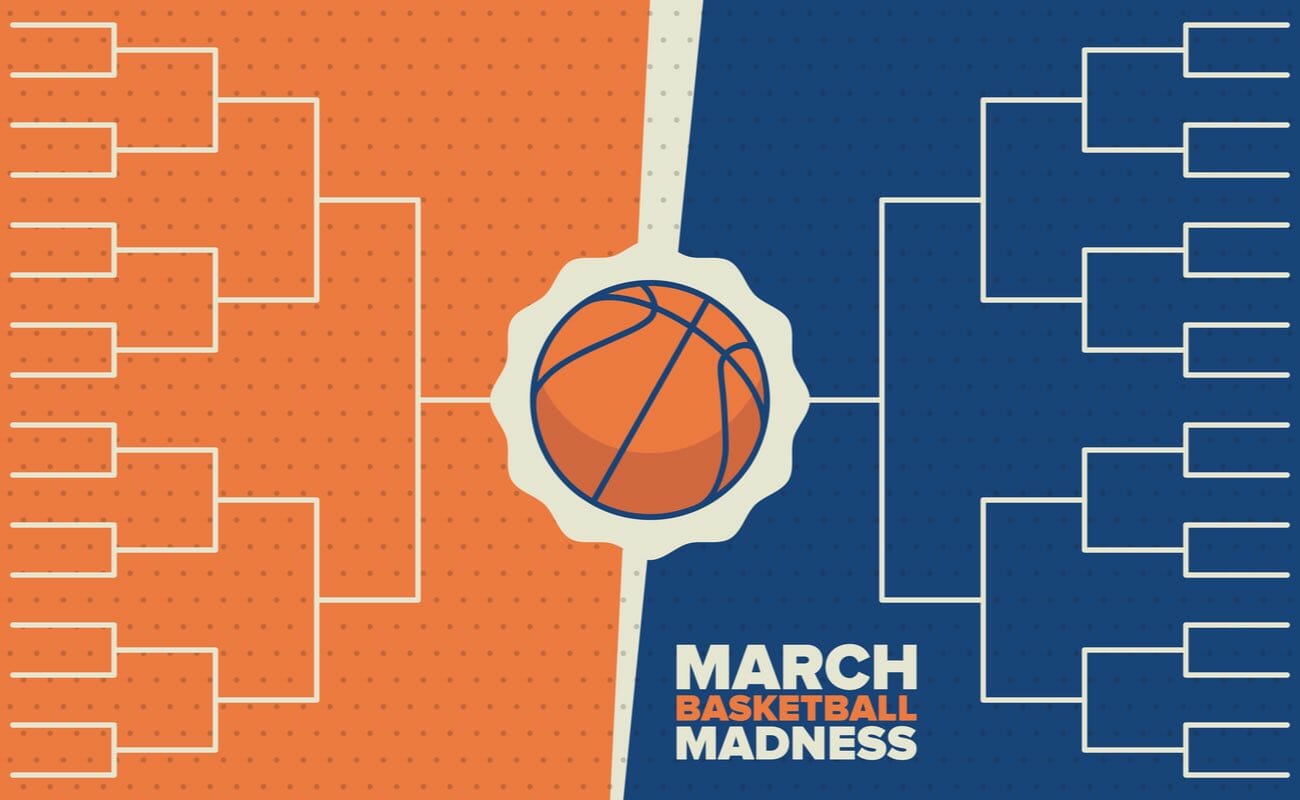 Betting on the March Division I men’s college basketball tournament is one of the most exciting and entertaining ways to enjoy a sports event. Make your picks for the different rounds of the tournament and then watch as your points rack up across the board as your predictions play out along with the best college basketball games of the year.

Firstly, you should find a bracket pool that you enjoy, whether it is one of your friends who runs it, an office pool with your colleagues, or one that you have found online where the money and the stakes might be a bit higher. Then you fill out your bracket from the 68 teams that have qualified for the tournament, and make your predictions based on your knowledge of the teams, the game and the tournament, all the while hoping for that perfect bracket (which has still never been done).

Here we find out a bit more about how the tournament works, how to fill in your bracket and a few tips and tricks for how to pick winners out of the field of 68, as well as some of the different ways that brackets are scored. We also offer some ideas on how to start your own bracket for you and your friends, with your own unique scoring system that works for you.

How Does the Tournament Work?

The Division I men’s college basketball tournament is held annually in March and is a single-elimination style tournament that has a field of 68 teams from schools that take part in the 32 conferences across the country. This tournament gives smaller schools the opportunity to compete against some of the legendary powerhouse teams in college basketball such as the Duke Blue Devils, UNC Tar Heels, Kentucky Wildcats and the Kansas Jayhawks. There are two ways in which a team can enter the tournament – through either an automatic bid or an at-large bid.

In the postseason, each conference hosts its own tournament, the winning team from each of these conference tournaments earns themselves an automatic bid, or automatic invitation, to participate in the tournament in March. The Ivy League Conference awards its conference championship, and the automatic bid, to the team that places in the top rank of their regular season. The at-large bid, however, works quite differently. With only 32 of the 68 teams able to receive an automatic bid to the Division I basketball tournament, there are still 36 teams to field. There is an official selection committee that decides which teams, that did not receive an automatic bid, have a resume that merits an invitation to the tournament. There are some conferences that have more than just 1 team that deserves a shot at the national championship title, like the Big 10, Atlantic Coast Conference, Pacific 12 and the Big East Conference.

How Does the Seeding and Brackets Work?

Once the teams are selected and the full field of 68 has been finalized, the teams need to be seeded and divided up into four regions. The teams are split into either the North, East, West, or Midwest regions and are then seeded from 1-16 within their region, to get an initial ranking based on stats leading up to the tournament, the quality of the teams, and which teams are expected to win when compared to the other teams in their region. Each region has an extra game before the tournament starts, which will leave four teams after those games are completed, to get the total up from 64 to the full field of 68 teams.

Once the seeding is done, and teams are ranked within their regions, each team’s geography is then decided – this determines where each team will be playing its games. Having a higher seed is a useful perk in this case because higher-seeded teams are given preference with regards to travel and will spend more time locally than lower seeded teams who will have to travel further and more often to their games – sometimes across the entire country for a single game on the day. This has the added bonus of home crowds for higher-seeded teams, which can make a big difference as some teams perform better at home or on the road.

Another way in which having a higher seed in the tournament is rewarded is in the structure of the games in the first round. When creating the first-round matchups, the team that has the No. 1 seed in their region will play against the team that has the No. 16 seed in their region, and the No. 2 seed will play against the No. 15 seed and so on, until the matchups are all decided. This means that, on paper, the first round for the higher seeded teams will be much easier for them, as they are playing against the “worst” teams in their region, whereas the lowest-ranked teams are playing the best teams in the region. This fills out the initial round of the bracket, and once the bracket is filled the bracket pools open, and fans can begin filling in their predictions on the outcomes of all the games all the way down to the championship game – which decides the winner of the national championship title.

When you are deciding which bracket pool you want to enter, it is important to know how the bracket you have chosen is scored. There are some standard scoring methods that are widely used by most bracket pools, but people tend to have a preference as to how they like to score their brackets. Finding a bracket that uses a scoring method that you enjoy is important to enjoying the competition and playing the bracket out with your pool.

First off, there is the simplest scoring method used which awards 1 point for each correct game prediction – this method doesn’t take other factors into consideration, such as the tournament round. This scoring method is not a commonly used one because it doesn’t reward the players in the pool for picking correctly in the later rounds of the tournament. Picking the winner between the No. 1 and No. 16 seed is much easier than picking the winner of the championship game, and having the correct teams in your bracket for that game is far more unlikely because you would have had to consistently pick those teams to win in each of their rounds.

The most commonly used scoring method rewards 1 point for a correct pick in the first round, 2 for correct picks in the second round, 4 points in the third round, and the points awarded for correct picks will continue to double for each round. This method does reward players who picked the correct teams, and that made accurate predictions, in later rounds of the tournament. Picking a team to advance far in the tournament is not easy, so adequately rewarding the players makes it much more fun for them. With this scoring method picking the correct national champion earns a whopping 32 points for your bracket.

Another common scoring method is to include bonus points for certain picks and predictions throughout the tournament. Extra points can be awarded for correctly predicting upsets, for example, like when a 16 seed team unexpectedly beats the No. 1 seed team in the first round (which has never happened, in case you were thinking of getting a bit risky with your bracket). As this is incredibly unlikely, and risky for that person’s bracket to have eliminated a strong team so early, awarding bonus points here gives players incentive to make wilder and more risky picks. Awarding bonus points in your bracket pool can completely change the way that people fill in their brackets, as they might decide to play for points in one region by predicting some upsets and picking a low seed team to have a Cinderella run into the later stages.

In the end, it is important that you take note of the scoring method of your bracket pool when you are choosing it. Also, keep in mind that Warren Buffet is offering a $1 billion reward for the perfect bracket, so consider your picks very carefully, and good luck!

If you are excited to join a bracket pool and make the tournament even more exciting, then why not come and join us at BetMGM? We give you access to sports betting on all the biggest and best sports events of the year, including the March Division I men’s basketball tournament. Who knows, you could be the one to accurately predict the perfect bracket and walk away with Warren Buffets billion dollars, on top of bragging rights in your pool.