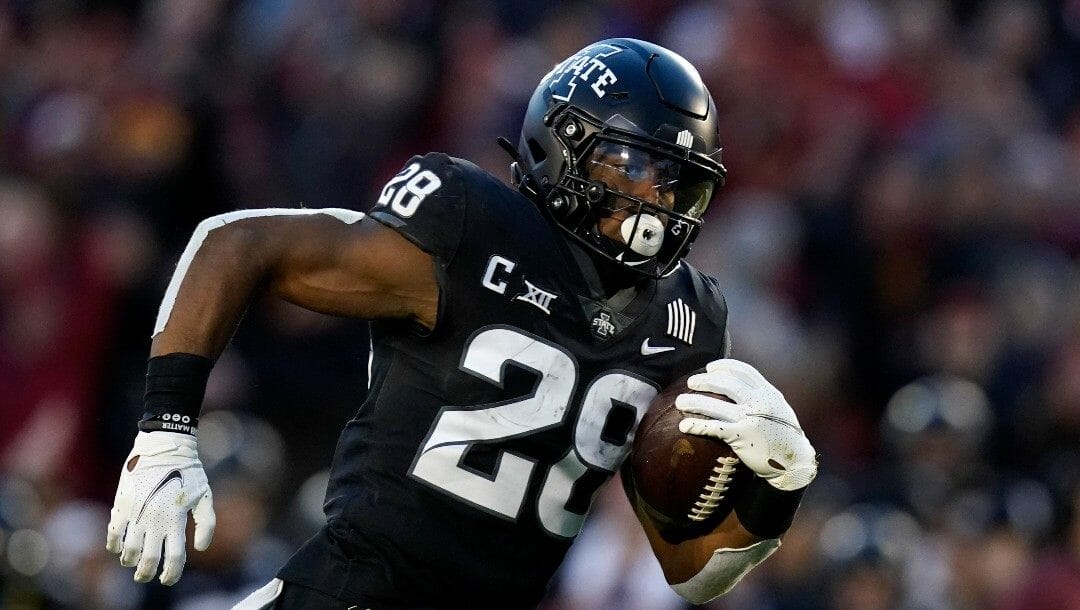 Breece Hall is more than a marvelous runner.

The Iowa State running back, who’s arguably the best at his position in this year’s NFL Draft, lined up next to quarterback Brock Purdy in the shotgun in a game against West Virginia in 2020. And he showcased everything he’s capable of.

First, when the Mountaineers’ defensive end beat the Cyclones’ right tackle around the edge, Hall blocked him by himself. Then when the offensive lineman recovered, Hall leaked out into the flat.

Purdy, scrambling, found Hall three yards beyond the line of scrimmage. Hall dragged in the throw while pedaling backward.

From there, he had the speed for an easy path to the end zone. Whether he’s juking out defenders or catching passes, when the ball was in Hall’s hands, he commonly found the end zone.

Michigan defensive end Aidan Hutchinson has the leading NFL Draft betting odds to be picked first at -250 as of April 5.

The Buffalo Bills have impressive talent at every position group, and a running back like Hall would round out their offense. They could take him with the 25th overall pick.

Devin Singletary was Buffalo’s leading rusher last season with just 870 yards and seven touchdowns on 188 carries – an average of 4.6 yards per attempt. Quarterback Josh Allen was next with 763 yards and six touchdowns on 122 rushes.

Acquiring Hall would be a luxury.

The Bills were ninth by Football Outsiders’ rushing DVOA measurement in 2021. A question remains, though, whether any team deems a running back worthy of being taken in the first round.

However, Hall is a dynamic offensive threat. He would bring much more than rushing ability, as he would elevate the Bills on that side of the ball with his contributions in the passing game.

Hall ended his career either owning or being tied for 11 Iowa State records, including 56 career touchdowns which is fourth all-time in the Big 12. He rushed for a touchdown in 24 consecutive games, setting an NCAA milestone.

He’s the ninth Cyclone to reach 1,000 rushing yards multiple times. He tied his own school record for touchdowns with 23 last season, which was second in the nation.

Hall went off for 1,472 yards, fifth all-time at ISU, as a junior. He added 302 yards and three touchdowns on 36 receptions, second all-time for Cyclones running backs. As a sophomore in 2020, he led the country with 1,572 rushing yards, third all-time at his program.

Hall is second in school history with 3,941 rushing yards, as well as third with 4,675 all-purpose yards and 82 running back receptions. And despite touching the ball 800 times, he fumbled on just three occasions.

No matter the scheme, Hall excels at finding gaps in defensive fronts.

He possesses Le’Veon Bell-like vision and patience, as he usually thinks one step ahead and manipulates defenders to move out of place with even minute movements.

As proven by his touchdown numbers, Hall is efficient in the red zone. He capitalizes on those chances by using a combo of power and quickness to find a fracture up front and plow forward.

He also has a standout spin move, as he could vanish out of a defender’s clutches in an instant with it. He also used stiff arms and jukes to break tackles. According to PFF, he had a 31% career avoided tackles per attempt rate.

In 2020 at TCU, Hall waited to go full speed until a tight end’s block was established. A few yards downfield, he again read a block by an offensive lineman and found a gap to the outside. When he hit that, he was out in the open field.

At the NFL Combine, he was first in his position group with a 40-inch vertical and ran the 40-yard dash in 4.39 seconds, just 0.02 behind the leader. His broad jump of 10 feet, 6 inches, was tied for third, 2 inches from equaling first.

However, his burst when he is in the open field isn’t his best trait. He can be caught in a race downfield.

Hall’s complete game makes him stand out, though. He’s a remarkable route runner with excellent hands.

At Oklahoma in 2021, Hall first blocked for Purdy, then cut to the left in the flat. He subsequently outran defensive back Kendall Dennis upfield.

Purdy found Hall and threw his way. As the running back was falling forward, and despite pressure from Dennis, he corralled the pass in with one hand.

As a ball carrier, a pass-catcher, and a blocker, Hall has a resume worthy of being drafted in the first round.