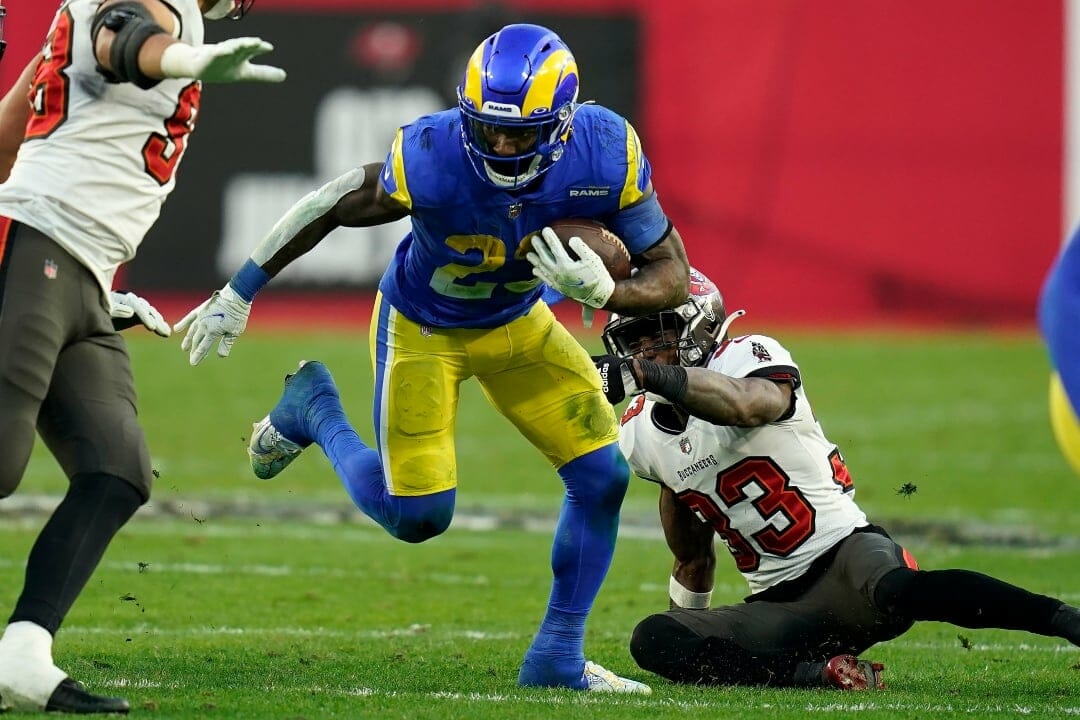 There’s going to be a lot of attention on Cam Akers and Sony Michel during Super Bowl LVI. The Los Angeles Rams are currently -4.5-point favorites to beat the Cincinnati Bengals, and if I know anything about Rams coach Sean McVay, he’ll want to build his game plan around his dynamic ground game.

Sony Michel has longshot Super Bowl MVP odds at +6600. Cam Akers is a more sensible choice at +3000. But if you’re looking for something a little less dramatic, I’ve got just the pair of props for you. Here are a couple of my favorite Super Bowl prop bets from BetMGM online sportsbook.

For a guy who hasn’t scored a touchdown since the 2020 season, Akers’s touchdown odds are noticeably conservative. A smart handicapper would ask themselves why the pricing around Akers is the way it is.

The most likely answer is that Akers is the obvious choice to be the primary engine behind the Rams’ offense in this game. Cincinnati lost DT Larry Ogunjobi for the season during its Wild Card win over the Raiders, and their run defense has suffered in a major way ever since. The Bengals had a top-10 run defense during the regular season, but they gave up at least five yards per rush in all three AFC playoff games.

Against Sean McVay’s offense, that is a fatal flaw that I heavily expect to be exploited.

The raw yardage prop for Akers (62.5) might be the more popular choice, but it’s also overpriced – especially on an offense with a lot of mouths to feed.

So instead of chasing Akers’ stats, I’m going to load up on touchdown positions, expecting McVay to feed his primary option in the red zone. The +115 Any Time Touchdown feels like a gift; it’s the First Touchdown or Multi-Touchdown props that are really the payoffs that I’m reaching for here. NFL parlays and Round Robins are absolutely the move here to maximize your potential ROI.

I cannot emphasize enough how much I think this game is going to be a steady diet of Rams RBs. And if you are a regular viewer like me, you know that means there will be some possessions – particularly in the second half – where McVay opts to give Akers a breather and let Michel have a possession or two.

Let’s be clear-eyed about what we’re betting on here, because Michel is not a guy who is heavily featured in this offense. He’s a guy that’s averaged 12 touches a game over the last five contests, meaning he is a role player and change-of-pace back. There is a very good reason his touchdown odds are so much higher than the Akers odds. Caveat Emptor and all that.

With that said, I’m envisioning a game script where the Rams are in position to burn some clock in the second half. And in that circumstance, I think they’re likely to give Michel some touches. This prop is a bet that a late drive like this occurs and finds the end zone.

One additional beneficial factor: it’s also a hedge against Akers having a touchdown vulture by Michel.

For similar reasons, I’d also take a look at the over for Michel’s rushing prop. Just as Akers is being overpriced, I think Michel is likely to be underpriced for the same reason. These second-half change-of-pace drives could be enough to get him over the number.

As was the case with Akers, NFL parlays and Round Robins should be in play here.