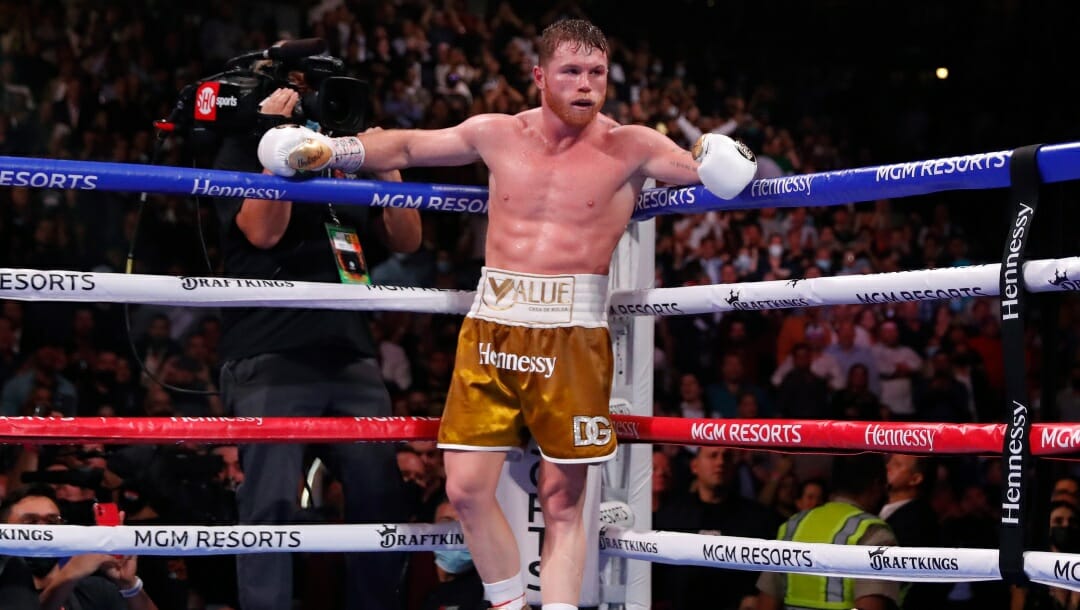 Mexico’s boxing superstar will once again headline the online boxing betting lines this weekend when he moves up to the light heavyweight division and challenges undefeated champion Dmitry Bivol for his WBA title inside the T-Mobile Arena in Las Vegas.

Although the defending champion has a perfect professional record of 19 wins (with 11 TKO/KOs) and no defeats, Alvarez is still the heavy favorite in the boxing odds at -400 (as of May 2).

His boxing credentials and accolades are the main reason he’s such a huge favorite.

Here’s an overview of his fighting career so far.

Canelo Alvarez’s next fight is against Dmitry Bivol on Saturday, May 7, inside the T-Mobile Arena in Las Vegas, Nevada.

Canelo’s full real name is Santos Saul Alvarez Barragan. He is the youngest among eight siblings born and raised in Mexico. Because of the influence of his older brothers, who competed in professional boxing, Canelo got involved in the sport at the age of 13.

Despite picking up the sport late (most boxers start at a younger age), Alvarez has utilized his natural athleticism and talent to become a two-time Junior Mexican National Championship medalist.

Due to his pure dominance and the fear instilled in other competitors in the amateur ranks, he immediately shifted to the professional class at 15 after accumulating a record of 44 wins and two losses.

In October 2005, Canelo Alvarez officially made his professional debut against Abraham Gonzalez in the 140-pound division as he scored a fourth-round TKO stoppage. After that victory over Gonzalez in his maiden match, Alvarez went on a 17-win unbeaten run (16 wins and one draw) in under three years to earn his crack at a title.

Following that triumph against Trout, Alvarez suffered his lone defeat to Floyd Mayweather Jr. in September 2013. The latter enrolled the young rising star into a boxing masterclass and handed him the defeat via majority decision. That setback has prompted Alvarez to move up in the middleweight division.

Wins over Alfredo Angulo (10th round TKO), Erislandy Lara (split decision), and James Kirkland (third-round KO) have set up the Guadalajara, Mexico native in another mega-fight, this time against Puerto Rico’s Miguel Cotto. The two battled it out for the vacant WBC World Middleweight Title and the WBC Diamond Middleweight Title as Alvarez came out on top with a lopsided unanimous decision nod from the judges.

Two fights later, after winning the middleweight crown, the 31-year-old moved down in the super welterweight division to snatch the WBO title from Liam Smith through a devastating ninth-round finish in their September 2016 clash.

Thanks to his undeniable star power, Alvarez secured the biggest fight of his career by fighting the undisputed middleweight titleist Gennadiy Golovkin in September 2017 for the right to be called the king of the 160-pound division. The fight ended in a very controversial split draw, and Golovkin retained his belts.

Its immediate rematch was pushed back from the original date because of the Mexican’s suspension due to a failed drug test. The highly-anticipated second meeting between the two fighters finally materialized in September 2018, and Alvarez made sure to capture the world titles from his Kazakh rival via majority decision.

Alvarez’s latest victory came at the expense of Caleb Plant, whom he planted to the canvas in the 11th round of their November 2021 clash to claim the IBF Super Middleweight Title and unify all the championships in the 167-pound weight class.

Canelo is king of the super middleweight division 👑

Alvarez knocks out Caleb Plant in the 11th round to become undisputed champion. pic.twitter.com/t65wTfEKMm

Mexico’s biggest boxing star will venture into another division as he challenges the undefeated WBA Super World Light Heavyweight Champion Dmitry Bivol’s in the biggest test of his career so far. Alvarez will bring immense power and speed into the fight, which thus far has earned him a 65% stoppage rate.

His signature counterpunching ability and explosive body shots should also be on display when he meets the champion across the ring this weekend in front of the packed T-Mobile Arena in Las Vegas.

A win for Canelo Alvarez would stir up a third bout with rival Gennadiy Golovkin later this year, but first, he needs to secure the victory against equally hard-hitting Bivol.

Where to Watch Canelo Alvarez’s fight

You can watch Canelo Alvarez’s fight when you subscribe to DAZN and sign up here. DAZN subscribers can stream the fight on multiple devices, including mobile devices, TVs, and gaming consoles.