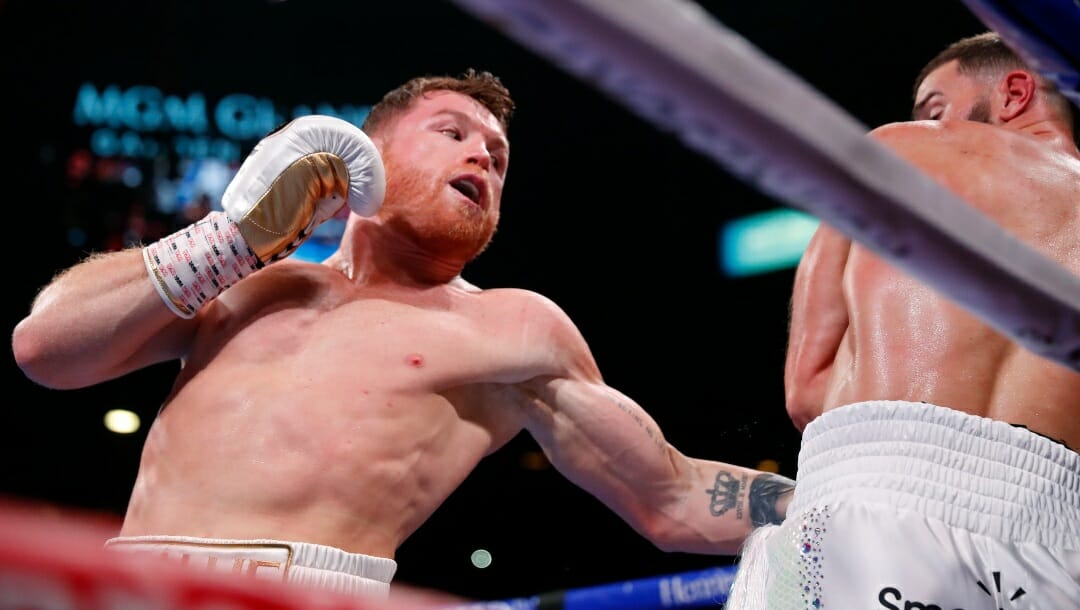 The path to greatness for Canelo Alvarez continues this Saturday as he challenges WBA Super Light Heavyweight Champion Dmitry Bivol for his title in what could be another busy online boxing betting weekend for fans.

This will only be Alvarez’s second bout in the light heavyweight division, but he is the heavy favorite in the boxing odds (-450 as of May 5) to triumph over the undefeated champion Bivol. The Mexican superstar had a previously successful stint in the 175-pound division when he stopped Sergey Kovalev in the 11th round of their WBO World Light Heavyweight Title match in November 2019.

Since that lopsided win over Kovalev, Alvarez returned to the super middleweight division to collect all the belts and earn his position as the undisputed king of the division by beating Callum Smith (unanimous decision), Avni Yildrim (third-round stoppage), Billy Joe Saunders (eighth-round stoppage) and Caleb Plant (11th round TKO).

#CaneloBivol is live on DAZN PPV in the US this Saturday.

Here’s how to buy 👇 pic.twitter.com/UNQUi6OhyR

The 31-year-old challenger also has a win and a draw over Kazakhstan icon Gennadiy Golovkin from their two mega fights in August 2017 and August 2018. Their first meeting ended in a controversial split draw where one judge scored the bout even (114-144), and the other two were split in each other’s favor.

However, in the rematch, Alvarez won the majority decision after two judges placed him over Golovkin. It’s rumored there will be a third installment of the rivalry if Alvarez makes it past Bivol this Saturday, especially since Triple G won his latest fight against Ryota Murata last April.

On the other hand, the defending champion Dmitry Bivol will be facing his eighth world title defense after a string of seven successive victories of fending off challengers. He won the title in May 2016 over Felix Valera to earn the interim title.

That interim title was eventually promoted to the ‘regular’ WBA Super Light Heavyweight Title in 2017. The Kyrgyzstan boxer’s most prominent win in his career was against Joe Smith Jr., whom he dominated in their title showdown in March 2019.

Bivol’s latest victim on his hit list was Umar Salamov, whom he scored another lopsided victory last December 2021 to maintain his record in immaculate number. He now has an overall record of 19 wins (11 TKO/KOs) with no defeat.

The oddsmakers have put Canelo Alvarez as the heavy favorite coming into the fight because of two main factors. One, he is a much bigger name, and two, his fighting style favors him. His speed will be visibly apparent during the match, which can cause a hard time for the champion.

Aside from his speed advantage, Alvarez also can counterpunch and land a hard blow to the body, which made him a top-tier finisher at a 65% rate. The Mexican pound-for-pound king will still carry the same power from the super middleweight division where he currently reigns supreme.

As for the Kyrgyz champion, he brings his finishing percentage of 58% on top of the immaculate record of 19 wins. Bivol has an effective one-two punch combination which made him successful in his seven title defenses. Expect him to utilize his two-inch reach advantage fully and a four-inch height slight edge over Alvarez to keep him at bay during the fight.

But despite how technical Bivol fights, his style is a match made in heaven for Alvarez because once the former throws that one-two combination, the latter is always ready to counter it immediately. Additionally, Alvarez loves to target his opponent’s body with vicious punches, so it is a sound fight plan for him to explore.

Add the speed difference among them, and we will likely see a boxing clinic for Alvarez on his way to collecting another title under his name.

With all this in mind, my prediction is a fifth-round TKO stoppage for Canelo Alvarez, the perfect build-up for his trilogy fight with Gennadiy Golovkin.

Where to Watch Canelo Alvarez vs. Dmitry Bivol

You can watch the Canelo Alvarez vs. Dmitry Bivol fight when you subscribe to DAZN and sign up here. DAZN subscribers can stream the fight on multiple devices, including mobile devices, TVs, and gaming consoles.