Chiefs Defense Will Be X Factor Against Bengals 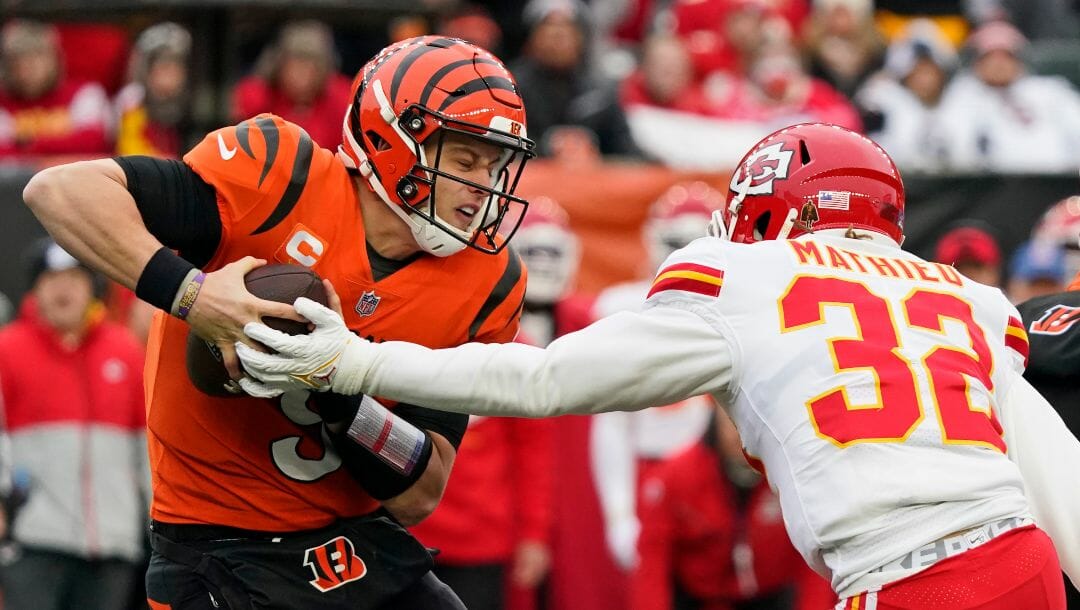 Steve Spagnuolo was forthright. The Kansas City defensive coordinator didn’t feel his unit performed as it needed to.

The Chiefs, who have +120 odds to win Super Bowl 56, surrendered two touchdowns in the final two minutes in the Divisional Round a week ago against the Buffalo Bills. They’re seeking to rectify that in their next postseason performance.

Kansas City’s defense may decide the outcome of Sunday’s AFC Championship against the Cincinnati Bengals. The Chiefs’ NFL odds are -7.5.

They may turn in a performance reminiscent of standout stretches of the regular season. Or they may succumb to the pressure, as they did against Cincinnati. They gave up 34 points, including a crushing field goal in the final seconds.

Whichever way, the Chiefs’ defensive performance will be a key indicator in the final outcome.

“They had the upper hand on that day,” Spagnuolo said. “Somehow, someway we’ve got to find a way to make a play and I think all of our guys feel that way. We do what we do. We are what we are.”

The Last Matchup With the Bengals

Kansas City’s defense is 24th in the NFL by Football Outsiders’ total DVOA measurement. And this was following a dramatic turnaround.

The Chiefs’ first five defensive outings were below the league median, according to grades by Pro Football Focus. They later enjoyed a six-game stretch above that mark, but three of their last four have been back below it.

“I learned that they outplayed us. It came to a critical situation at the end,” Kansas City defensive tackle Chris Jones, who had two sacks in that game, said. “It’s going to be a battle. That’s what I know for sure.”

In that contest, Joe Burrow threw for 446 yards on 30-of-39 passing and four touchdowns with no interceptions. Spagnuolo said Burrow, who has Super Bowl MVP odds of +1000, is “(Tom) Brady-like.”

The Chiefs were also undisciplined. When the Bengals drove down to the 1-yard line with the game tied, back-to-back Kansas City penalties on fourth-down plays allowed them to run the clock out and kick the game-winning field goal.

“I hope the outcome of this one is a lot better,” Spagnuolo said. “We know the challenge that we have. We know this offense is very productive with a lot of weapons, just like the one we just got done playing. We’ve just got to find a way to be better than we were a week ago and better than we were when we played them last time.”

Bengals wideout Tyler Boyd anticipates the Chiefs will play with a similar style this time. Spagnuolo echoed that sentiment. He said the Chiefs “can’t venture too far from who you are and what you do” at this point in the season.

Spagnuolo realized the damage Chase did in that last game. But he also emphasized that the Bengals have a wealth of talent at receiver, so focusing on one may not be the best choice.

“It’s not like they have one weapon, commit two people to it and you’re home free,” Spagnuolo said. “They’re all capable of what we call wrecking the game.”

The Chiefs are 5-0 in rematches this season, showing their knack for bouncing back. Jones feels that’s a product of their preparation and learning from their mistakes. There were plenty the last time out against the Bengals.

The Chiefs could bring the same blend of calls on defense they did previously. Taylor pointed out they excel in mixing up their pass coverages, as they’re ninth according to PFF in that aspect.

Kansas City also often spices up its pressures. The Chiefs hurry quarterbacks 13% of the time, third in the league, and blitz 28% of the time, which is eighth.

“They’re a very explosive, high-powered offense just like us,” Boyd said. “So it’s going to come down to the defensive matchups, and they threw everything at us the first game, all types of different coverages.”

Burrow added the Chiefs will blitz and attempt to make him uncomfortable in the pocket, especially if the Bengals fall behind like they did previously. Burrow was hit 10 times and sacked four.

The Bengals trailed 21-7 early and still managed to outscore Kansas City 17-3 in the second half. But Cincinnati hopes to not have to catch up with a Chiefs offense led by star quarterback Patrick Mahomes.

After their regular-season matchup, Burrow told Mahomes he had a great amount of respect for him. Mahomes responded, “See y’all in the playoffs.”

Kansas City is a perennial obstacle for the AFC Championship. If Burrow and the Bengals want to advance, that’ll have to start with dissecting the Chiefs’ defense.