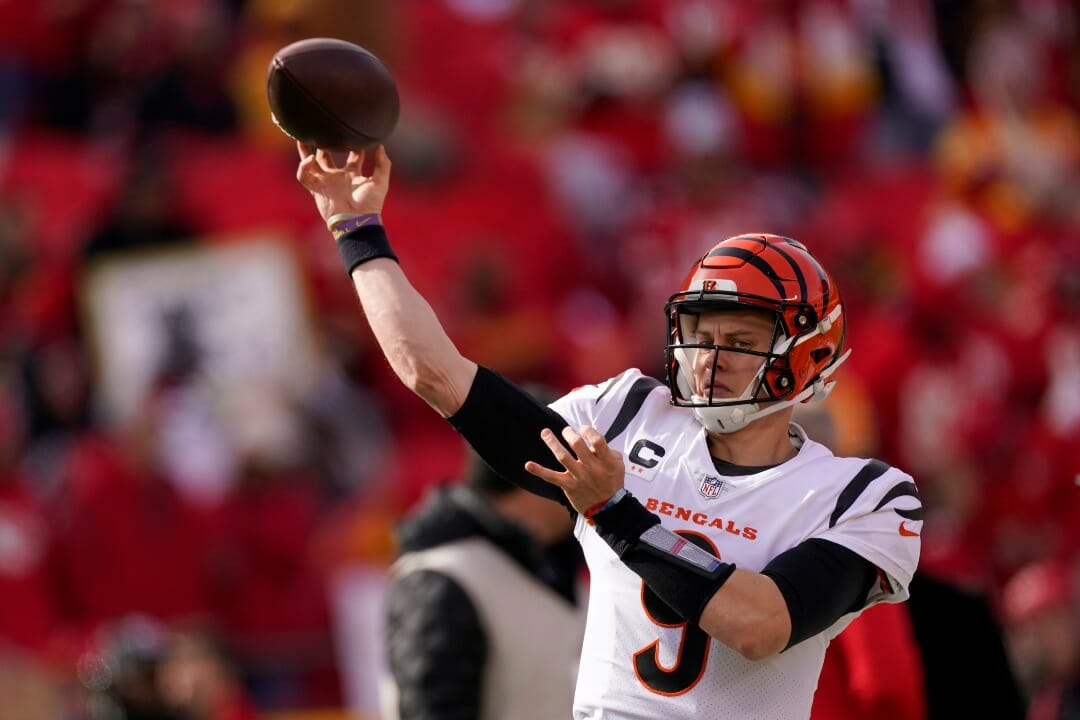 The NFL playoffs once again did not disappoint last weekend with two more great games to set us up for what should be a fantastic Super Bowl. The Kansas City Chiefs looked like the team to beat after a miraculous win against the Buffalo Bills a week ago, and they continued that momentum into the AFC Championship game, jumping out to an effortless 21-3 lead against the Cincinnati Bengals.

But a considerable momentum shift occurred at the end of the first half after a botched end zone play by the Chiefs. After that, the comeback was set for the Bengals. They dominated the second half and went on to win 27-24. The current football odds have the Rams as an early 4.5-point favorite in this one, but let’s take a look at the Cincinnati Bengals offensive trends and see if they can pull off a victory.

Here are the game-day details you need to know:

We lost an NFL legend this week with the retirement of Tom Brady, but a new legendary quarterback could be on the horizon. Joe Burrow has transformed the Bengals from a last-place team into possible Super Bowl 56 champions in just two short years.

Cincinnati won six of its last seven games in the regular season, with the only loss occurring in Week 18 when Burrow and many other starters were resting on the bench. In the six wins, they have outscored their opponents 162-121, averaging 27 points per game. Burrow has thrown for 842 yards in his three playoff games with four TDs and two picks. Keep in mind that they played two of those games in hostile environments on the road.

At the same time, top receiver Ja’Marr Chase has 20 receptions for 279 yards and one touchdown in the playoffs. Cincinnati’s 23rd-ranked run game (102.5 yards per game) continues to be held in check throughout the playoffs, averaging just 88 yards per game.

When it comes to the spread, it’s hard for me to imagine a team that has recently dethroned the AFC champion Tennessee Titans and knocked off the Chiefs twice could be a 4.5-point underdog, but here we are.

This number is way too high, in my opinion. These two teams don’t have much history but are somewhat identical on offense and defense. Both teams averaged 27.1 points per game on offense. On defense, the Rams gave up 21.9 while the Bengals surrendered 22.1. After Wild Card weekend, all six playoff games have been decided by four points or fewer, and I don’t see that changing here.

There are a few things to keep in mind for the under bet. In the six games played by these two teams in the playoffs, only one of those games has eclipsed the 48-point mark. Both quarterbacks are making their Super Bowl debuts, so I believe both teams will ease their way in with a conservative approach.

Things could open up in the second half, but I don’t believe the teams will combine for 48.5 points. Combined, these teams have favored the under 21-18-1 this year.

Who Will Be Crowned This Year’s Champion?

The Cincinnati Bengals offensive trends are paving the way for their first-ever Super Bowl victory, but will Matthew Stafford help the Rams return to their glory days and win their first championship since the 1999 season (when the team played in St. Louis)?

Head to BetMGM’s online sportsbook today to make all of your picks for the biggest game of the year. Sign up today for a risk-free initial bet of up to $1,000.