Can Cincinnati Win on the Road Against Tennessee? 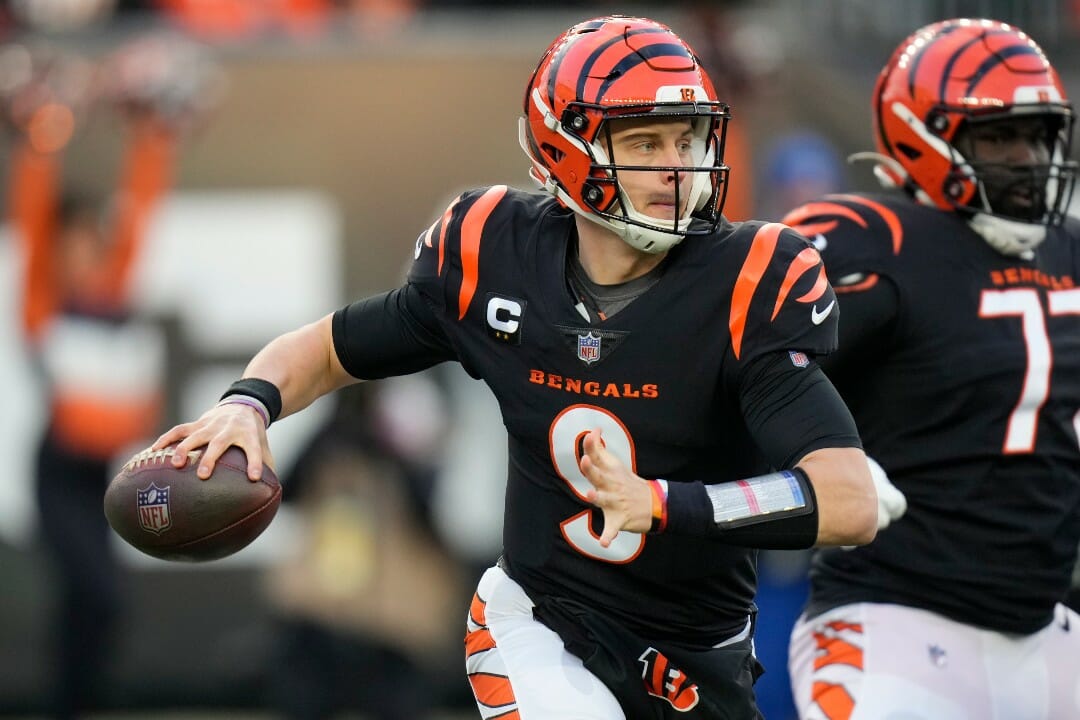 The Cincinnati Bengals are onto the Divisional Round of the NFL playoffs after defeating the Las Vegas Raiders 26-19 on Saturday.

After breaking a 31-year playoff victory drought, the Bengals turn their attention to the Tennessee Titans in the Divisional Round. Football betting odds have Cincinnati as 3.5-point underdogs in this matchup. Continue reading to find out why the Bengals have a chance to pull off the upset this week.

Before diving into the details, here are the facts you need to know about this game.

Joe Burrow and the Cincinnati Offense

Second-year quarterback Joe Burrow has been sensational down the stretch of the season and into the first week of the playoffs. Burrow has 13 touchdowns and zero interceptions in his past five games and has led the Bengals to a four-game winning streak.

The signal-caller also led the league in completion percentage (70.4 percent), yards per attempt (8.9), and finished second in quarterback rating behind Aaron Rodgers. The sophomore improvement from Burrow, paired with elite receiving weapons in Tee Higgins and Ja’Marr Chase, has made this Bengals offense one of most electric in football.

The Bengals Have Shown Poise in Big Games

After back-to-back losses, the Bengals traveled to take on the Denver Broncos in Week 15 in a battle of two 7-6 teams looking to fight back into playoff contention.

The Bengals managed to grind out a 15-10 victory, putting them back into a tie for first place in the AFC North with the Baltimore Ravens. The next week, the Bengals crushed a depleted Baltimore squad 41-21. Cincinnati then hosted the Kansas City Chiefs with a chance to capture the division.

The Chiefs entered the matchup on an eight-game win streak and looked dominant early on, jumping ahead 14-0 in the first quarter and 28-14 shortly before halftime. Burrow and the Bengals responded by outscoring the Chiefs 17-3 in the second half, and after throwing for over 400 yards and four touchdowns, Cincinnati came out on top 34-31.

In their historic Wild Card victory Saturday, Cincinnati took a first-quarter lead against Las Vegas and didn’t look back.

Tennessee locked up the top seed in the AFC by combining a devastating rushing attack and an opportunistic defense. Despite losing star running back Derrick Henry for the latter part of the regular season, the Titans still had the league’s fifth-best rushing unit. Combining a ball-control style of offense with a defense in the top 10 in both sacks and interceptions, the recipe for the Titans’ success is clear.

For the Bengals to pull the upset, Cincinnati will need to rely on their fifth-ranked rush defense to slow down the Titans’ ground game. In addition, Burrow will need to continue his streak of protecting the football while exploiting Tennessee’s eighth-most generous pass defense league-wide.

The Cincinnati Bengals have exceeded expectations this season by winning the AFC North and breaking one of the most infamous playoff droughts in all of sports.

While traveling to face the top seed in the NFL playoffs is a tall task for any team, I like the Bengals as an upset pick this week in Nashville.

What do you think about this Bengals vs. Titans matchup? Make your voice heard by placing a wager with BetMGM’s Tennessee sports betting site. Create an account today and receive a risk-free initial bet worth up to $1,000.