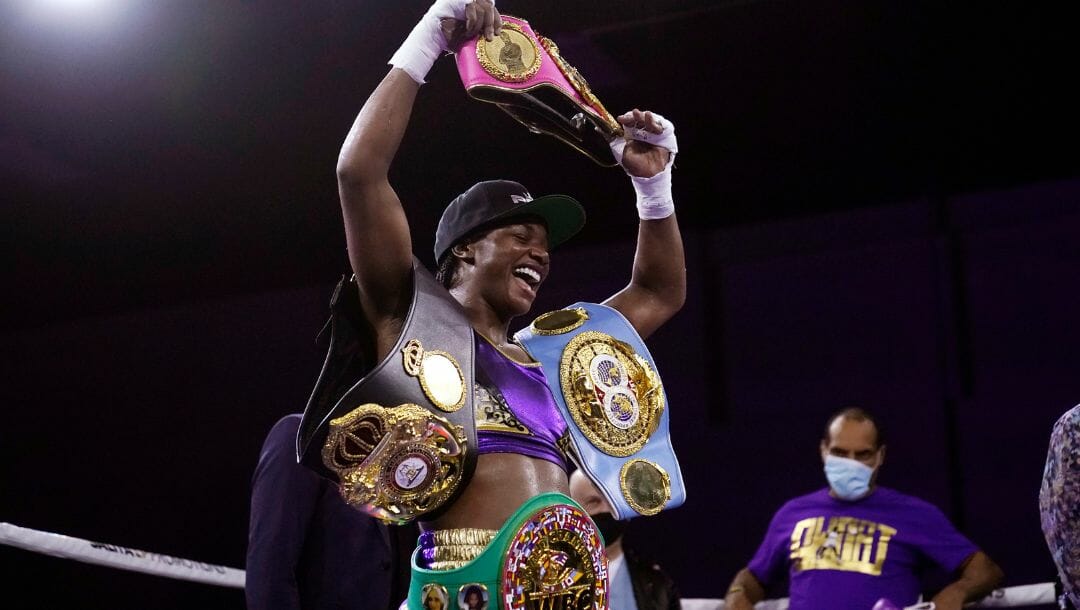 A decade-long boxing rivalry will be renewed this weekend as IBF, WBA and WBC Middleweight Champion Claressa Shields (12-0) takes on the WBO Middleweight Champion Savannah Marshall (12-0) inside the O2 Arena in London, England, for the right to be called the undisputed queen of the division.

Shields and Marshall have the same boxing odds at -110 due to their identical undefeated record of 12 wins apiece. But Marshall won via points in their amateur fight in April 2012 during the preliminary round of AIBA Women’s World Championships in China. This victory could potentially sway fans to place a bet on her on their boxing betting lines.

The loss to Savannah Marshall in 2012 was the lone stain of Claressa Shields’ amateur career as she went on 64 wins with five stoppages. Along with several amateur titles, the 27-year-old’s most significant achievements were her two Olympic gold medals during the 2012 London Olympics and 2016 Rio Olympics. Shortly after bagging her second Olympic gold medal, she turned professional.

“T-Rex’’ became the undisputed super middleweight champion in her fourth fight when she scored a fifth-round TKO win over Nikki Adler to win the IBF and WBC titles. Shields defended those titles as well by fending off the challenges from Tori Nelson (unanimous victory in January 2018) and Hanna Gabriels (unanimous decision win in June 2018).

After ruling the super middleweight division, the Flint, Michigan resident decided to go back to his natural weight of 160 pounds and meet Hannah Rankin for the IBF, WBA and WBC Middleweight Titles in November 2017, where she claimed those titles with a lopsided unanimous decision win to start her reign in the division officially.

Claressa Shields successfully defended the three belts against Femke Hermans in December 2018, Christina Hammer in April 2019, Ivana Habazin in January 2020 and Marie Eve Dicaire in March 2021, all via masterful unanimous decision victories. Her latest casualty was Ema Kozin, whom she defeated in February 2022 with another unanimous decision win.

On the other hand, Savannah Marshall is looking to replicate her 2012 win over her nemesis. Despite falling short of an Olympic medal during her amateur stint, Marshall still collected 61 wins (no KO/TKOs) and absorbed 16 losses. She also won various national and regional boxing titles during her 9-year amateur run.

A lot has changed in the past decade since Claressa Shields and Savannah Marshall’s first meeting in the amateur ranks. Shields, who was once known to be a finisher in the amateurs, is now a master boxer, while Marshall, who didn’t record any KO/TKOs, is now a relentless power puncher. With 12 fights each, the Briton has the higher finishing rate of 83% compared to Shields’ 17%.

In terms of style, the two have transitioned well into the professional setting very well. Shields has developed a counterpunching technique that is heavily based on his strong balance. She counters her very well, using short punches and stiff jabs to keep them at bay throughout the match. She also utilizes that effective jab to close the distance and pour down her patented combinations.

This technique has allowed the ‘’T-Rex’’ to outpoint and outscore her opponents en route to lopsided decision wins. But don’t let her record deceive you because that doesn’t mean that Shields doesn’t have the power to score a knockout victory because she still has that vicious force to sleep any opponents, including Savannah Marshall.

On the other hand, Savannah Marshall has evolved into a ruthless crusher who stops opponents. She relies heavily on her footwork and angles to find the best available punch to land. Of her 12 professional wins, she scored 10 KO/TKOs, which is a testament that she has the power to finish any opposition in front of her.

Marshall also uses a lot of faints and side-to-side movement to set up and load up her thunderous punches, particularly the powerful left hook she perfected. She can also switch stands mid-fight, which allows her to find more angles and connect an uppercut if she finds the right timing.

It is hard to pick a clear between the top two fighters in the 160-pound division because both of them have a great chance of getting the win. But I believe this mega showdown will be reminiscent of the Mayweather-Pacquiao fight in 2015, where a counter puncher faced a volume puncher. The result might repeat itself as well.

I believe Claressa Shields will just wait for Savannah Marshall to attack and counter her throughout the match. Expect the American to neutralize the faints, side-to-side movement and power punches of the Briton to outpoint and outscore her, much like she did to her previous opponents.