Ranking the Best Group of Five Teams of the Playoff Era 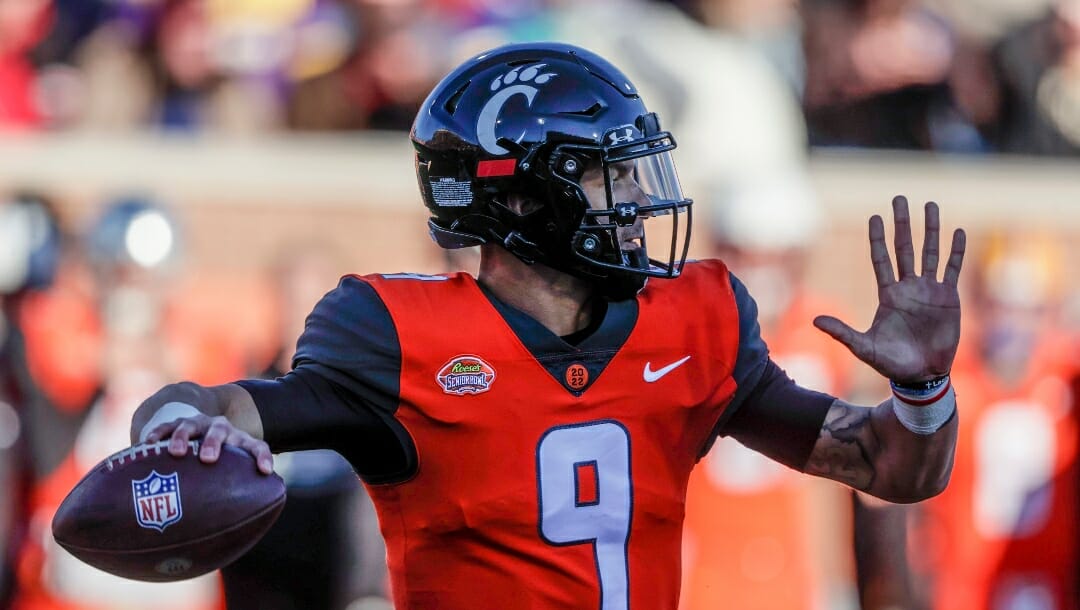 East Carolina was the only Group of Five team in the Week 9 College Football Playoff Rankings in 2014, the first-ever playoff rankings.

None of the 28 playoff bids through the first seven years were earned by Group of Five teams but teams from the American, Conference USA, MAC, Mountain West, and Sun Belt (and five Independents) have gradually climbed the playoff ladder and improved their college football odds in the national picture.

It wasn’t until 2021 that Desmond Ridder and Cincinnati broke the G5 drought, giving the have-nots of college football one of an all-time 32 playoff bids.

Over that time, which Group of Five teams has been the best?

Ranking the 10 best Group of Five teams of the College Football Playoff era:

San Jose State was one of the worst teams in college football in 2018. The Spartans ranked in the bottom 20 nationally in most metrics and statistical categories, won one game, had three losses by at least 30 points, and allowed at least 40 points five times.

Just two years later, in year three of Brent Brennan’s remarkable rebuild, the Spartans were one of the best Group of Five teams of the playoff era. They beat Boise State for the first time ever, won their first conference championship since 1991 (and first-ever Mountain West Championship), had their first-ever undefeated regular season, and finished 20th in the final playoff rankings.

A 21-point loss to Houston in the regular-season finale unfairly shoved Navy’s 2015 team into a pool of largely forgotten elite Group of Five teams.

The Keenan Renyolds-led Midshipmen ran for 348 yards in an October loss to Notre Dame in which they trailed by a field goal at halftime and would’ve had a real upset chance if not for three turnovers. Reynolds, who finished fifth in the Heisman voting, led blowout wins over nine-win Memphis and eight-win Air Force, and a 16-point win over Pittsburgh in the Military Bowl.

One year after UCF became the first G5 team to finish in the top 10 of the playoff rankings, no G5 team finished in the top 15. The post-UCF hangover hurt the national profile of Memphis, whose dominant offense led a conference-championship season in which their only regular-season loss was a two-point defeat at Temple aided by botched officiating.

The Tigers beat SMU and Cincinnati (twice) in the final month on their way to a second American Championship in the last six years and the 17th spot in the final playoff rankings.

Three years after little-known P.J. Fleck began his head-coaching career with a one-win 2013 season, he led Western Michigan to a perfect regular season and their first MAC Championship since 1988 (and third ever).

Unfortunately, the Broncos played no one; they ran through one of the nation’s worst schedules (109th in S&P+ SOS) before losing to Wisconsin in the Cotton Bowl. They committed just eight turnovers all year, averaged 229 rushing yards, posted two shutouts, and allowed only one opponent to score more than 31 points.

The second of four 2020 teams in the top 10, BYU lost six Power Five opponents to cancellations and settled for a mediocre schedule (65th in SOS) highlighted by Coastal Carolina and Boise State. The Cougars annihilated Boise State, handing the Broncos their worst home loss (51-17) since 1996, and fell one yard shy against Coastal Carolina.

Without the cancellations, BYU, behind a potential top-10 pick in quarterback Zach Wilson and one of the nation’s best offensive lines, might’ve had an outside playoff shot. Still, they won 11 games, tied for the fifth-most in program history, and made their first-ever appearance in the playoff rankings.

In 2019, Coastal Carolina celebrated a monumental victory over Kansas, the Power Five’s longtime doormat. In 2020, Coastal Carolina beat two top-25 playoff teams, became the second-ever Sun Belt team to earn a playoff ranking, and nearly matched the combined win total from their first three seasons in the FBS (13 vs. 11).

Grayson McCall led a Chanticleers’ offense that ranked in the top 25 nationally in nearly every area, including scoring (18th), third-down conversions (fifth), yards per play (18th), and rushing yards per game (13th). They were the best Sun Belt team of all time.

Five years after Kevin Sumlin set the Houston record for 13 wins, Tom Herman matched it with 13 wins in 2015, his first season as head coach.

With Greg Ward Jr. leading a dominant and balanced offense, the Cougars scored 50 points four times and only twice failed to score 30. Unfortunately for them, one of those sub-30 games came in an ugly three-point loss against UConn. And while it didn’t cost them a New Year’s Six bowl, it did end slim hopes of a playoff shot.

Even with the UConn loss, Houston finished with a strong résumé highlighted by three teams who finished in the final playoff rankings: No. 9 Florida State, No. 21 Navy, and No. 24 Temple. They also beat nine-win Memphis and seven-win Cincinnati en route to an 11-1 regular season.

UCF’s 2017 team was the loudest and generated the most commotion of any team, G5 or P5, in playoff history, but it wasn’t the best G5 team since 2014.

The offense was unstoppable, averaging 530 yards, including 332 through the air, in scoring at least 31 points in all 13 games. McKenzie Milton & Co. began a streak of 30-point games that continued for all of 2018 before ending at 31 games in 2019.

Unfortunately for the pseudo national champions, they played a soft schedule in setting a program record with 13 wins. One-score wins over USF and Memphis highlighted a schedule that ranked 97th nationally and kept them outside the College Football Playoff picture.

UCF lost Scott Frost but returned 74% of their production from 2017, tied for second-most in the FBS. In reaching 13-0 for a second straight season (before a loss to LSU in the Fiesta Bowl), the Knights won all but one game by at least 11 points, including a 25-point blowout of 11-win Cincinnati.

Once again, the schedule was weak (107th), and while they finished closer to the playoff field (No. 8 in the final rankings, an all-time G5 high), UCF wasn’t truly in the playoff picture.

The Bearcats went 9-0 and won the conference championship against a mediocre schedule that featured just one team who finished in the final playoff rankings (No. 24 Tulsa). Seven of eight wins came by at least 14 points, including a 29-point blowout of SMU.

Despite poor scheduling luck – Indiana sucked, Notre Dame’s strength of schedule was weak, the American was weak – Cincinnati landed in the playoff thanks to the Notre Dame win and third-quarter ambush of Houston in the AAC Championship.

Consensus All-American Sauce Gardner, Jim Thorpe Award winner Coby Bryant, and Paul “Bear” Bryant Award winner Luke Fickell led the first 13-win season in program history. And while it ended with a playoff loss to Alabama that was not remotely as close as the 27-6 final score suggests, last year’s Cincinnati was the best G5 team in the playoff era.