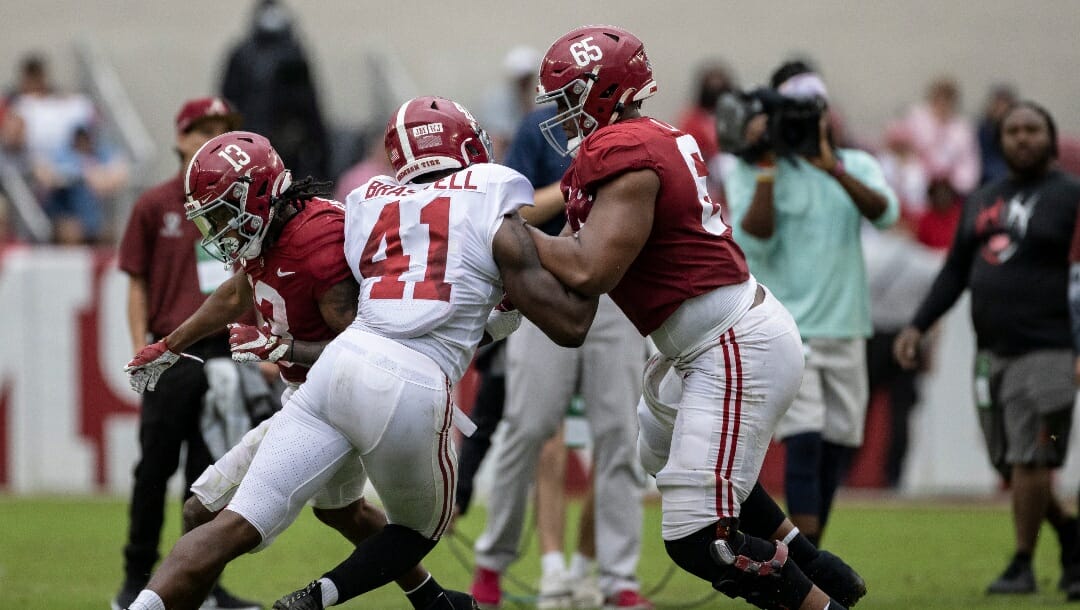 The Crimson Tide came up just short in the 2021 College Football National Championship, losing 33-18 to Georgia.

The good news? It’s not like the gap between them and the Bulldogs was ever wide. The Tide dominated in the SEC Championship Game with a 41-24 victory over the Bulldogs. With 2021 Heisman Trophy winner Bryce Young at quarterback and another potential Heisman in Will Anderson Jr. leading a fearsome defense, the Tide are back as national championship favorites in college football betting.

Here’s a look at Alabama’s football schedule with dates, times, opponents, and analysis:

Utah State had a good 2021 season, winning the Mountain West and defeating Oregon State in the Jimmy Kimmel LA Bowl. Alabama, however, is not remotely similar to Oregon State and should easily handle an Aggies team that ranks 113th in returning production.

Nick Saban’s perfect record against his former assistants (24-1) may be no longer, but it’s still an impressive track record.

Steve Sarkisian’s group may average 40 points per game this season with weapons like Bijan Robinson, Xavier Worthy, and Isaiah Neyor — but this is a stiff test for a young, untrustworthy offensive line and presumptive starter Quinn Ewers, who has never started a game at this level before.

My poor friends at FOX got slim pickings Week 1.

ULM improved to 4-8 in Year 1 under Terry Bowden after bottoming out at 0-10 in 2020 and firing Matt Viator. This game won’t be competitive.

This should be a blowout for the Tide to open the conference schedule. The Commodores have just one conference win in the last three years.

Sam Pittman and company are cooking with gas in Fayetteville, but they return only 10 starters. Treylon Burks gave the Tide fits a year ago in a close 42-35 Tide victory, but the Hogs lack such a dynamic receiving weapon this year.

This will be one of the most anticipated games of the season after Jimbo Fisher and Nick Saban’s back-and-forth this offseason.

Poking the bear is an unwise idea and you can guarantee Saban and Alabama will be fired up for this game at home against a team that upset them a year ago and took to the tabloids this offseason.

Worth noting: As of late June, Texas A&M is tied with USC for the fifth-best national championship odds at the online sportsbook.

Josh Heupel has the Volunteers’ offense humming and now they get another crack at the Tide after keeping things close (21-17 at one point in the second half) a year ago.

Hendon Hooker and Cedric Tillman must stretch out the Tide’s defense in what is a difficult scheduling spot for Saban.

The Tide dismantled Mike Leach and company in a 49-9 victory on the road a year ago. Quarterback Will Rogers returns as one of 16 starters and the Rebels figure to be more competitive at home in a tricky scheduling spot for the Tide.

This will be the first LSU-Bama game of the Brian Kelly era.

The Tigers rank just 82nd in returning reproduction but have a lot of transfers and could be clicking by this juncture in the season. Under Saban, the Tide are 17-12-1 after a bye week.

Lane Kiffin is another coach who brings in a ton of talent in the transfer portal (quarterback Jaxson Dart and running back Zach Evans among them).

They could be clicking by this point in the season and the game will be played in Oxford, where the Tide struggled in a narrow 63-48 victory in 2020 that was closer than the score indicates.

Cakewalk matchup here that allows the Tide to rest up after two tough road games and prepare for Auburn. This is what some in the business would usually refer to as a trap game (maybe point-spread wise), but that won’t be the case when walking over Austin Peay.

Bryan Harsin and the Tigers are reeling after a turmoil-filled offseason. The Tide get the advantage of playing at home and will likely take every opportunity to roll over a rival and kick them while they’re down.