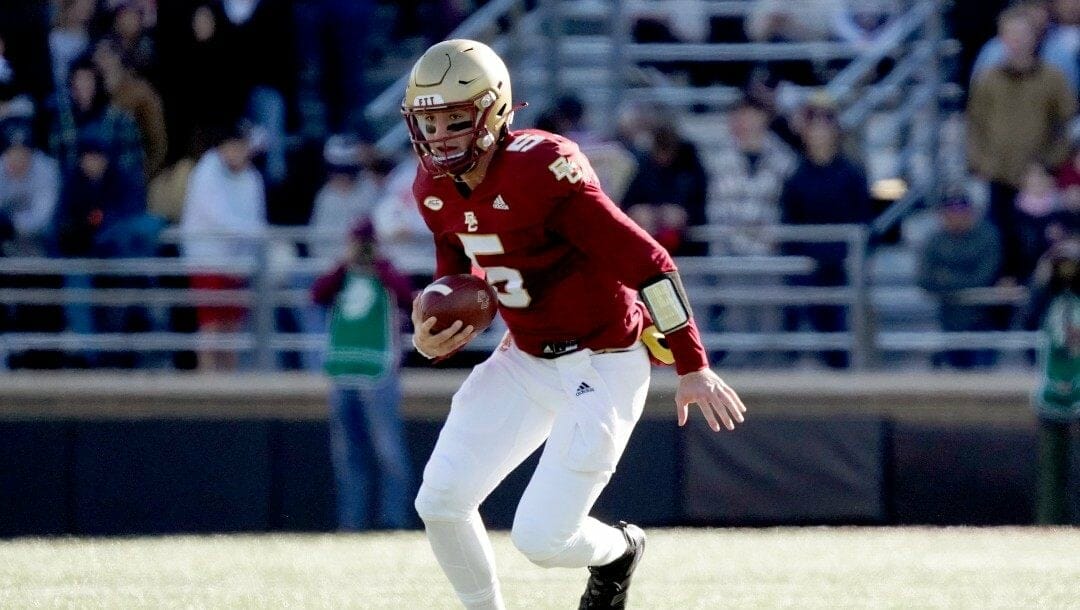 Jeff Hafley returns for his third season as the head coach of the Boston College Eagles with his eyes set on a surprising season.

They have an over/under win total of 6.5 when it comes to college football betting.

Phil Jurkovec returns at quarterback, giving the Eagles an experienced starter who possesses true NFL talent and could show vast improvement now, finally healthy. Zay Flowers is one of the ACC’s best receivers, and Patt Garwo returns at running back after going for 1,000 yards a year ago despite beginning the season fourth on the depth chart.

This play was *wild*. Boston College QB Phil Jurkovec throws an interception, then runs down the field and eventually recovers a fumble after the defender loses the ball.

An INT and FR on the same play. pic.twitter.com/TTsnY2FGm4

The defense allowed only 22.2 points per game last year and possesses one of the best secondaries in the conference.

How does the schedule shape up with all of the pieces in place to shine in 2022? Here’s a look at BostonCollege’ss schedule with dates, times, opponents, and analysis:

The Eagles have had the upper hand in this matchup, winning 11 straight games against their former Big East foe.

Conference play kicks off early with a Week 2 visit to Blacksburg to face the new-look Virginia Tech Hokies in Year 1 of the Brent Pry era. The Eagles have won six straight road openers.

A winnable game against the Maine Black Bears allows the Eagles to find their groove before ACC play gets into full swing. Maine went 6-5 a year ago.

This has been a difficult matchup for the Eagles, who are just 1-10 in the last 11 meetings. The Florida State Seminoles return 16 starters and rank 11th in returning production.

The Louisville Cardinals are another potential surprise team in the ACC, ranking 14th nationally in returning production while bringing back star quarterback Malik Cunningham.

A second straight home game for the Eagles, albeit against stiff competition. This will be their annual Red Bandana Game.

Both teams enter refreshed off a bye week in what should be a competitive game. The visiting team has won seven straight in this series.

The Eagles have won four straight in this series and figure to be heavily favored in this spot.

The Duke Blue Devils are coming off a bye week, and this is a difficult scheduling spot considering the Eagles will be playing on short rest for this Friday game.

The first of a tough two-game road stretch begins in Raleigh. The NC State Wolfpack return 17 starters and figure to compete for the Atlantic Division title.

Drawing Notre Dame in the non-conference slate is never easy, and playing on the road even more so. Boston College has won just one of the last nine meetings.

Upsets have been rife in this series, so the Eagles must be on high alert for this home finale.