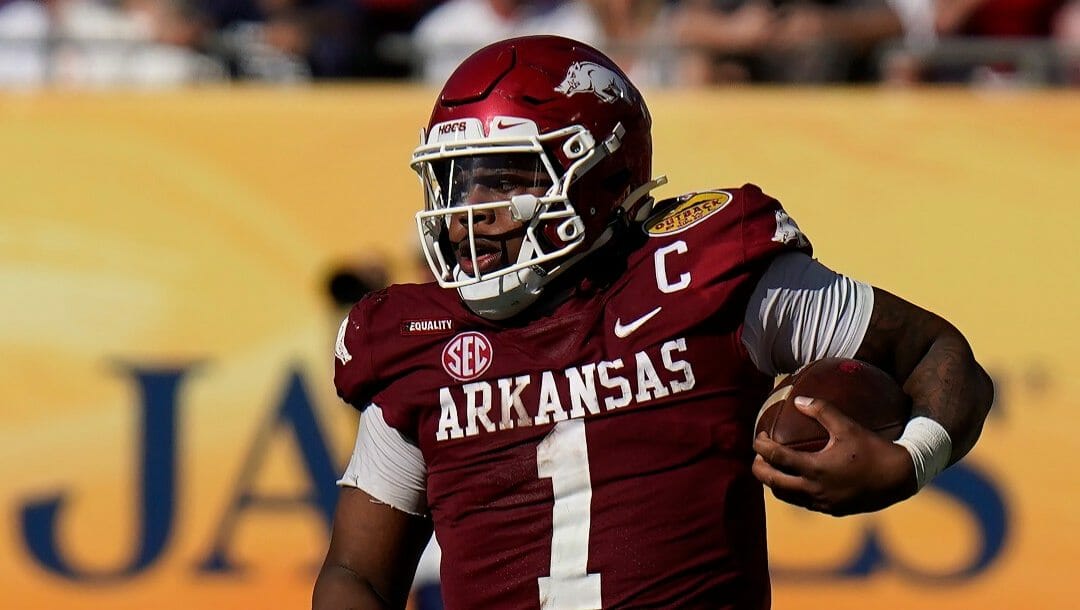 When it comes to the 2022 Heisman Trophy odds, many will look to Bryce Young, who is currently leading the way at +250. But he’s not the only player in the mix.

Plenty of other players could make a strong case, including several whose teams are at the top of the college football national championship odds list.

With that in mind, here are a few players who should be considered longshots at the moment to win the award.

Texas A&M quarterback Max Johnson is a risky selection, but his preseason odds may end up looking very generous in hindsight.

Johnson transferred from LSU over to College Station to play for Jimbo Fisher. First, he’ll have to win the job as he competes with a crowded quarterback room that includes dual-threat Haynes King, who started the first two games of last season, before fracturing his leg, and five-star signee Conner Weigman.

It’s no sure thing that Johnson comes away victorious in this heated position battle in camp, but he’ll end up looking like terrific value if he does.

Johnson has the most experience of the three after starting for two seasons in Baton Rouge, so there’s a case to be made that he’s the favorite to win the gig.

Texas A&M signed arguably the best recruiting class of all time in 2022 and is expected to make a strong push toward the College Football Playoff.

There doesn’t appear to be another true Heisman contender on their offense (although running back Devon Achane is poised for a huge season), so the quarterback would be sure to receive praise if the Aggies are as successful as many pundits anticipate this coming season.

Arkansas quarterback KJ Jefferson checks all of the boxes that one should look for in a Heisman contender and is our favorite longshot for the award with a massive +12500 price tag.

He plays quarterback in a Power 5 conference, which has been the case for nine of the last 11 winners. The dual-threat QB managed an impressive 3,340 total yards and 27 touchdowns in his first year as the starter in Fayetteville.

Sam Pittman and the Razorbacks appear to be cooking with gas, as this is a revitalized program making waves in the SEC. The Hogs finished with a 9-4 record last season despite playing one of the most difficult schedules in the country.

Jefferson loses the services of star wide receiver Treylon Burks. That being said, the loss of Burks may put the onus on Jefferson to produce even more as a rushing threat, which could lead to a boost in overall production.

Listed at 6-foot-3 and 245 pounds but appearing even larger, Jefferson has a rare blend of size, speed, and athleticism. There’s a bundle of untapped potential still waiting to be unleashed and he’ll have every opportunity to prove his worth against what will yet again be a daunting schedule.

If the Razorbacks continue their upward trajectory in 2022, Jefferson will seem like a steal at these odds. Even if he doesn’t win the award, his price will likely end up looking much different midway through the season.

Whoever wins the starting quarterback job for Texas Tech could be in for a monster statistical season.

Donovan Smith, a 6-foot-5 dual-threat sophomore, is listed with the shorter odds, but we’re not sure that’s deserved. Oregon transfer Tyler Shough won the job out of camp last year and started the first four games before a broken collarbone sidelined him for the season.

Our primary reason for interest in these Red Raiders signal-callers is their affiliation with new offensive coordinator Zach Kittley, who recently oversaw a Western Kentucky offense break NCAA records in the quarterback room.

The Hilltoppers’ Bailey Zappe broke the FBS record for passing yards (5,967) and touchdowns (62) a season ago. That was Zappe and Kittley’s first campaign at the FBS level after making the move from Houston Baptist, so we’ve seen Kittley’s offense translate sublimely in year one of a transition before.

While it’s highly unlikely either Smith or Shough matches Zappe’s production from a year ago, it certainly wouldn’t be a surprise to see whoever wins the starting quarterback job put up gargantuan stat lines in the Big 12 and garner some Heisman buzz.