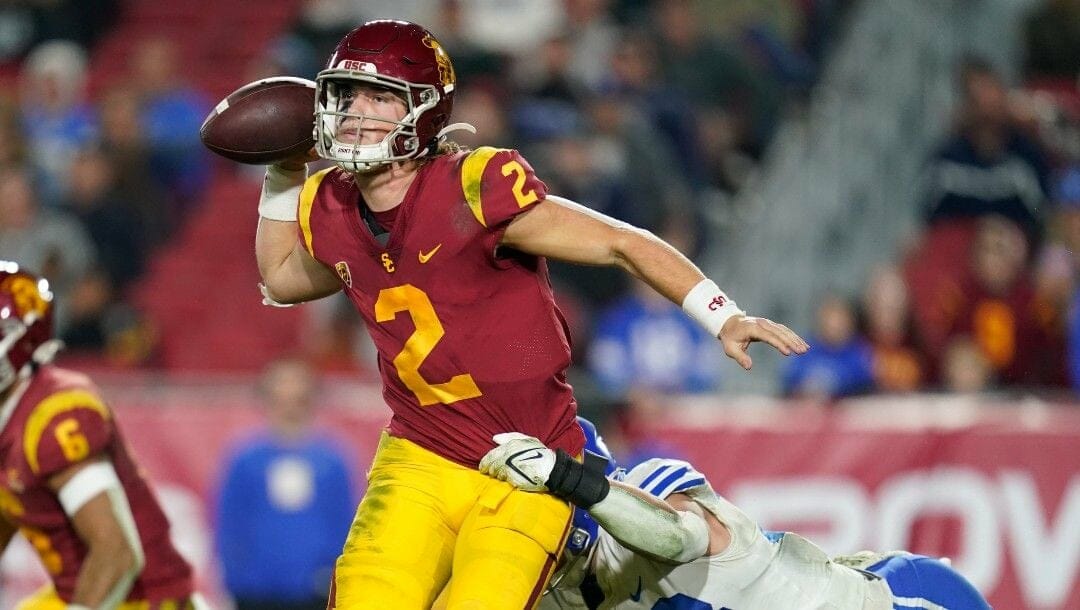 When it comes to college football, one of the most popular things to bet on is the Heisman Trophy.

The Heisman Trophy odds are already out for the 2022 season and it’s a wide-open race with many players in the mix.

We’ve navigated the board and narrowed it down to a few players we believe have an outside shot at taking home the prestigious award in 2022.

A four-star recruit who came out of the state of Utah with stellar tape, Dart played sparingly in his true freshman season at USC. Inserted into the Washington State game after an injury to starting quarterback Kedon Slovis in 2021, he immediately made an impact with 391 passing yards and four touchdowns.

It was quite the breakout performance and one that put the college football world on notice.

Fast forward to the 2022 season, Dart finds himself in Oxford, Mississippi after transferring to (likely) assume the starting gig for Ole Miss.

He was one of the best signal-callers in the transfer portal and was hand-selected by Lane Kiffin to run Ole Miss’ offense. The Rebels won 10 games a year ago and are relevant enough in the SEC to garner suitable attention for a Heisman campaign.

They averaged 39 points and 33 points a game in the first two years of the Kiffin era, so some impressive performances could be on the way for Dart.

The Ohio State star receiver is one of the top non-quarterback options on the board after amassing 95 receptions for 1,606 yards and 9 touchdowns a year ago.

We’ve mostly narrowed down our selections to quarterbacks at Power 5 schools given they’ve won the award nine of the last 11 years. That being said, receiver DeVonta Smith won the award as recently as 2020.

Ohio State returns C.J. Stroud (+400) at quarterback and the team is expected to put up big numbers offensively after averaging an astronomical 45.7 points per game in 2021.

Receivers Chris Olave and Garrett Wilson are off to the NFL, vacating 135 receptions, 1,994 yards, and 25 touchdowns. Smith-Njigba should assume an even greater share of the passing workload and is our favorite to be the most productive receiver in the country.

He played one game as the primary receiver without the services of Olave and Wilson — the Rose Bowl against Utah — and exploded for 15 receptions, 347 yards, and 3 touchdowns.

Ohio State should threaten to be one of the top teams in the country and has the third-best odds to win the national championship at +600. Therefore, relevancy isn’t a concern.

Quarterback? Check. Power 5 conference? Check, with a bonus of garnering the most attention in the SEC. Production? Check.

Tennessee quarterback Hendon Hooker checks all of our boxes as a Heisman candidate and therefore we like his preseason odds.

He transferred from Virginia Tech and assumed starting duties early on in the season, ultimately amassing 3,565 total yards and 36 touchdowns a year ago.

Josh Heupel’s up-tempo offense paid immediate dividends in his first year in Knoxville. The Vols averaged 39.3 points per game and Hooker was the biggest beneficiary.

For Hooker to have a legitimate chance to win the award, the Vols will need to improve upon their 7-6 record from a season ago, but the dual-threat quarterback will have every opportunity to showcase his talents for voters while playing in the SEC.