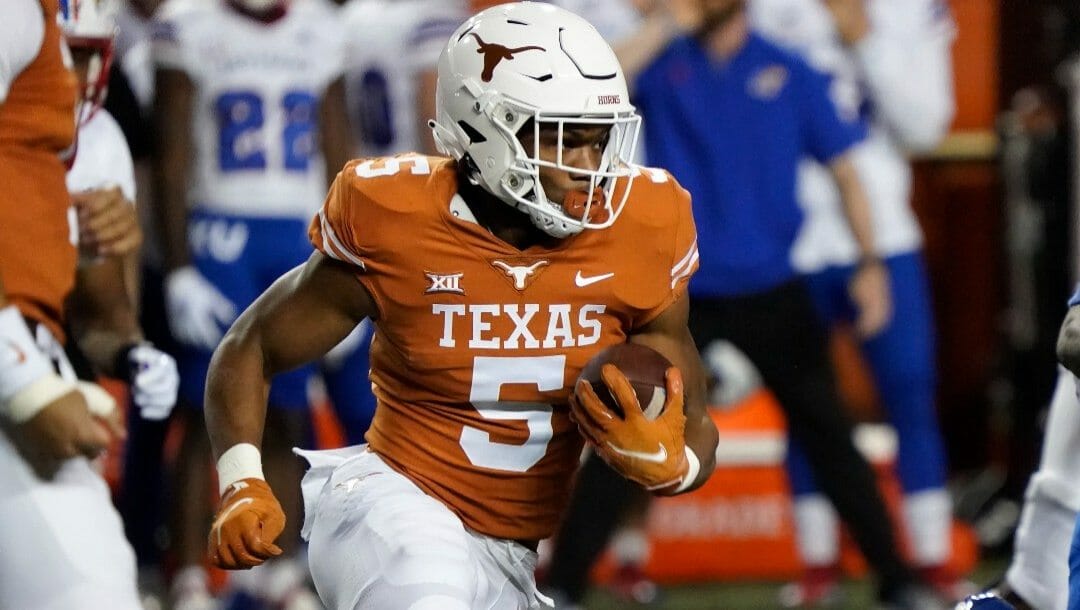 It was a rocky start for Steve Sarkisian at Texas, as the Longhorns finished with a losing record in the first year under his leadership.

That hasn’t stopped the hype train from leaving the station for year two. Preseason Heisman Trophy odds have been released and two Longhorns are among the top 5.

Five-star phenom Quinn Ewers transferred from Ohio State to compete for the starting job, while star running back Bijan Robinson is the Heisman favorite among non-quarterbacks.

Big things are expected from this offense in 2022, but do they deserve two players as favorites for the award?

Texas running back Bijan Robinson is the favorite non-quarterback to receive the award. That begs the question: How likely is a non-passer to win the trophy?

Nine of the last 11 winners have been a quarterback from a Power 5 program, so it’s usually a waste of money to look elsewhere. Alabama’s DeVonta Smith (2020), Derrick Henry (2015), and Mark Ingram (2009) are the last three non-quarterback winners.

What do they have in common? Well, they all played for Alabama — which Robinson does not.

Verdict: He’s deserving of the top odds for a non-quarterback. That being said, even if Robinson puts up the best numbers in the country at running back, he’s unlikely to win the award unless Texas has a wildly successful season.

The Sarkisian era got off to a bumpy start in 2021, as the Longhorns lost six straight games at one point — including a 57-56 defeat to Kansas.

Considering Robinson’s quarterback, Quinn Ewers, is also top 5 in the preseason Heisman odds, the accolades are likely to be shared even if Texas surpasses expectations this season.

Ewers decided to forgo his final season of high school and reclassified to the Class of 2021.

A unanimous five-star recruit and the top-rated player in his class, Ewers rode the pine for one year at Ohio State before transferring back home to Texas, where he’s expected to immediately start for Sarkisian.

Ewers will spearhead a potent offensive with plenty of weapons, including arguably the most talented running back in the country in Robinson and star receiver Xavier Worthy.

Verdict: History tells us that Ewers has a higher probability of taking home the Heisman Trophy than his teammate Robinson, given the simple fact that Ewers plays the quarterback position.

It’s not uncommon for Texas to be given too much respect in the futures betting market and Ewers has virtually no game experience under his belt at the college level.

It will be a big adjustment for him to make, albeit one lessened by his stay in Columbus a year ago. He has the same downfalls as Robinson in that a huge turnaround is needed for the Longhorns, but it’s worth noting that the Big 12 could be vulnerable given the upheaval at Oklahoma.