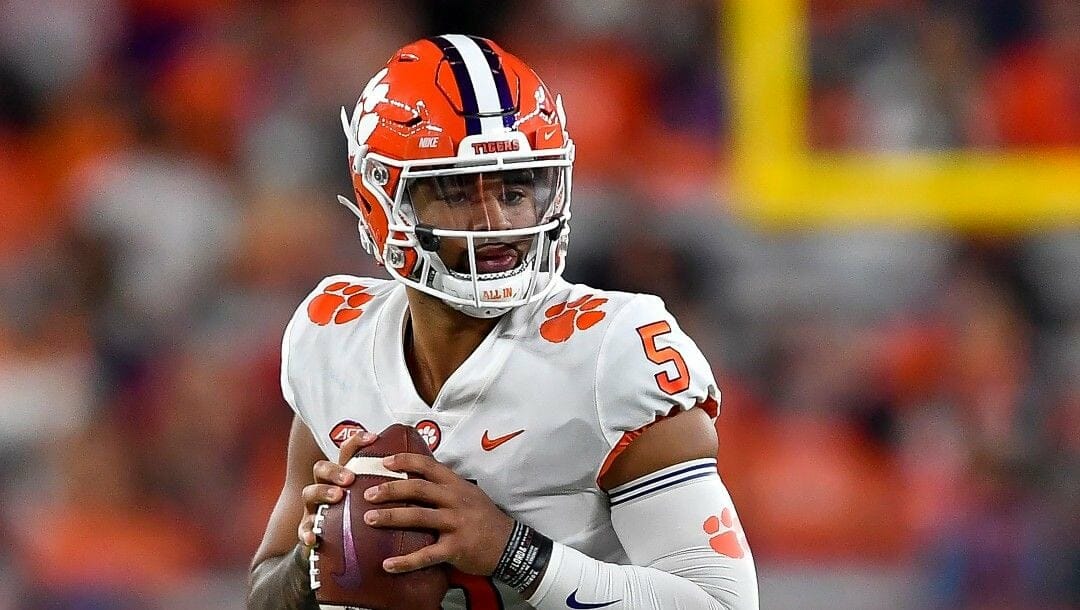 College football won’t be starting for another few months, but until digging into the college football odds on a weekly basis begins, it may be worth taking a look at a few futures for the upcoming season.

One of them being the Heisman Trophy.

Heisman Trophy odds are already up and there are two intriguing quarterbacks listed with +2000 NCAAF odds to take home the prize: Clemson’s DJ Uiagalelei and Florida’s Anthony Richardson.

Let’s dive in and see who’s the better bet.

Clemson quarterback DJ Uigalelei was among the favorites a year ago but vastly underperformed expectations in his first year as the starter.

Stepping into Trevor Lawrence’s shoes was never going to be easy, but Uiagalelei’s numbers were downright abysmal. He averaged only 6.0 yards per attempt and threw more interceptions (10) than touchdowns (9).

Following some turnover on Clemson’s coaching staff and a reported commitment from Uiagalelei to lose weight this offseason, the betting market is expecting a dramatic turnaround.

While improvement is certainly to be expected (nowhere to go but up), we’re dubious that it’ll be dramatic enough for the Clemson signal-caller to be considered for the Heisman award. It’s no sure thing that Uiagalelei retains his starting position, as he’ll battle with five-star early enrollee Cade Klubnik in camp.

The dual-threat QB is capable of beating opponents with his arm and his legs, as he showcased his explosive abilities by scoring a touchdown every 12.8 times he touched the ball in limited reps behind Emory Jones. With Jones in the transfer portal, Richardson is expected to be the full-time starter but must prove that he can stay healthy after struggling through injuries a year ago.

Reports out of spring practice are that he looks good and is returning to health much quicker than initially anticipated, leading us to believe that he’ll be full-go to start the year.

He has tremendous potential, but it’s yet to be seen how this offense changes under new coach Billy Napier. His offenses in Louisiana never yielded elite statistical seasons from a quarterback, although he never possessed a signal-caller of Richardson’s talent.

Verdict: Despite Richardson’s immense potential, we don’t see him as ready to challenge for the Heisman trophy … yet. While the Napier hire has been almost universally praised, it’s likely that this Florida team needs some time before returning as a program that will upset the balance of the SEC.

We view Uiagalelei as the better bet of the two at +2000 odds, although we aren’t running to the betting window to throw our money down on the Clemson passer either. Especially, since we’ve seen Dabo Swinney pull his returning starter in favor of a freshman quarterback before.

That being said, the pathway is there for Clemson to make a run to the playoff while Uigalelei capitalizes on his talent as the leader of what could be one of the best teams in college football if things fall into place.