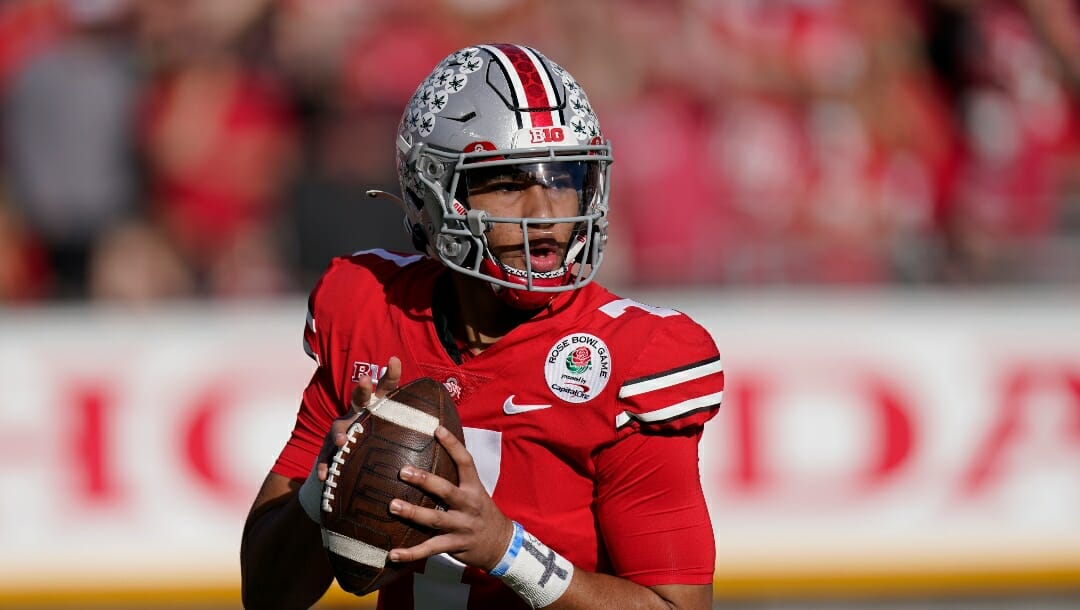 It’s never too early to take a look at college football futures.

Odds have been released over at BetMGM for the 2022 Heisman Trophy, so we’re going to dive in by taking a look at the early favorites to win the award. Are the frontrunners deserving of their price tag? Let’s find out.

Bryce Young won the 87th Heisman Trophy awarded last year in Manhattan to become the first recipient ineligible for the NFL Draft since Lamar Jackson in 2016.

He’s the understandable favorite for the award given his incredible talent, production, and position as the starting quarterback for the Alabama Crimson Tide. Nick Saban’s crew is anticipated to begin the season as the top-ranked team in the country and are the preseason favorites to win the 2023 National Championship; the Tide is +200 in college football national championship odds.

While Alabama will surely reload, Young loses his top two offensive weapons (Jameson Williams and John Metchie) to the draft.

Verdict: Young is the rightful favorite, but these odds are too steep for us to consider. There’s only been one repeat winner in the award’s history — Ohio State’s Archie Griffin in 1974 and 1975.

While Young could certainly end up holding the trophy yet again, the odds don’t seem to accurately reflect his chances of taking home the hardware.

CJ Stroud exploded onto the scene in 2021, tossing 4,435 yards and 44 touchdowns in his first year at the helm of Ohio State’s potent offensive attack.

He seemed to only get stronger as the season went on, finishing with an absurd stat line in the Rose Bowl that left a lasting impression. Stroud completed 37 of 46 passes against Utah for an eye-popping 573 yards and six touchdowns.

Similar to Young, Stroud loses two of his top receiving options to the NFL Draft in Chris Olave and Garrett Wilson. The cupboard is hardly bare in Columbus, however, as a deep and uber-talented receiving room will be led by emerging star Jaxson Smith-Njigba, who accumulated 95 receptions, 1,606 yards, and nine touchdowns as a sophomore in 2021.

Stroud and Smith-Njigba provided a glimpse of what they could accomplish sans the services of Olave and Wilson, connecting for an absurd 347 yards and three scores in the Rose Bowl. Outside of JSN, Marvin Harrison Jr. is primed for a breakout season while five-star talents Emeka Egbuka and Julian Fleming should provide ample weapons for this potent aerial assault.

Verdict: Stroud seems like a great bet to take home the Heisman Trophy.

Ohio State has the third-highest odds to win the national championship and will be nearly universally selected by pundits to return to the College Football Playoffs after a one-year absence.

If the Buckeyes found the amount of success that many anticipate this season, Stroud should be a big part of that and put up video-game numbers.

USC’s Caleb Williams followed his coach Lincoln Riley from Norman, Oklahoma, to Los Angeles, California, this offseason in a monumental gain for the Pac-12.

Williams played well as a true freshman last season in the Red River Rivalry, relieving Spencer Rattler and leading the Sooners back from a 28-7 deficit to a 55-48 victory. It was an unforgettable performance and one that Williams may have difficulty replicating in the PAC-12, which draws significantly less interest from national media.

Verdict: Williams is a near-lock to put up big numbers both through the air and on the ground in Lincoln Riley’s offense against a PAC-12 schedule.

That being said, the last Pac-12 player to take home the award was Oregon’s Marcus Mariota in 2014. You have to go back to USC’s Reggie Bush in 2005 (since vacated) before him. Williams’s odds seem about right — he’ll find success in the PAC-12, but the Trojans aren’t expected to be a national title contender yet, which will hamper his chances.