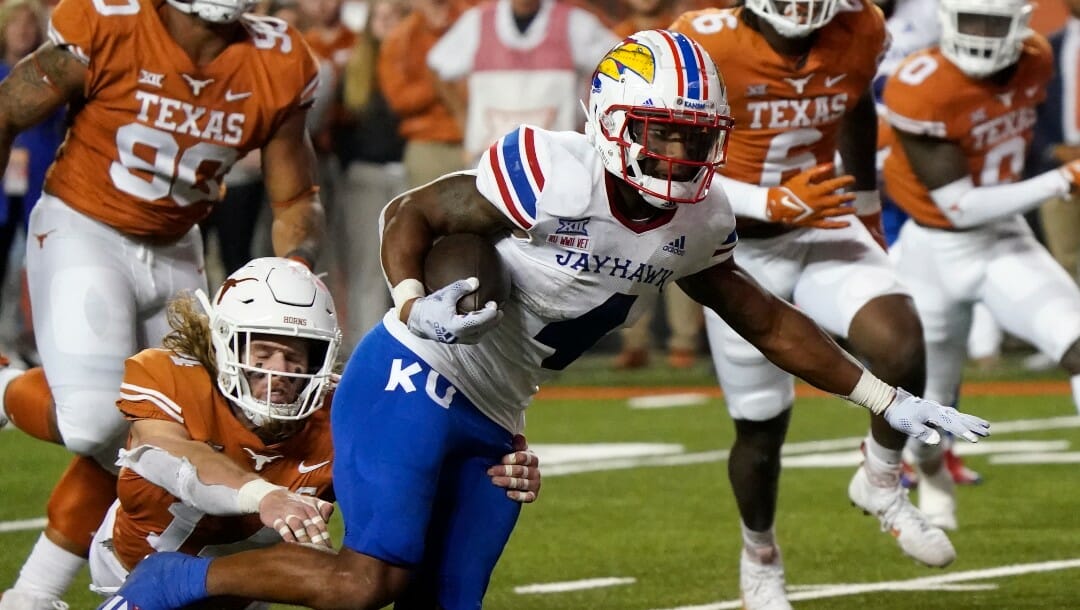 When Lance Leipold took over the head coaching duties before the 2021 season, it was assumed that he had a lengthy rebuild. Last year’s 2-10 record may not seem impressive at face value, but it was an improvement after an 0-9 debacle in 2020.

The Jayhawks were one of the youngest teams in the country and played like it for most of the year. They showed proof of concept to end the season with three consecutive strong performances highlighted by an overtime win over the Texas Longhorns. The rushing attack should keep the sticks moving, led by Devin Neal, and Jalon Daniels looked solid at quarterback to end the year. Eight starters return defensively, and improvement is expected, but can they surpass their win total of 2.5 in college football betting?

Lance Leipold: "We are not in the moral victory business." #KUfball

Here’s a look at Kansas’s schedule with dates, times, opponents, and analysis:

This is the first-ever meeting between these schools. Kansas will need to be ready after narrowly defeating FCS school South Dakota 17-14 in last year’s season opener.

ESPN College GameDay passed on this game for a trip to Columbus.

The Jayhawks have lost eight straight in this series and have just one win in 11 tries.

This is a difficult non-conference game against one of the Group of 5’s best teams. To make matters worse, it’s the second of two straight road tests.

This is a winnable non-conference game against the Duke Blue Devils, who finished just 3-9 a year ago. Both teams will find wins hard to come by in 2022 and will be battling fiercely in this contest.

The Cyclones must replace a four-year starter at quarterback in Brock Purdy and the 36th overall selection in the NFL Draft at running back in Breece Hall, so this might be the season to catch another upset.

The Jayhawks’ third-straight home game comes against the TCU Horned Frogs. This will be the first time in over 20 years that someone other than Gary Patterson will be roaming the sidelines in Fort Worth as Sonny Dykes takes over head coaching responsibilities.

It looked like the Jayhawks might pull off the unthinkable when they held a 10-0 lead at the half. The Oklahoma Sooners pulled away in the second half for a 35-23 win to make it 17 straight in this series.

This is a tough scheduling spot, the second of back-to-back road conference games against two outstanding teams. The Baylor Bears won the Big 12 Championship last year and have an emerging coaching star in Dave Aranda.

Kansas returns from a bye to face the Oklahoma State Cowboys. The Jayhawks lost 12 straight meetings, with their last victory against the Pokes coming in 2007.

A year ago, Kansas pulled off one of the season’s biggest upsets in a 57-56 overtime victory over Texas. The Longhorns will be hungry for revenge, and this matchup takes place in Austin.

Will Steve Sarkisian be on the college football hot seat in mid-November?

The Jayhawks conclude the schedule with a road trip to Manhattan. Kansas has lost 13 straight games in this rivalry.