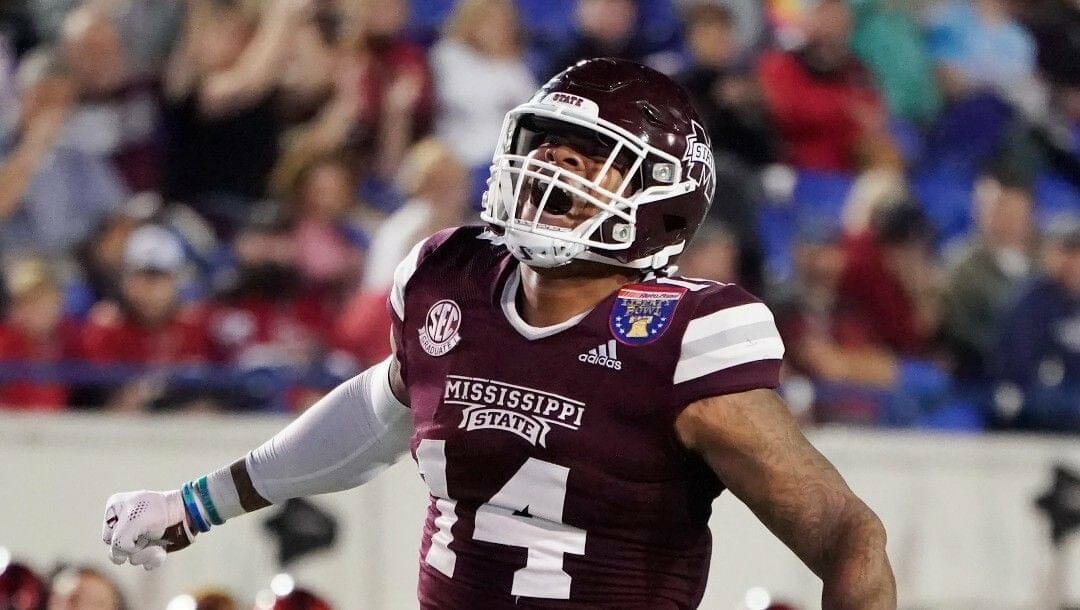 It’s Year 3 of the Mike Leach experience, and the Bulldogs hope that experience plays a differentiating factor. Ranking 20th in returning production while returning 16 starters, this is a veteran bunch. The Bulldogs had some positives in 2021, finishing 29th in total offense and 30th in total defense.

Mississippi State has an over/under win total of 6.5 in college football betting.

With an 11-13 record across his first two seasons, Leach hopes that having Will Rogers back at quarterback for the third straight year will make a difference. Rogers tossed for 4,739 yards (third nationally) while completing 73.9% of his passes. He’s shown a lot of progress but must find a new go-to target in the passing game after losing Makai Polk and his 105 receptions from a year ago.

The Bulldogs will be hungry for revenge after last year’s collapse. The Bulldogs led 17-7 at halftime but allowed 21 straight points en route to a 31-29 Tigers win.

Arizona finished just 1-11 in Year 1 under Jedd Fisch, but their numbers weren’t that of a one-loss team. They were outgained by only 15 yards per game, so they kept things close and have built some positive momentum under Fisch. Will that momentum show on the field?

Brian Kelly seemingly always fields a winning football team and now has SEC-level talent at his disposal. The Tigers have won three of the past four meetings between these two schools.

The Falcons finished just 4-8 last year but return 18 starters and have the most returning production in the country. A year ago, they knocked off a Big Ten school (Minnesota) in non-conference play.

The Bulldogs have won this matchup in four of the past six years, most recently in a 26-22 win at College Station a year ago. The Aggies have the hype of a top-10 team, maybe even more, but Jimbo Fisher will need to show results.

Arkansas defensive coordinator Barry Odom laid the blueprint for dropping eight and defending Leach’s passing scheme. It’s worked two years in a row, snapping a 7-1 run the Bulldogs had against the Hogs.

Kentucky is coming off an impressive 10-3 season and returns Will Levis at quarterback. They have a lot to replace, ranking 63rd in returning production while returning only 10 starters.

This will be a second straight road game, and Nick Saban has had no trouble with the Air Raid, winning by a combined score of 90-9 over the past two seasons.

The Bulldogs get a much-needed bye week after two tough road games to face Auburn. Mississippi State won this matchup 43-34 in Bryan Harsin’s first year on the job in 2021.

The defending National Champions return only 10 starters overall, three of which are from one of the greatest defenses in the history of the sport. They last played each other in 2020, when Georgia won 31-24 in a close game that was tied going into the fourth quarter.

The last time the Buccaneers faced an SEC team, they lost 59-3 to the Tennessee Volunteers. They finished 11-2 overall and 7-1 in the Southern Conference in 2021.

Kiffin has gotten the best of Leach so far, winning back-to-back Egg Bowls by an identical score of 31-24. Leach will hope for better success with the Air Raid against the Rebels after Rogers averaged just 5.8 yards per attempt on 58 passes last year.

BetMGM is the premier destination for college football betting each season.

With updated NCAAF odds for hundreds of games each season, you can bet on over/unders, moneylines, spreads, and more for the best online sports betting experience.