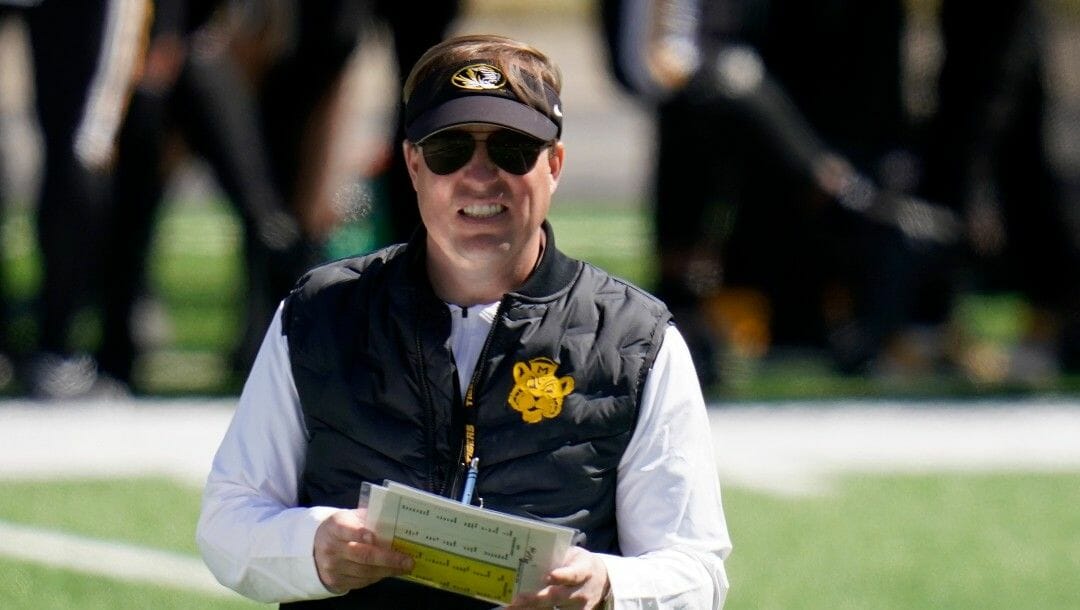 Missouri hopes to break through after finishing precisely .500 in the last three regular seasons. This season marks Year 3 of the Eliah Drinkwitz era. He has turned to new leadership at defensive coordinator (Blake Baker) after fielding an embarrassing unit on that side of the ball a year ago.

They have an over/under win total of 5.5 in college football betting.

It’s a battle at quarterback, but whoever wins the job (likely Brady Cook) will have a new star to throw the ball to in incoming freshman receiver Luther Burden. Tyler Badie departs after carrying the load offensively, but a talented group returns, and Stanford transfer Nathaniel Peat hopes to emerge as a go-to running back.

• This duo has a ton of potential & upside. Burden III is a 5 star True Freshman, his playmaking ability is unmatched. Lovett caught 26 passes for 173 yards 1 TD in 2021 as a Freshman, remember the names!! pic.twitter.com/THmFWdR7f6

Here’s a look at Missouri’s schedule with dates, times, opponents, and analysis:

The Tigers get things started with a Thursday night meeting with Lousiana Tech. This game will be the first of the Sonny Cumbie era in Ruston after Skip Holtz was fired following last year’s 3-9 finish.

This game will mark Mizzou’s first trip to Manhattan since 2011. The Wildcats rank just 105th in returning production but have hopes to surprise the rest of the Big 12.

Missouri has never lost to an FCS team and figures to make light work of a Wildcats team that lost 56-9 to SMU a year ago.

Believe it or not, this will be Mizzou’s first trip to Jordan-Hare Stadium. Auburn is coming off a tumultuous offseason involving head coach Bryan Harsin but still figures to be a tough out.

Georgia holds a 10-1 advantage in this series and enters as the defending National Champions. The Tigers have never won at home against the Bulldogs.

This 2022 schedule is certainly not easy for Mizzou. They head to the swamp in what I would categorize as their fourth challenge in the first six weeks.

A bye week followed by a home game against Vanderbilt is just what the doctor ordered after a challenging start to the season. Mizzou has won five of the last six meetings.

The Tigers hold a three-game winning streak over the Gamecocks. South Carolina hopes to surprise the SEC in Year 2 under Shane Beamer, with Spencer Rattler taking over the quarterback position.

Kentucky has won six of the last seven meetings. The Wildcats went 10-3 a year ago and return Will Levis at quarterback but lost a lot elsewhere, returning just ten starters.

Missouri has lost two of the last three games on the road against Tennessee. The Volunteers return 15 starters, including stars Hendon Hooker at quarterback and Cedric Tillman at receiver.

A cupcake matchup should get Missouri a free notch in the win column against a hapless New Mexico State squad.

Missouri had won five straight in the series until a year ago when Arkansas pulled off a 34-17 win. The Tigers lead the series 9-4 and have never lost in Columbia.