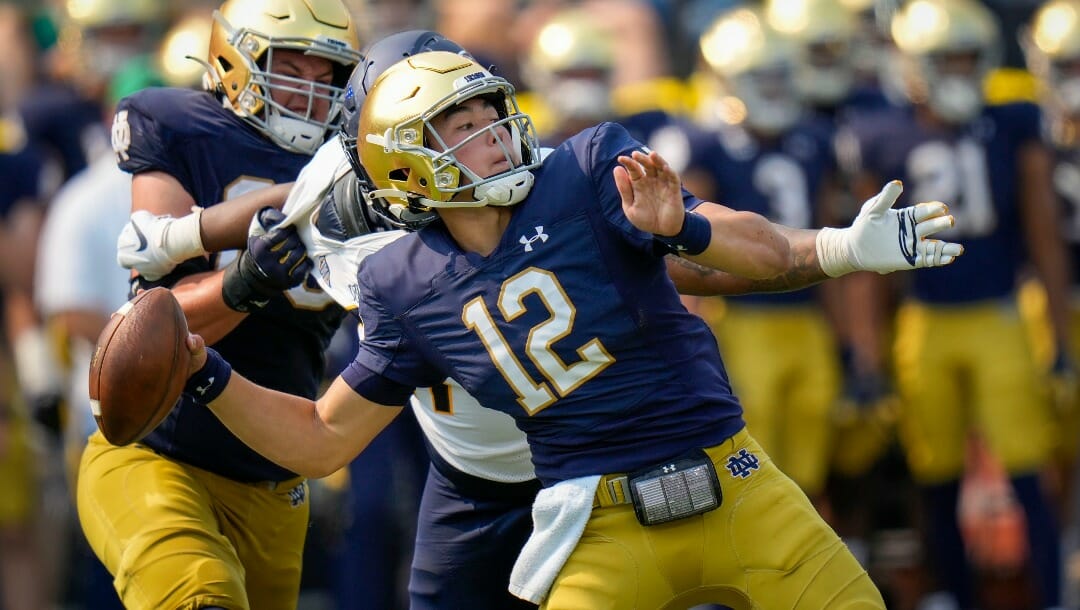 It’s the first year of Marcus Freeman era in South Bend and hopes are high – as reflected in their futures odds in college football betting – after Notre Dame made waves on the recruiting trail in the offseason.

In 12 seasons under Brian Kelly, the Irish won at least ten games seven times, including each of the last five seasons, and had one of the best ATS records (9-3) in the country last year. Notre Dame has struggled under other first-time head coaches, which Freeman will look to overcome.

Tyler Buchner steps in as the new quarterback, and he’ll have new faces surrounding him at most skill positions. The team is expected to lean on one of the better offensive lines in the country and retains Tommy Rees as offensive coordinator. Former Temple and Miami head coach Al Golden steps in as defensive coordinator to lead a unit that figures to be strong yet again.

Here’s a look at Notre Dame’s schedule with dates, times, opponents, and analysis:

The Irish head to Columbus to battle with the Ohio State Buckeyes, who rank No. 2 in the country and are led by star quarterback C.J. Stroud and all-world receiver Jaxon Smith-Njigba.

This will be a College GameDay location, the second of two Week 1 games for ESPN’s flagship pregame show.

If this game seems somewhat random to you, that’s because it is. This marks the first-ever meeting between these two schools. The Marshall Thundering Herd will enter their first year in the Sun Belt after they finished with a 7-6 record a year ago.

The first of three Pac-12 teams on the schedule, all of whom reside in the state of California. The Irish will be playing in the friendly confines of Notre Dame Stadium for this one and have won all four prior meetings by an average margin of 27.8 points.

The Irish have won four straight in this series and are 20-2 all-time against the North Carolina Tar Heels.

Sam Howell is no longer in the picture, and Mack Brown hopes for a rebound season after beginning 2021 ranked top-10 nationally but finishing with a losing record (6-7).

The Irish have an early bye week in Week 5 before heading to Las Vegas for a neutral site game at Allegiant Stadium against the BYU Cougars.

Notre Dame has won six of the prior eight meetings, but the Cougars return 19 starters and rank second nationally in returning production.

Freeman and company return to South Bend for a two-game home stretch against beatable foes.

The home team has won seven of the last 10 meetings in this series, and Notre Dame won 45-14 a year ago.

UNLV’s trip to South Bend marks the first-ever meeting between these two schools.

The Irish have won seven of the 10 prior meetings. They have won four straight in this series by an average margin of 22.5 points.

Will Dino Babers be on the college football hot seat in late October?

One of the more anticipated games of the year takes place in Week 10 when Notre Dame hosts the Clemson Tigers.

These two programs had epic battles during the 2020 season, and the Tigers are favorites to take home the ACC Championship.

This will be the second neutral site game of Notre Dame’s season as this meeting takes place at M&T Bank Stadium in Baltimore, Maryland. This will be the 23rd meeting between these two teams in the state of Maryland and the first since 2008.

The Irish have won eight straight in this series and are 17-9 all-time. Former ND quarterback Phil Jurkovec will lead the Boston College Eagles as a sneaky team in the ACC.

The rivalry game to end the season! This rivalry takes on a new twist, with Freeman and Lincoln Riley both entering Year One at their respective programs. Freeman will hope to build on Notre Dame’s 48-36-5 all-time lead in this series.