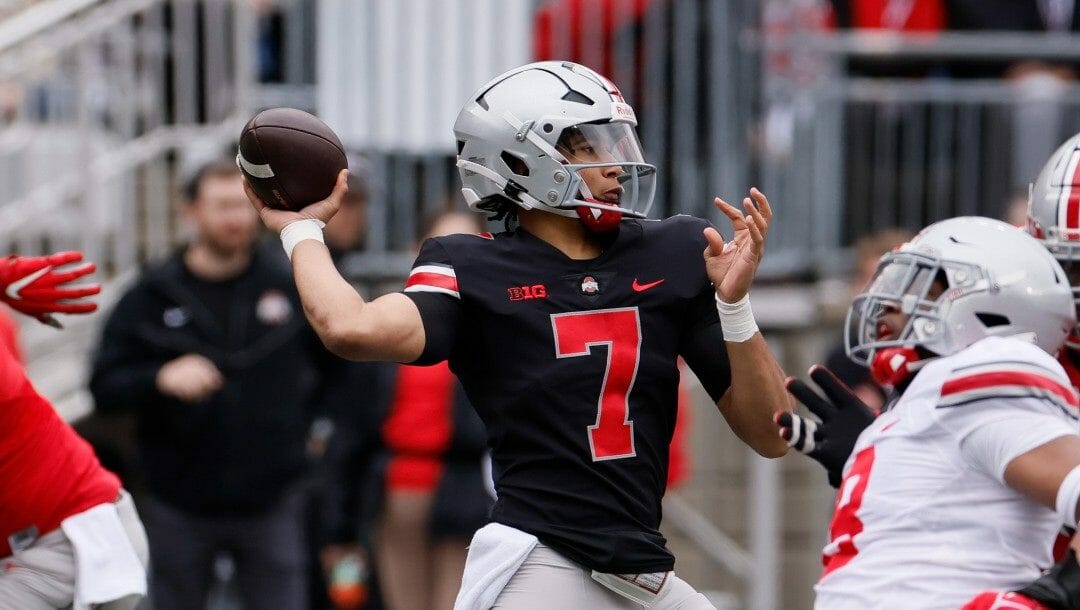 The Buckeyes look to rebound after a “disappointing” 11-2 season, which was capped off with a Rose Bowl win over Utah by getting back to the Big Ten Title Game. It was a season that saw an early season home loss to Oregon and the end to their win streak over arch-rival Michigan.

In college football betting, they are heavy favorites (-225) to win the Big Ten.

Ohio State brings back two Heisman contenders on offense in quarterback C.J. Stroud and wide receiver Jaxon Smith-Njigba. However, what improvement new coordinator Jim Knowles can make on the defensive side of the ball will determine if the Buckeyes get back to winning a Big Ten title and making the College Football Playoff.

Here is a look at Ohio State’s 2022 schedule with dates, times, opponents, and analysis:

A matchup between two of the most successful programs in the history of the sport is a treat. This game is only the seventh all-time matchup between the two powers, but only the first regular season matchup since 1996. OSU leads the series 4-2. Ohio State has an advantage playing at home against a team breaking in a new head coach and facing the challenges that come with that.

The first-ever matchup between Ohio State and Arkansas State is the perfect cushion coming off a primetime opener. The Buckeyes should cruise against a lower-tier Sun Belt squad.

Ohio State has one loss all-time against MAC foes. While Toledo is the favorite in the MAC, Ohio State doesn’t lose to Group of Five teams at home.

Ohio State has had its way with Wisconsin since 2010 by winning eight in a row, including three times in the Big Ten title game. It’ll be strength against strength for the Buckeyes, but Ohio State’s offense is far better than Wisconsin’s.

The Buckeyes remain at home in Week 5 as they host Rutgers to start the month of October. Ohio State has absolutely dominated the series winning all eight games by an average of 47.1 points.

There was a time in the last decade that Michigan State seemed to have Ohio State’s number. Things have changed. Ohio State has won six straight, including a humbling 52-7 beat down of Sparty last year. Ohio State may be an all-around better team than last year, while MSU figures to come back to earth a bit.

The Buckeyes and Hawkeyes have not met since 2017 when Iowa destroyed Ohio State’s College Football Playoff hopes, 55-24. This time the game is in Columbus, where Ohio State has won seven in a row.

This series has seemed close recently with a few great games. However, the Buckeyes have won nine of the last 10. A trip to Happy Valley is never easy, and this is one of the biggest games on the conference slate.

Two of the last three matchups have come in the Big Ten championship game. The Buckeyes have lost just once since 1972. The rare trip to Evanston should make the Chicagoland Buckeye fan base happy.

Ohio State has not lost to the Hoosiers since 1988. Despite some recent scares, the Buckeyes have too much talent to have that winning streak end this year.

The Buckeyes can’t get caught looking ahead to Michigan the following week. Maryland can score some points, especially if the OSU defense is sub-par again. However, the Buckeye offense should not face much resistance.

Ohio State is out for payback. Was 2021 a one-game glitch or a sign of things to come? The Buckeyes have not lost to Michigan at home since 2000 and will want to right the ship after last year. The winner of this game will likely go to Indy for the Big Ten championship game.