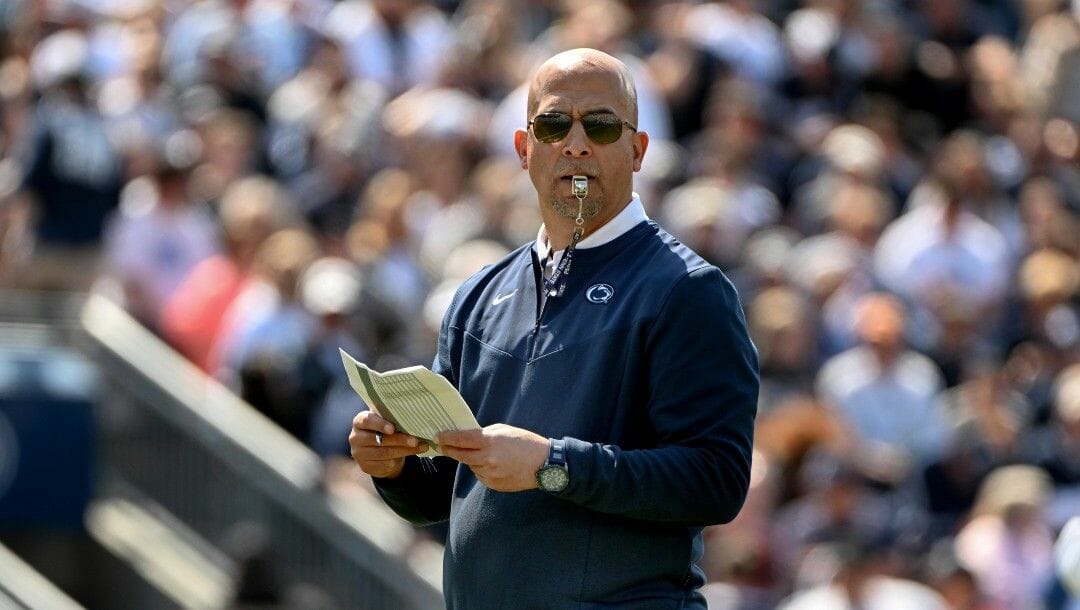 The Nittany Lions were ranked as high as No. 4 in 2021 after a 5-0 start, which turned into a 7-6 finish as the Nittany Lions lost five of their last seven games, including the Outback Bowl against Arkansas.

Penn State’s schedule is similar to 2021, with their third-straight season opener on the road against a conference opponent. There is also a trip to The Plains to face Auburn. The crossover schedule is not horrible as they visit Purdue and get Minnesota and Northwestern at home. It feels like an important year in Happy Valley, especially after how last year finished and the Nittany Lions being 11-11 over the past two seasons. They have an over/under win total of 8.5 in college football betting.

Here is a look at Penn State’s 2022 schedule with dates, times, opponents, and analysis:

Penn State has won nine in a row in the series. This game will be their third-straight season opener on the road (1-1), with all of them being against conference foes. Does Penn State have enough offense, and can the defense get enough stops to keep up with Purdue’s high-octane attack?

The last time Ohio came to Happy Valley, they walked out a winner in 2012. That was a long time ago. Penn State will have two extra days to prepare for the Bobcats. This matchup should be a soft spot in between two tough road trips.

The Nittany Lions pulled out a 28-20 win in a raucous atmosphere in Beaver Stadium. This time the game is down south in Jordan-Hare Stadium. Auburn is kind of in disarray, but it’s a road game in the SEC East.

This game is the second all-time matchup between the two programs. Again, a good scheduling move by Penn State to pad the landing after a trip to Auburn.

Penn State re-enters conference play against the Northwestern Wildcats. The Nittany Lions have lost two of the last three, including a home loss in 2014. However, that was a long time ago, and outside of 2020, PSU has been solid in October conference games.

Penn State is 7-5 against Michigan since 2008 in a series with its fair share of close games and blowouts. Last year, Michigan hung on for a 21-17 win at Penn State. Penn State is slightly less talented than Michigan, which makes this road trip difficult.

Another Big Ten Trophy Game. This one is the Governor’s Victory Bell. Penn State lost the last meeting between the two programs in 2019, and the series is a close 9-6. PSU’s win over the Gophers in 2016 helped turn James Franklin’s tenure around. Can it happen again? Also, this is Penn State’s annual “White Out Game.”

The Nittany Lions have lost nine of the last 10 in the series, most of them in soul-crushing fashion. A Halloween visit from the Buckeyes will be scary, but Beaver Stadium will be ready to rock.

Penn State got their revenge for “The Reach” in 2020. The Nittany Lions own the series, losing only twice to IU (23-2). Last season, they showed their dominance in a 24-0 shutout win. However, it’s November, and James Franklin is still the head coach.

A supposed rivalry that has been dominated by Penn State (41-3-1). It’ll be strength against strength as Maryland features an explosive offense. It’ll help to be at home, but this has a similar feel to the game against Purdue.

Penn State is 30-2 against Rutgers, which includes eight games since the Scarlet Knights joined the conference. This game will be a low-scoring affair on both sides. Penn State has allowed Rutgers to crack double-digits once (10) since 2014.

Can we get another snow game for the Land Grant Trophy? MSU broke a series tie last year with a 30-27 win in East Lansing. Penn State and Michigan State have split the past six in the series, including the previous three at Beaver Stadium. This one always flies under the radar on a day with some more established rivalries.