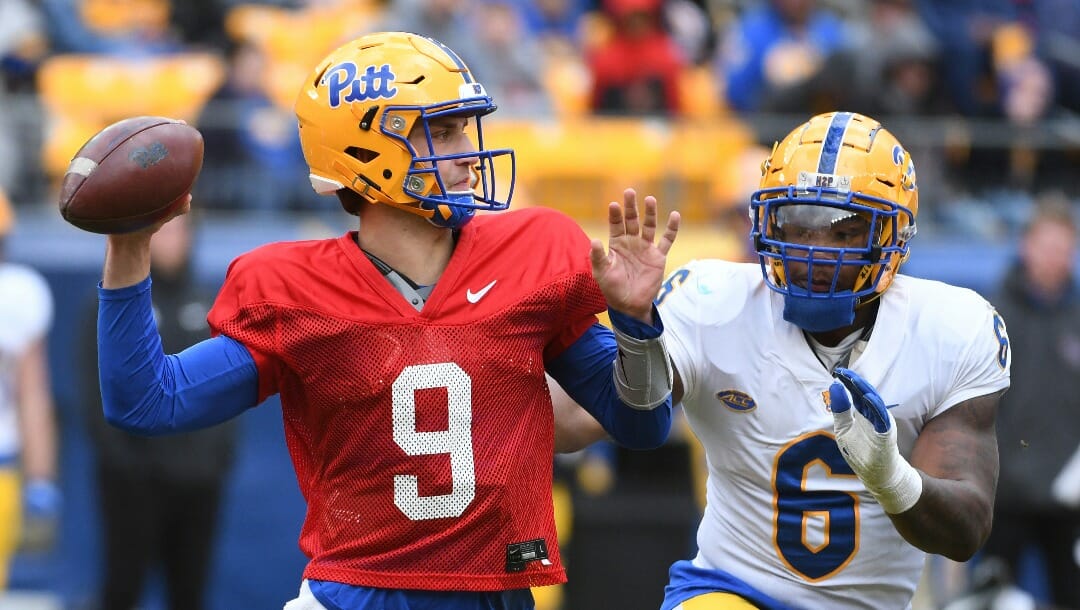 The Pittsburgh Panthers were sensational in 2021, going 11-3 overall and 8-1 in ACC play en route to a conference championship.

The offense will look much different this season as the key pieces from a high-powered passing attack that gave this team its identity are now gone, though expectations are still high, especially for the Backyard Brawl season opener, for which they’re currently a 7-point favorite against West Virginia in college football betting.

Former offensive coordinator Mark Whipple is now at Nebraska, and Frank Cignetti is back for his second stint at the job. USC transfer Kedon Slovis likely replaces Kenny Pickett at quarterback, while Biletnikoff winner Jordan Addison departs at wide receiver. The defense should remain fearsome, and 15 starters return, so Pat Narduzzi and company hope to contend in the Coastal in 2022.

Here’s a look at Pittsburgh’s schedule with dates, times, opponents, and analysis:

The Backyard Brawl is back! A Thursday meeting with the West Virginia Mountaineers gets the season started. Pitt has lost three meetings in a row, but these schools have not met since 2011.

Back-to-back challenging non-conference games to begin the season for the Panthers. Pitt has won all three meetings, including last year’s 41-34 thriller.

The Panthers will be hungry for revenge after falling 44-41 a year ago. The Western Michigan Broncos rank just 124th in returning production and will look much different in 2022.

Pat Narduzzi faces his alma mater in the first-ever meeting between these two schools.

Pitt has won four straight meetings against the Georgia Tech Yellow Jackets. Geoff Collins, potentially on the college football hot seat entering 2022, returns only eight starters, and the Yellow Jackets figure to be near the bottom of the conference standings.

This marks the Panthers’ fifth home game in the first six weeks.

The Panthers come back from a bye week with back-to-back pivotal road games, the first of which comes against the Louisville Cardinals. Pitt has won six of the last seven meetings.

The North Carolina Tar Heels have gotten the better of this matchup, winning seven of the last ten games. Sam Howell departs, and Mack Brown must show improvement after a disappointing 6-7 finish in 2021.

The Panthers have had a lot of success in this matchup, going 15-2 across the last 17 meetings between these former Big East rivals. The home team has won four of the previous six.

The Panthers have won five of the last six meetings. It’ll be Year 1 of the Tony Elliot era in Charlottesville, and he has some firepower to work with, led by quarterback Brennan Armstrong.

Pitt has won seven of the last eight meetings against the Duke Blue Devils, including six straight victories. Mike Elko could be in for a long rebuild, and this is just Year 1 of his tenure.

This matchup could decide the Coastal division, as both teams set sights on a conference championship in 2022. The Miami Hurricanes are 22-3 across the last 25 meetings.

If you’re looking to take your college football betting experience to the next level, live betting is your ticket.

Available for hundreds of games each year, live sports betting allows you to place wagers on spreads, over/under totals, moneylines, and more during the game. Whether you’re betting on Ohio State as they lead Penn State in the first quarter, Ole Miss at halftime of the Egg Bowl against Mississippi State, or Michigan State as they trail early against Wisconsin, there are options for everyone.