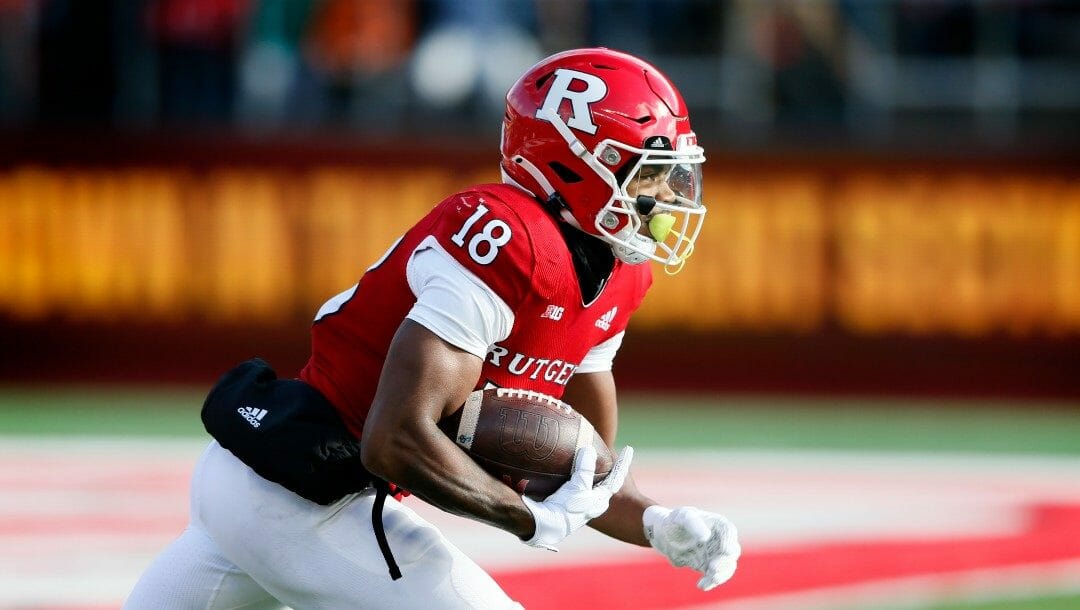 In 2021, the Rutgers Scarlet Knights reached their first bowl game since 2014, even if it was because another team cancelled. Rutgers swept their non-conference schedule and found wins at Illinois and Indiana to get to five. They played in the TaxSlayer Gator Bowl on short notice and gave No. 17 Wake Forest an early scare before losing 38-10.

Rutgers currently have tied for the worst college football odds to win the Big 10 at +300000.

Rutgers will look to get to six wins this year. Crossover games against Iowa, Minnesota and Nebraska may make that challenging, as will road trips to Boston College and Temple in the non-conference.

This marks the 4th such honor for ⁦@AdamKorsak⁩, who previously garnered the status as the top punter in the nation by the Walter Camp Foundation, Phil Steele & Athlon Sports.⁩ https://t.co/mPhu4lVotf

Here is a look at Rutgers’s 2022 schedule with dates, times, opponents, and analysis:

This is an old Big East matchup to start the year. Rutgers will travel up I-95 to play BC for the first time since 2004. Rutgers has not beaten Boston College since 1991 (0-13-1). A loss won’t sink the Scarlet Knights’ season, but a win could jump-start another bowl run.

Oddly enough this is the first time these schools have matched up. The two schools sit just 29 miles apart, or a three-hour drive in Jersey traffic. Rutgers’s last loss to an FCS team came back in 2002 against Villanova.

Rutgers has won the last five in the series dating back to 2003. It’s another regional non-conference game for the Scarlet Knights. While the game is on the road, Temple has won just four games since 2020.

Rutgers is looking for their first ever win against Iowa (0-2). It is a rare East Coast trip for the Hawkeyes. The Scarlet Knights will have their hands full with a stout Iowa defense to start the conference schedule.

Life in the Big Ten East is not easy. After Iowa, Rutgers goes out to Columbus. Any early season momentum could be crushed in a trip to the Horse Shoe.

A Friday night kickoff at SHI Stadium should be fun as Rutgers welcomes in the Nebraska Cornhuskers. Rutgers is winless in the series, but Nebraska traveling on a short week and a fired-up crowd could end the streak.

Rutgers ended a five-game losing streak when they pounded Indiana in Bloomington last season. This matchup is one of those swing games that could help launch Rutgers to the postseason.

After a two-game homestand the Scarlet Knights hit the road to face Minnesota. The Gophers lead the series 2-0, but the last meeting was in 2019. The Gophers could be in contention for a division crown while Rutgers could be looking to cement a bowl berth.

Rutgers’ first matchup with Michigan was a win. It has been downhill since, with the Wolverines winning the next seven straight contests. Could this be the year that the Scarlet Knights get back in the win column? Eh, probably not.

Again, life in the Big Ten East is not easy. Rutgers travels to East Lansing to face another brut of a foe in the Spartans. Rutgers has had some success against MSU (4-9) including a shocking win to start the 2020 season. It’s a better Spartan team in 2022 and Rutgers will be in the middle of a brutal stretch.

Outside of 2014, the games in this series have not been close.

This game could have bowl implications for both teams. Rutgers has lost three of four in the series but did win the last matchup in College Park. The big question here is can the Rutgers defense slow down the Terps enough for a win?