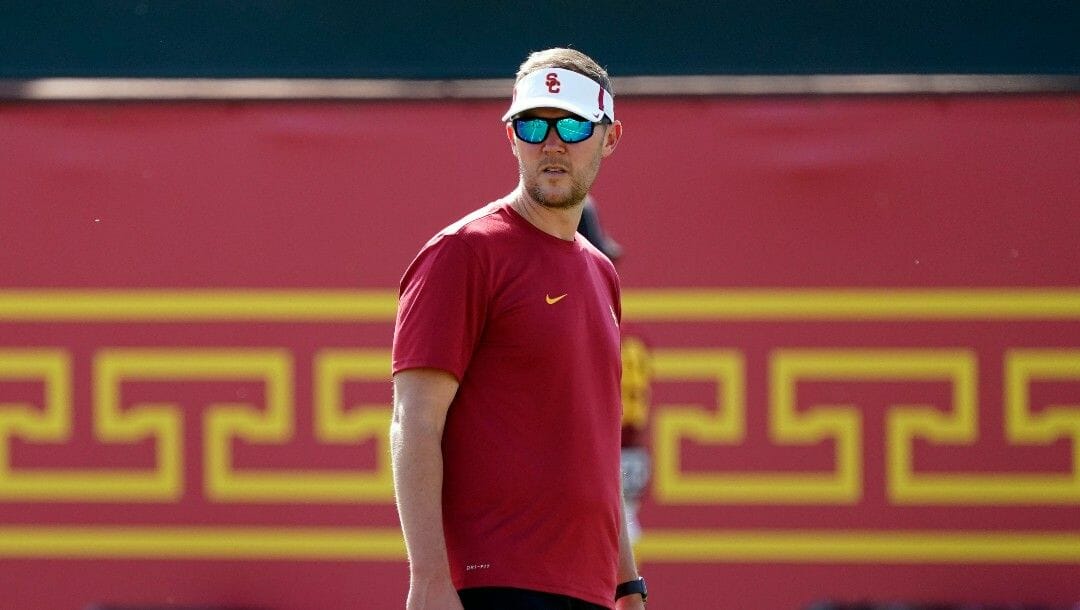 The USC Trojans are in a world of their own regarding a new look for the upcoming college football season.

In college football betting, they have an over/under win total of 9.5.

Lincoln Riley arrived via Oklahoma and completely overhauled the roster via the transfer portal. Quarterback Caleb Williams and dynamic receiver Mario Williams followed Riley from Oklahoma to sunny Southern Cal. The 2021 Biletnikoff Award winner Jordan Addison arrives from Pittsburgh, giving the offense plenty of firepower. Also, running back Travis Dye and his 1,673 scrimmage yards and 18 touchdowns at Oregon from a year ago.

USC receiver Mario Williams going through drills. Plenty expected of him for the Trojans this year after coming over from Oklahoma. pic.twitter.com/plpCjOMJEP

The offensive line and defense require plenty of work after a tough showing in 2022, but this team is loaded with talent and will look to win plenty of shootouts. Will it be enough to capture a PAC-12 title?

Here’s a look at USC’s schedule with dates, times, opponents, and analysis:

This game will be the first time these schools have played since 1971 and only the third time in history. The Rice Owls were just 4-8 a season ago and lost by 14 to Arkansas and 58 to Texas when stepping up against Power Five competition.

The Fresno State Bulldogs may play in the Mountain West, but this is no freebie for the Trojans. USC will be heavily favored but must not take Jake Haener and the Bulldogs too easy after they upset UCLA a year ago.

USC better hope Alex Grinch has shored up the Trojans’ rushing defense before this meeting with the Oregon State Beavers. Oregon State ran for 322 yards in last year’s 45-27 thrashing of USC, and Jonathan Smith almost always has a solid offensive attack.

The Trojans have won two of the last three meetings, but the Arizona Sun Devils won 31-16 a year ago. It’s a manageable schedule to begin the season, and the Trojans will hope for 5-0 after this game or at least 4-1.

The Washington State Cougars are no pushover after bringing in a potential breakout star in quarterback Cameron Ward. Washington State last won at the Coliseum in 2013, but USC has won the past three meetings.

Playing on the road at Rice-Eccles is no easy task, especially not as the Utah Utes hope to repeat as PAC-12 Champions. This showdown is momentous and could end up deciding the conference race.

The Trojans have bested the Arizona Wildcats every year since 2013. Arizona was just 1-11 under Jedd Fisch in Year 1 but should be much improved.

This contest is in the middle of a three-game stretch of manageable competition for the Trojans coming off a bye. The California Golden Bears have won two of the last three meetings but return only eight starters from a year ago.

The Colorado Buffaloes figure to be among the worst teams in the conference and typically are a much tougher out at home than they are on the road.

After a relatively calm stretch from Weeks 8 through 12 (including a bye), the competition stiffens up in the last two weeks. The Trojans will seek revenge after getting embarrassed by the UCLA Bruins 62-33 a year ago.

BetMGM is the premier destination for college football betting each season.

With updated NCAAF odds for hundreds of games each season, you can bet on over/unders, moneylines, spreads, and more for the best online sports betting experience.