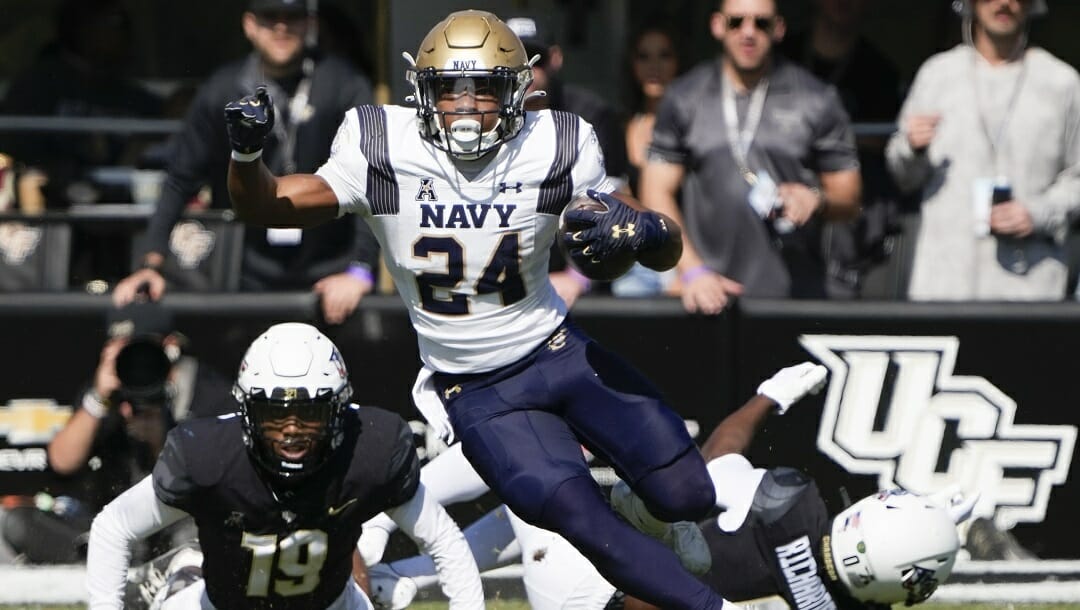 This Saturday, there’s only one set of college football odds that’ll be live on your television.

That is, of course, the 121st annual Army-Navy game.

Where is the Army-Navy Game This Year?

This year’s Army vs. Navy game will be played in Philadelphia at Lincoln Financial Field. It is not a true home game for either team.

Lincoln Financial Field, the location for this year’s Army-Navy game, is where the Philadelphia Eagles play their home games in the NFL.

Last week, Army and Navy both unveiled the uniforms they’ll be playing in during this year’s rivalry game.

Army’s uniforms honor the 1st Armored Division, while Navy’s uniforms are an homage to dozens of NASA astronauts.

Which uniform is better? 🔥

Army opened the week as a small favorite, and the Black Knights have drawn a huge percentage of marketwide tickets.

On the year, Army (5-6) has a better record than Navy. The Black Knights have a better scoring offense than the Midshipmen this year, as well as a tighter scoring defense.

Despite all that, the line has drawn down to a pick ‘em. The line has moved in Navy’s favor.

Much of that may have to do with schedule difficulty. Just look at the last five opponents that each team has played.

Navy has a far more impressive resume this year, and its record against market expectations is better, too. Navy finished the college football regular season with a 7-4 ATS record; Army was 6-5 ATS.

Public bettors jumped at a small favorite with a better record, not realizing that the other team (Navy) is the straight-up better side this year.

Army vs. Navy Total: Is This Number Finally Priced Out?

Few statistics have become as ubiquitous in recent years as the service academy under betting trend. Dating back to 2006, games involving two service academies are an incredible 43-9-1 to the under.

Now, with much of the college football betting world focusing on this one game on Saturday, everyone is taking aim at this under.

That’s exactly why the Army-Navy total is a brutally low 33 – the sportsbook is trying to protect itself from a rare public under play. Sharps and squares alike now know to mug the sportsbook with the under whenever two service academies line up against one another on the field.

In this spot, I can’t help but wonder if the number is finally too low – especially when neither of these defenses are particularly good.

I, for once, will be staying away from the under in this particular service academy game. I might even think about a contrarian over.

Army-Navy Predictions: How to Bet the 2022 Army-Navy Game

I believe that Navy will beat Army, 24-17, in a competitive game that comes down to the wire.

For more on this year’s Army-Navy game, make sure you check out The Lion’s Edge podcast for intelligent, weekly insights into trends and betting tips across the online sports betting world. It’s available on iTunes, Spotify, or wherever you listen to podcasts.

From basketball odds – like NBA odds and college basketball moneylines – and NFL odds to live sports betting and parlays, BetMGM has odds for everyone.

Is Sports Betting Legal in Pennsylvania

Yes, sports betting is legal in the Keystone State.

How To Bet Online in Pennsylvania

It’s never been easier to bet online in Pennsylvania.

Check out the sportsbook today for all available betting odds in Pennsylvania!