Can Jackson State Play For a National Championship? 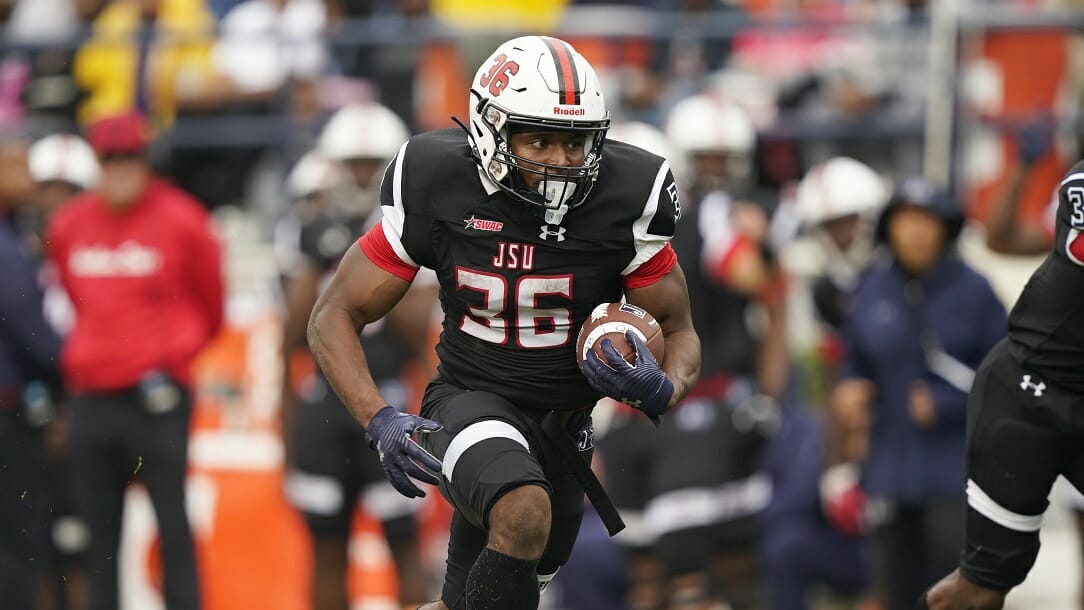 The FCS playoff bracket is set, but one high-profile team is conspicuously absent from the field.

Despite a lofty poll ranking, No. 5 Jackson State is not included in this year’s traditional playoff format. Understandably, that has many football fans asking the same question: Why is Jackson State not in the FCS Playoffs?

Why is Jackson State Not in the FCS Playoffs?

Because Jackson State won the SWAC, it will represent the conference in the 2022 Celebration Bowl instead of playing in the FCS playoffs.

Can Jackson State Play for a National Championship?

This is a complicated question, but the short answer is: Yes, Jackson State could hypothetically play for a national championship.

Every FCS conference can elect to participate in the Football Championship Subdivision playoffs, which is the postseason format that decides the Division I FCS national champion.

(Technically speaking, it’s also the only official NCAA college football championship at the Division I level – the FBS College Football Playoff is not formally recognized by the NCAA – but let’s leave that conversation for another day.)

However, a few conferences choose not to participate in the FCS playoffs for various reasons. The Ivy League, for example, doesn’t participate partly because the postseason could potentially interfere with the end-of-season exam schedule.

When it comes to Jackson State, they play in a conference that elects to send its champion to the Celebration Bowl.

Hypothetically, Jackson State could fail to win its conference – the SWAC – then receive an at-large bid to the FCS playoffs. It could then win the FCS national championship.

Separately, there is also the semantic debate over the Celebration Bowl, which is often referred to as the “HBCU National Championship.”

Detractors will argue that there is no such thing as an HBCU National Championship and that the title is made up to give added hype to the Celebration Bowl.

However, given that the annals of college football are filled with all sorts of teams claiming national championships they may or may not actually have a right to – as recently as 2017, for which UCF claims a title – can anyone really dispute the ability for schools like Jackson State to try and claim a national championship?

Is Jackson State FBS or FCS?

Thanks to an undefeated season in 2022, Jackson State is now preparing to play in the Celebration Bowl on December 17 at Mercedes-Benz Stadium in Atlanta, Georgia.

What is the Celebration Bowl?

The Celebration Bowl is the preferred postseason option for HBCU teams in the MEAC and SWAC.

Rather than play in the FCS playoffs – which often involves spending money on the NCAA’s home game bid process – the MEAC and SWAC play an exhibition game called the Celebration Bowl that has a $2 million purse, split evenly by the two conferences.

Who is Playing in the Celebration Bowl This Year?

Undefeated Jackson State (11-0) will face off against MEAC champion North Carolina Central (9-2) in the 2022 Celebration Bowl.

Unsurprisingly, Jackson State Football became immediately relevant in the SWAC once Deion Sanders took over as head coach of the Tigers program.

This is the second straight year Jackson State has gone to the Celebration Bowl. The Tigers have won 20 of their last 21 games.

Can HBCU play in the FCS Playoffs?

Yes, but HBCU aren’t just limited to the MEAC and SWAC. Tennessee State, for example, is an HBCU at the Division I FCS level that plays football in the Ohio Valley Conference.

TSU can win the OVC and earn an automatic bid to the FCS playoff field, just like most other teams at the FCS level.

Can SWAC teams play in the FCS Playoffs?

Since 2015, the SWAC has elected to send its champion to the Celebration Bowl because of the far greater financial incentives and visibility available through its TV partnership with ESPN.

It is hypothetically possible for a SWAC team to lose its conference championship but still be extended an at-large bid to the FCS playoffs, though this is rare.

Does the SWAC Champion Go to a Bowl Game?

Yes, the winner of the SWAC plays in the annual Celebration Bowl.

For more on the FCS playoff bracket and how to bet the market, make sure you check out The Lion’s Edge for intelligent, weekly insights into trends and betting tips across the online sports betting world.

This week, my good friend Sam Herder of HERO Sports joins the show to share his insights on this year’s FCS playoffs.