What are Clemson’s National Championship Odds? 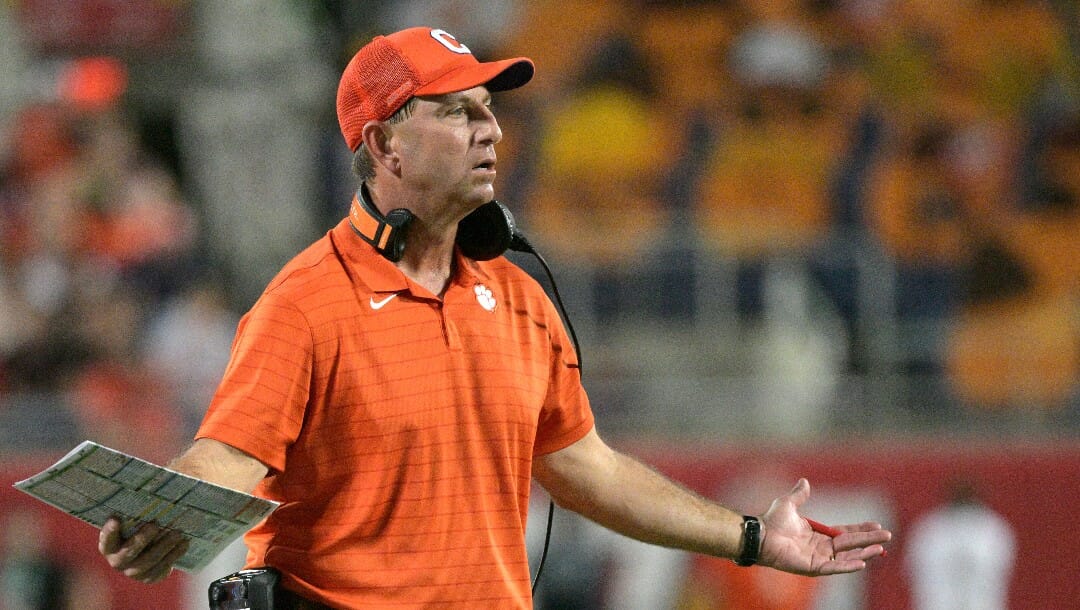 Dabo Swinney’s Clemson Tigers have established a reputation as a perennial national championship threat. Following last year’s 10-3 finish, there’s work to be done to get back in that conversation. And if college football odds are any indication of the Tigers’ 2022 season, they’re not far away from the conversation.

The offense sputtered, ranking 82nd nationally in scoring with 26.3 points per game. The betting market seems to think that was an aberration, and either D.J. Uiagalelei will get back on track after averaging just 6.0 yards per attempt and completing 55.6% of his passes, or five-star freshman Cade Klubnik will provide an upgrade.

Clemson is the favorite to win the ACC by a substantial margin, as the Miami Hurricanes have the second-best odds at +600 in the first year under Mario Cristobal.

The Tigers are in a difficult ACC Atlantic Division with challengers like the NC State Wolfpack (+700) and Wake Forest Demon Deacons (+3000). However, the latter may be hampered as starting quarterback Sam Hartman is out indefinitely.

The Tigers won the ACC Championship six straight years from 2015 to 2021 but fell short a year ago as the Pittsburgh Panthers (+900) captured the prize.

For regular-season Over bets to hit, the Tigers will need to win one game more than they did last year. That may seem like a tall ask, but it’s quite possible that Swinney’s team will be favored in every game they play.

The strength of this team will be an elite defense that is arguably the country’s best. Will the offense improve enough to get to 11 wins?

The year starts with three very winnable games against the Georgia Tech Yellow Jackets, Furman Paladins, and Louisiana Tech Bulldogs. Weeks 4 and 5 could prove tricky with a trip to Wake Forest followed by a home game against NC State, but it’s possible that Hartman won’t be back yet by Week 4.

The Tigers return 15 starters in total. Nine are back for an offense that was stuck in the mud a year ago, and six are back on one of the nation’s best defenses.

A 10-3 record isn’t considered a disappointment for many programs, but it is for Clemson. Swinney and company hope to improve upon that record this year, while bettors are anxious to see if an ugly 5-8 ATS finish last year will carry over into 2022.

BetMGM is the premier online betting destination for college football.

During the season, you can place a football bet on spreads, build a parlay, browse live betting odds, or take advantage of a sports betting promotion. Visit the sportsbook today to get closer to the action!