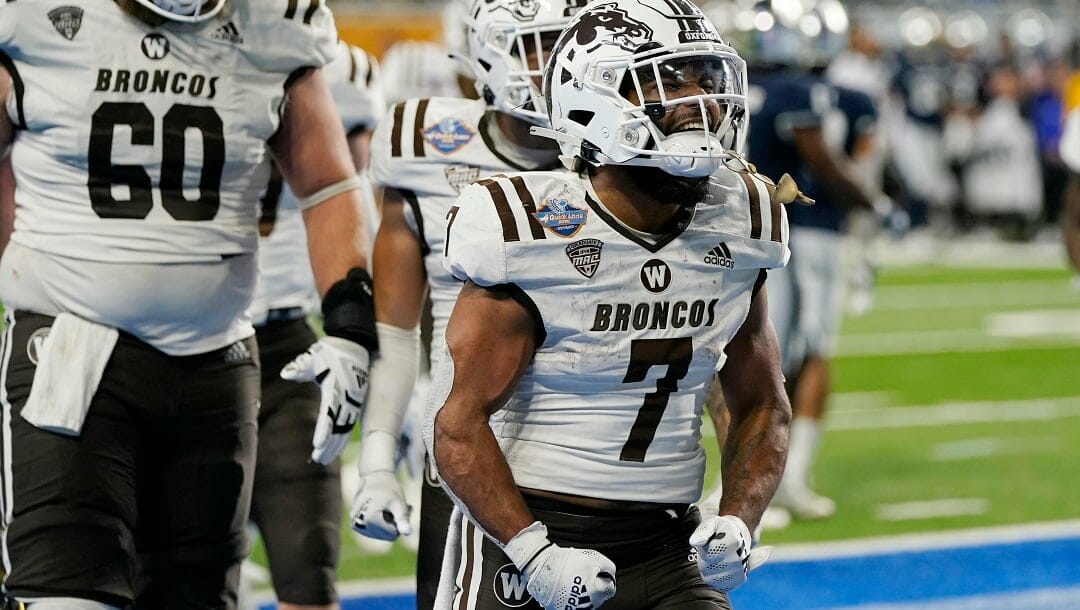 As you can imagine, I’m pretty excited. So is the rest of the online sports betting world.

Each week, after I’ve handicapped the whole board, I will publish my five best plays from the wider canon of NCAAF odds.

If you prefer an audio version of this weekly article, you can always subscribe to The Lion’s Edge,  my weekly handicapping podcast for BetMGM. More on that in a little bit.

NC State has received a ton of love this summer as an ACC title threat, which helps to account for the 80% of tickets that are backing the Wolfpack on the road. Holy public, Batman!

NC State could be really good this year. However, when you’re a road favorite of 10 or more points against a legitimately good in-state rival, I think that’s the market blowing this game out of whack. Especially when it’s Week 1, and there might be some feeling out and some growing pains.

We all know I like Mike Houston, and I was probably a little too early to the Pirate buffet because of that. But I think here in Year 4, the rebuild in Greenville is probably now complete. Houston is going to have his best team, and ECU should be live in this game.

I do think NC State’s offense will ultimately figure out a way to win this game, but I expect it to be a competitive football game for 60 minutes, and at +11.5, we might even be safe from a garbage time touchdown that pushes this thing to two scores.

Give me ECU plus the points, with a moneyline sprinkle at +325 as well.

This isn’t technically a home game for Georgia, as it’s the Chick-fil-A Kickoff game played in Atlanta. That said… yeah. It’s pretty much a home game for the defending national champs.

Oregon has a decent ATS record against SEC teams over the last several years, but the bucket of points with the Ducks seems a bit square for my liking, with about two-thirds of tickets backing the dog.

I’d play Oregon if I was forced to pick a side. However, I think there’s a much better play on this game.

Kirby Smart is a defensive head coach. Oregon’s new head coach, Dan Lanning, was the defensive coordinator at Georgia last year for the championship. The Bulldogs have lost gobs of talent from last year’s team.

There will definitely be a feeling-out period early in this game, so I went to do some work on the first-half total – currently 26.5 at BetMGM, with -130 juice on the over.

My findings definitely pointed in one direction. In the five previous season openers that Georgia has played under Smart against FBS opponents, here are the first-half scoring totals: 7, 12, 27, 21, 24.

I love this 1H under.  If you are worried about getting burned at a key number, you can buy the half-point, but this is one of the week’s best plays.

If you listened to my podcast with Phil Steele earlier this week, you’ve heard the case for negative regression in East Lansing.

Michigan State was probably the team positively impacted by luck the most in 2021, and Steele and I both expect regression to the mean here.

That doesn’t mean Michigan State will lose to Western Michigan, but these games between MSU and WMU are usually pretty competitive.

The public is way too in love with MSU, both in general and specifically in this spot – about 80% of tickets are on the Spartans, and the line has moved down from its opening price of -19.

I spotted this number at 22.5 on Wednesday, and I was hoping the deluge of square action might push this thing all the way toward 23 or 24. But the sharp action finally got wind of this, and I had to get off my hands.

This is the back end of a home-and-home that went to Memphis last year, and that was a weird game. Memphis ultimately won in a small outright upset – MSU was -3 – but the game shifted to Starkville this season.

Let me admit up front that I have modestly high expectations for Mississippi State this season in an absolutely loaded SEC West. I think I’m early to market here on MSU actually being pretty good now that Leach has built up the kind of roster that he needs to be successful.

The biggest flag that Mississippi State is better this year is the point spread comparison. Last year, MSU was just a three-point road favorite; this year, it’s laying north of two touchdowns at home.

Some of that is the “Week 1 SEC vs G5” effect, but I think the rest of it is that MSU is probably the best team in the state this year.

There’s also this nugget: Since Ryan Silverfield took over the program, he’s 2-7 straight up and 0-9 ATS in true road games. So there’s that.

If you’re betting MSU like I am, make sure you do it at the BetMGM online sportsbook – they’ve got the best number on the board. Most other books have moved this to -16 or -16.5.

It’s just not a good matchup for Syracuse, and there’s a big gap in talent. On top of that, I’m pretty sure Malik Cunningham will be the best quarterback in the ACC this season.

If this game were in November, Louisville would be laying double digits. Instead, it’s Week 1, and the market doesn’t know what it doesn’t know. Grab Louisville here at a great number. This is going to go to -5 or -6 before kickoff.

Every week, in addition to these five picks, I’m also going to provide a college football parlay for bettors to consider.

I’m partial to three-team moneyline parlays that land around the price of a regular straight bet.

TCU is playing at Colorado, and the point spread has absolutely exploded from where it opened. The Frogs are -500 on the moneyline.

Wyoming – fresh off its shellacking at the hands of Illinois last week – is hosting Tulsa this week. The Golden Hurricanes are -250.

Let’s throw those two favorites together, then mix in Ohio State to beat Notre Dame at -750.

That college football parlay offers a price of -111, which is right where I want to be when I build a moneyline parlay.

You can always click here for more information around how to bet a parlay.

Want to check out the full Week 1 podcast? Don’t forget to subscribe to The Lion’s Edge for intelligent, weekly insights into trends and betting tips across the online sports betting world. It’s available on iTunes, Spotify, or wherever you listen to podcasts.