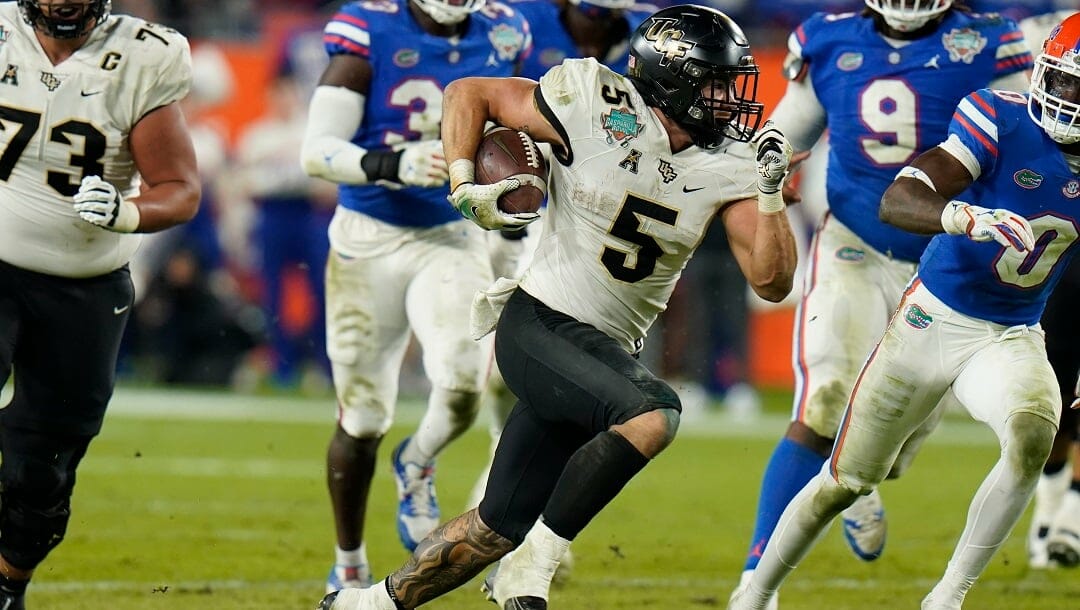 Week 2 of the college football betting calendar has arrived, and I’ve got a fresh crop of picks to hand out.

I don’t want to waste any time, so let’s dive right into it.

Each week, after I’ve handicapped the whole board, I will publish my five best plays from the wider canon of NCAAF odds.

In Week 1, the picks went 2-3. Fortunately, better days are ahead this weekend.

The only thing I was just flat-out wrong about in last week’s college football bets was Louisville.

I don’t want to overreact here and blindly fade Louisville… but UCF definitely seems like the right side of this bet.

This one comes down to preparation and rest. This game is on Friday night, which means very different things for UCF and Louisville.

UCF played its opener against South Carolina State last Thursday, so they have extra prep time for this.

On the other hand, Louisville played in upstate New York  Saturday night. The Cardinals would have a short week by anyone’s standard; that goes double for this spot, when UCF has a greater-than-average amount of practice lead.

I don’t know what’s going on with Malik Cunningham and Scott Satterfield, but even if they get their issues from last weekend straightened out, they’re still in a horrible spot for this game.

It’s hard to form too many definitive conclusions about teams this week in the season, but I do feel pretty confident in my assessment that North Carolina’s defense is quite bad.

Enter Georgia State, who would have likely played South Carolina within one score last weekend if not for a pair of late blocked punts that were  returned for touchdowns.

That game was much closer than the final box score indicated. Georgia State actually led in the third quarter.

I’m not sure if Georgia State can win this game outright, but I do know that the backdoor is always open when playing against a defense as bad as UNC. Seven and the hook is still available here at the BetMGM online sportsbook, too.

Some ticket & handle split info here, just to really drive the point home: Only 37% of tickets are on the Panthers, but more than 80% of the overall spread handle is on Georgia State +7.5. This is a classic square/sharp differential.

This is a fascinating game profile because of how both teams fared in Week 1. Old Dominion  upset its visiting P5 big brother, while East Carolina did not. Hashtag college kickers, am I right?

As a result, all 37 ODU football fans are thumping their chest about their coming wins in Sun Belt East play.

A trip to Greensville should dispel that pretty quickly. Winless East Carolina is a 12.5-point favorite over undefeated ODU.

I’m not recommending a play on the side here, since I do think there are better sides to target in the college football odds market. (I do have the ECU moneyline in a couple of parlays, though.)

However, I am recommending a play on the total. In Year 4 of the Mike Houston experience, that defense is very real.

I expect ODU’s anemic offense to struggle mightily, and ECU will play ball control in the second half.

I was all over the Florida moneyline play last week, and this is typically a spot where I would look to jump off the bandwagon and sell high on my Gators stock.

I came in on Florida at -4.5 on Tuesday, and the market has since pushed it back to Florida -6. That’s about as high as I’m willing to buy. If this goes to Florida -7 or -7.5 before kickoff, I might look to buy back on Kentucky and play for a middle.

This is my absolute favorite play of the week. as mentioned in our weekly BetMGM staff college football picks article.

San Jose State got outplayed by Portland State last week and was lucky to escape with a win. Now, the Spartans head east to Auburn, where they will be thoroughly dominated on both sides of the ball by a much stronger, fiercer football team.

This week’s college football parlay is a moneyline  four-teamer that’s going to net out a price of about +120. The legs:

Boise State is the biggest chalk on the ticket here, as the Broncos hit a get-right spot in New Mexico after opening the season with a loss to Oregon State. BSU has won its last three meetings with New Mexico by an average of more than 30 points per game.

Northwestern draws a bad Duke team with an extra week of rest and prep after beating Nebraska in Ireland.

Mississippi State – one of my favorite SEC targets from the preseason and futures market – heads to Arizona for a little Pac-12 after dark.

West Virginia will take out its post-Brawl frustrations on a Kansas team that’s definitely improved but not nearly as talented as the Mountaineers.

Want to check out the full Week 2 college football podcast? Don’t forget to subscribe to The Lion’s Edge for intelligent, weekly insights into trends and betting tips across the online sports betting world. It’s available on iTunes, Spotify, or wherever you listen to podcasts.